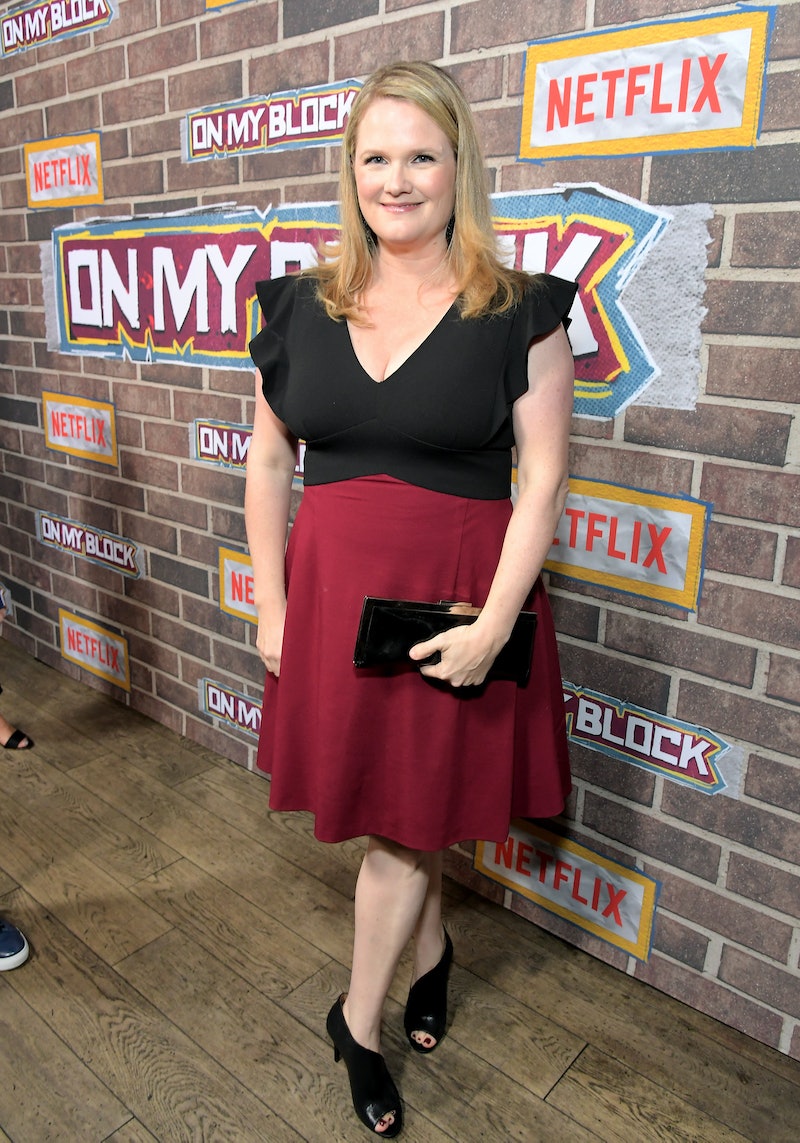 In Bustle’s Q&A series 28, successful women describe exactly what their lives looked like when they were 28 — what they worried about, where they worked, what they did for fun, and what, if anything, they would do differently. On My Block co-creator and showrunner Lauren Iungerich opens up about following her dreams and what advice she'd give her 28-year-old self.

"It's OK, I'm a big crier," Lauren Iungerich tells me during our phone conversation in early March. We're simultaneously sob-talking about her father, who died in January, and how glad she is that she saved his mundane voicemails about whatever he was thinking about that day. "My father called me all the time to talk about things that were so boring. I mean, so boring," she groans through a sniffled laugh. But the “feeling of anguish” she experiences when she listens to those voicemails is also the perfect reminder, at 45 years old, to be present in her day to day life, something she wishes her younger self had done just a little more.

A California girl through and through, Iungerich grew up in Rancho Palos Verdes before attending Claremont McKenna College. By 28, the On My Block co-creator and showrunner was “living the dream,” as she puts it, in Los Angeles in 2002. She had some stepping stone successes in the industry in the early aughts, whether she was grading scripts for a production company or acting as an assistant on film sets. She also picked up part time work at her dad's law firm to pay her rent.

It wouldn't be until almost a decade later in 2011 that she would get her first, real, big break as the creator and writer of MTV’s Awkward. That role would eventually lead to co-creating and showrunning her cult-favorite Netflix series, On My Block, in 2018, which subsequently turned into an overall, multi-year deal with the streaming service which she signed earlier this month.

Below, Iungerich reflects on how being 28 and struggling to make it as a writer got her to where she is now.

Can you set the scene? What were you doing when you were 28?

I was living in Los Angeles and had all kinds of jobs. I worked part-time for my father's law firm. I was reading scripts and doing coverage [of them]. I was writing my first feature and I sold the project [to Icon Productions, Mel Gibson's production company]. So basically, I was juggling multiple jobs in order to live the dream.

So did you have any fun at all at 28? It sounds like a lot of working.

I traveled and took trips with friends. I also exercised a lot. I went on long walks, hikes, and I used to run marathons. And I spent a lot of time dreaming and workshopping ideas with other creative friends.

What was your dream job back then?

I wanted to write for a living, it was just that simple. I just wanted to enjoy telling stories and be able to pay my bills and live a comfortable life. I really wasn't [saying], 'I wanna be a showrunner' or 'I wanna take over the [entertainment] business.' I just kind of wanted to make a living and be happy.

What were you most worried about when you were 28?

My mom gave me this amazing advice when I decided to really pursue writing as a living. She told me to give myself a year of a personal sabbatical and to just write my heart out, without judgement. And at the end of the year, I could look back at what I accomplished, not throughout, but at the end, and see if I was on a path or if I even still liked it.

I had goals and structure, but I put all the judgment and self-criticism away and I wasn't competing with anyone but myself. I really lived in that advice and was cautious not to criticize myself, as I was a work in progress.

Is there anything that you would go back and tell your 28-year-old self to do differently?

I wish I had been more present in my day-to-day life, not looking forward, not looking behind, but just being where I was while I was there. I'm trying really hard now to do that in my life.

How did you view getting older when you were 28 and has it changed?

It didn't hit me until I was 30, because I wasn't where I wanted to be when I was 30. A lot of my friends from college and from home were married or starting to have children at 30. And I was single, still trying to live the dream, struggling, and recalibrating the friendships that were on the same trajectory as mine. Processing age then wasn't depressing it was more like, "Wow, this rite of passage is here, this is where I'm at in my life."

Now, I have just been trying to make the most of every minute of every day and every experience, have the gratitude, and look to manifest magical thinking at all times. I'm trying really hard to make peace and be present with where I'm at and living in my blessings and not in what I don't have or what I'm afraid of. Just trying to be as fearless as possible to find sanctuary.

More like this
At 28, Rosie Perez Risked Her Career To Stop Playing Stereotypes
By Gabrielle Bondi
At 28, Debra Jo Rupp Was Living A Much Different '70s Show
By Grace Wehniainen
Ozzie’s Coming Out Scene With Kitty On 'That ’90s Show' Has Twitter Sobbing
By Brad Witter
Watch Kelly Clarkson Sing A Taylor Swift Breakup Song About A Toxic Relationship
By Alyssa Lapid
Get Even More From Bustle — Sign Up For The Newsletter
From hair trends to relationship advice, our daily newsletter has everything you need to sound like a person who’s on TikTok, even if you aren’t.