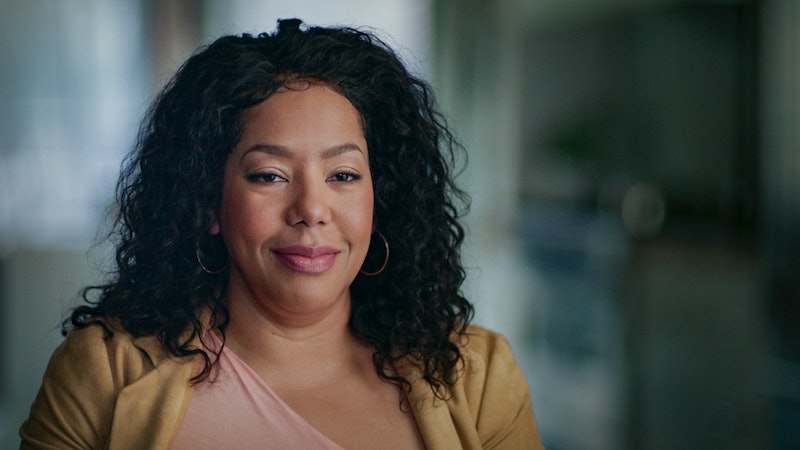 Sheri Sher is an American hip hop pioneer. As a founding member of the first all-female DJ and rap group "Mercedes Ladies," formed in 1976, Sher, has been at the forefront of the hip hop music genre since its inception. She's also one of multiple women who have accused music mogul Russell Simmons of sexual assault or rape. And in the new documentary On the Record (available on HBO Max now), Sher and a number of Simmons' other accusers come forward to share their story with the world. (A legal representative for Simmons did not respond to Bustle's request for comment. In the past, Simmons has consistently denied all allegations against him.)

As Sher reveals in the film, one night in 1983 she met Simmons at a club where Sher told him that Mercedes Ladies was "looking for some serious management." Sher says that Simmons told her that he had heard of them and started working with the group. After about three or four months, Sher says, Simmons invited her to see his new office. She was under the impression that they were going to talk business.

"Then next [thing] you know I'm pinned down to the couch," Sher alleges in the doc. "I'm trying to force him off of me. It happened so fast; he had his pants down. He just took what he wanted."

In 2008, Sher wrote a novel of the same name about her time in Mercedes Ladies. Sher changed her lead character's name to Shelly Shel, that way the book could include a rape by a famous music mogul, without Sher having to name the alleged rapist in reality.

After the book's publication, Sher says that she ran into Simmons. Simmons told her, "'I know you have a book out. I [heard there's] some sh*t in there,'" Sher tells Bustle. "Then he says, 'Yeah, I'm going to read it.' And then gave me his number for me to call him, but I never called him."

Sher says now that she felt like her career was affected by her experience with Simmons, especially when it came to shopping around her book for a film adaptation. "I was realizing that the lesson was, you know, he's still big in the hip hop game, so nobody's going to want to touch the story or this amazing book in case it's Russell in there. Somebody said to me, you may not think Russell had a hand, but maybe he did," she says.

Though Sher wasn't ready to name Simmons in her novel, what eventually made her publicly come forward years later was finally learning that she wasn't alone. "I just kind of drowned it out. I suppressed it. I never knew nobody he did this to. So in 2017 I got a call from my friend who knew everything and she [told me to turn on the news], she said it's about Russell," she says. "And I changed. All of these women had decided to come forth and I was just in awe. After that, people started calling me and said Sherri, it's your time. You need to tell your story and tell the truth because you've been holding it too long."

Telling her story On the Record was overwhelming, according to Sher. "I see myself and the pain and my eyes," she says of watching herself in the doc. "But I overcame it and I still stand. He didn't break me. So it was kinda overwhelming, but it was me based on my fear of being so vulnerable and showing myself to the world."

As for what’s next for the artist, Sher is ready to keep creating. "I just kept on doing my dreams and my craft and my, in my mind nothing's going to stop what God has for me," she says. "I knew I had to go through a lot of things to be strong enough to face the giant and let those fears go. [This is] a cleansing for me, it's a healing for me. I'm moving on and continue to be and do the things that I was meant to do with that virus out of me."