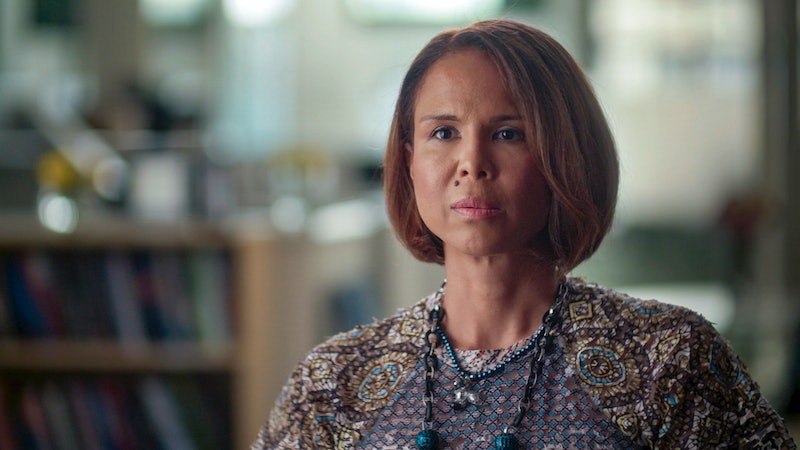 Sil Lai Abrams has devoted her life to activism in the realm of sexual assault as well as gendered and domestic violence. As a writer, speaker, and organizer, she has challenged the representation of black women and girls in the media and sought to reduce gender-based violence in the black community.

Then, two years ago, Abrams finally got to tell her story as a survivor. In a 2018 interview with The Hollywood Reporter, Abrams accused music mogul Russell Simmons of allegedly raping her in 1994. (A legal representative for Simmons did not respond to Bustle's request for comment. Simmons has consistently denied all allegations against him.) Abrams had been a model in her younger years, and briefly worked as an executive assistant at Simmons' Def Jam Recordings, the story details. She had a casual sexual relationship with Simmons in the early '90s, then moved out of New York City for a few years before returning in 1994 — when the alleged sexual assault occurred.

Now Abrams is letting her voice be heard once more, appearing in the HBO Max documentary On the Record, which offers a look into the allegations against Simmons and is available to stream now.

In The Hollywood Reporter, Abrams tells the story of the night she alleges Simmons raped her. She also details another experience of sexual assault, this time by A.J. Calloway, the Extra host who has been accused by a number of other women and since dismissed by Warner Bros. (Calloway issued a statement via his attorney at the time of the allegations saying, "Mr. Calloway maintains that these unsubstantiated allegations are patently false. He vehemently denies that he ever assaulted anyone and looks forward to clearing his name.”) The alleged Calloway abuse occurred in 2006, when they were working together on a fundraiser.

In the mid-2000s, Abrams pivoted to a career in activism, which has included writing two books and working with the Take Back the Night foundation. Though she spoke out about her assault throughout her time as an activist, it wasn't until 2018 that she named her abusers. "Coming forward and doing the work without anyone knowing who my perpetrators were was not a difficult position because it has generally been a very healing, empowering path for me," Abrams tells Bustle.

Her decision to keep the names of the men who had allegedly assaulted her a secret all changed, she says, when multiple women started accusing film producer Harvey Weinstein of sexual assault. She watched to see how things were progressing and decided to come forward, though it wasn't easy.

"I was terrified. I remember calling up a friend of mine who knew and I was hysterical. I was just crying and saying, 'I don't want to do this, but if I don't, I'm a coward,'" she says. "How can I have [made a career] out of being a survivor and encouraging women to stand up and remain silent? And when Russell attempted to position himself as an ally of #MeToo, that just sparked a fire within me that made me say, 'Hell no.' I will do whatever it takes, even if it means I'm throwing myself in front of this bus without knowing what's going to happen to me."

Coming forward has been challenging for Abrams, particularly for her career. "There has been a blacklisting of me for insisting that my story be told and speaking up. I have had a public career in the gender violence arena for a long time before actually naming my perpetrators," she says. "So I can see how different the public responds to you when you're somebody who works in this space and your perpetrator is presumed to be an 'average guy,' and then how perceptions shift and your intent becomes questioned because they happened to be men with some fame and notoriety."

Nevertheless, Abrams is just as committed as ever to bringing justice to Simmons. "If there's ever a moment where an [accuser of Simmons'] assault does fall within the statute of limitations, decides to come forward, I will absolutely offer to testify to his pattern of behavior," she says.