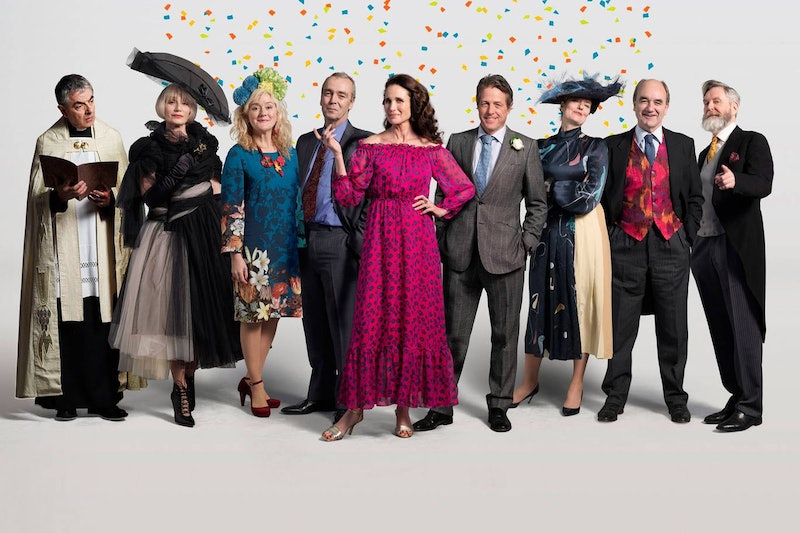 Public Service Announcement: Richard Curtis has done it again. In 2017, for Red Nose Day, the iconic director brought us a sequel to everyone's favourite Christmas film Love Actually and, this year, he's got something equally amazing up his sleeve. Twenty five years after the release of the rom-com Four Weddings And A Funeral, fans are finally getting the spinoff they've been dreaming of. And Curtis has just revealed a tonne of amazing backstage secrets from One Red Nose Day & A Wedding that will make you even more excited to watch it.

It's hard to believe, but it's been a quarter of a century since the release of Four Weddings And A Funeral, so you'd be forgiven for needing a little refresher on the original plot: the story revolves around unmarried Charles (played by handsome Hugh Grant) and his group of friends. Charles meets an American woman named Carrie (Andie MacDowell) at a wedding and falls in love with her, but she marries someone else. The love story between Charlies and Carrie plays out of the course of (you guessed it) four weddings and a funeral, and *spoiler alert* they eventually they end up together.

The sequel, titled One Red Nose Day & A Wedding, will star many members of the original cast, including, of course, handsome Hugh, as well as Andie MacDowell, Kristin Scott Thomas, John Hannah, Rowan Atkinson, James Fleet, and many more.

In his piece for the Radio Times, Curtis explained how he got various members of the cast together. Speaking of the two leading lovers, he said:

"First, we had to check with Hugh and Andie MacDowell: Hugh lives just round the corner, so that was easy, and Andie has been in England filming recently and was happy to return. I think we got lucky because we shot our little follow-up just before Christmas and lots of people had finished work for the year."

Curtis joked about Grant's performance: "Hugh had trouble remembering his character — but then he put on a pair of glasses and it all seemed to come back."

Talking about the process of writing the spinoff, Curtis said:

"The next thing to do when everyone had said they were free was to actually write the new Red Nose Wedding script ... [W]hat was tricky was making sure EVERYONE had some kind of line or joke. I’d forgotten quite how many characters there are in Four Weddings. Eventually we had 24 returning characters and I wanted everyone to do something fun. It was a lot to fit into a two-day shoot, and some beloved characters only manage a tiny moment, but at least they are all there."

The Notting Hill director confirmed that even some of the most minor characters in the original film are getting to spotlight in his spinoff:

"There was a particularly magical moment when Nicola Walker — now the star of Unforgotten and River and Spooks — reprised her role as 'Annoying Girl Singing Annoying Song by Barry Manilow,' which was her first EVER movie part 25 years ago.

And if that doesn't get you excited enough, wait until you hear what else Curtis had to say about Walker's cameo in One Red Nose Day & A Wedding: "This time she sang with a new, exceptionally famous singer whose name I can’t reveal but has had over a billion streams on Spotify — so he really KILLED the song."

Curtis described the two days of filming as "surreal," and revealed that, during a particularly moving moment, "there were some tears and some wiping away of them."

And MacDowell admitted to the Radio Times that she too got emotional, saying that she was "teary eyed" throughout filming. She continued: "It’s kind of silly but when you get older and you have the opportunity to be put back into a similar situation with these people who you had such a close connection to and you had such good memories of, it’s really affecting". MacDowell also talked about her "connection" to Grant saying that they see each other "a few times a year" and have a "huge bond." ...I'm not crying. You are!

If this spinoff film is half as emotional or fun as the filming sounds, we're in for a real treat.

So, what about the plot?! Well, at the end of the original Four Weddings, Grant and MacDowell's characters engage in a lifelong commitment of not being married to one another, so it doesn't look like the Red Nose Day sequel will feature their wedding. However, with rumours that Lily James will be starring as their daughter who's getting wed to none other than the incredible Alicia Vikander, Red Nose viewers have something seriously magical in store!

Catch One Red Nose Day & A Wedding as part of BBC One's Comic Relief on March 15 at 7 p.m.