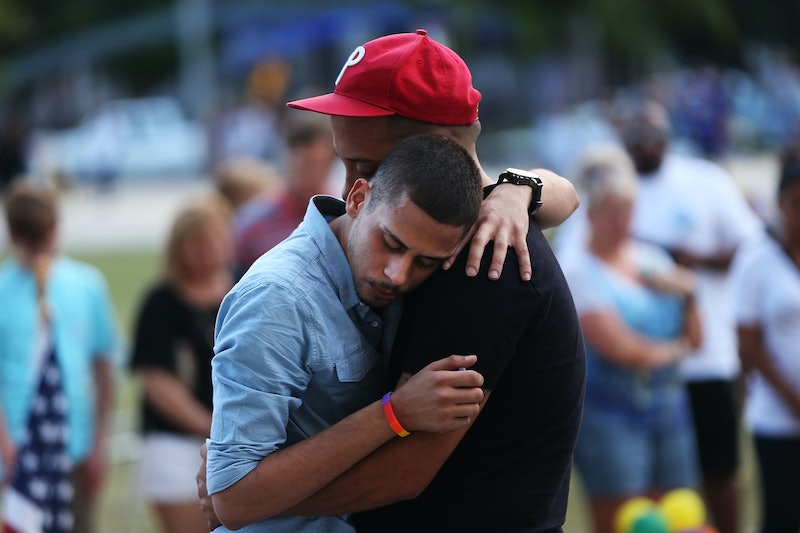 One of the most famous epitaphs in American history, written in 1778, is etched on the grave of a young sailor frozen to death by a violent winter storm in Plymouth Harbor. "And now Lord God Almighty," it reads, "just and true are all thy ways; but who can stand before thy cold?" I've known this epitaph for years, and when the news of the Orlando Pulse massacre came through, one year ago today, it resurfaced in my mind. Who can stand before the horror of a situation like this? What can you possibly do, when the world has borne down on your loved ones with horrendous force? That epitaph is a cry of helplessness, and in the wake of Orlando, it was a familiar feeling. I curled up in a ball and cried for hours. This was not an uncommon reaction.

Many things follow death: questioning, feeling ravaged, raging, wondering whether you'll ever fix your heart, grieving wildly in inappropriate places (I kept weeping my little queer heart out at candlelit vigils, and whenever I saw any of the names of the 49 victims on the news — and whenever small joyous things like gay choirs appeared, showing love and hope).

But for humans, mourning is also about ritual. We cannot stop or pause death, so we shape it, and make it understandable — though sitting shiva, staying up all night at wakes getting drunk, weeping and pouring dust on our hair, and many other ways. If nothing else, the twelve months since June 12, 2016 have demonstrated the power and necessity of mourning the queer dead.

We said their names, and knew their photographs. We recognized that so many of them were so young. And Latinx to boot, with the intersectional difficulties of being queer people of color. We demanded that attention be paid to their lives.

But part of the work of mourning was, and is, in explaining to non-queer people why this hit so many of us so hard, particularly if we hadn't known any of the victims personally. The full tragic grip of it was difficult to make clear: that it was an intimate assault, and that for many LGBTQ people, clubs were one of the only places where they experienced true safety and love, belonging, and a sense of freedom and community. So many of us had been young and gay in strobe-lit places just like Pulse. The world outside the club, beyond the glitter and the sticky floors, could be harsh, rejecting, or heinously violent. But in there, we were really breathing for the first time, standing fully in the reality of ourselves.

Mourning validates life and demonstrates love. While we have carved safe spaces in which to flourish and love, in many places the chill of violence still hangs over LGBT lives. To stand against that, mourn loudly. Mourn well.

Even if we were privileged enough to have a safe everyday existence, places like Pulse were an escape, and an unapologetically gay space. It could have been (and in fact was) any of us on the dance floor that night. Those kids died alone and afraid, in the sole place where they were supposed to be safe.

The practice of openly mourning Orlando has revealed more than ever the uniqueness, and agonizing fragility, of queer experience. When I heard the news about the one victim whose family rejected his corpse, I had to leave the room.

The 12 months since the Pulse massacre have also been a year in which the world has shown the continuing dangers of being an LGBTQ person, and the miseries of grieving them. Gay men in Chechnya are being persecuted for their sexuality, with reports stating that more than 100 gay men have been arrested and several murdered (this is in addition to the area's history of "honor killings," where gay men are murdered by family members). In Indonesia, two gay men were publicly caned this year for having sex, after a number of others reported government persecution. A religiously-motivated stabbing attack at Jerusalem Gay Pride left one teenager dead and five other people wounded. The head of Bangladesh's only LGBT magazine was violently murdered with a machete last year.

In the wake of tragedies, people tend to use the rhetoric of speechlessness: "I don't know what to say," "It's unspeakable". But the deaths of LGBTQ people cannot be unspeakable.

They all join Orlando's 49 as the legion of queer dead massacred year after year for their sexual orientation. But mourning these other victims is harder: how can you hold a funeral and grieve if there is no body, if you cannot speak the person's name in your country without being arrested, if their very death is never officially acknowledged? Queer death is still, in too many places, silent, and unable to be fully seen. In some regions of the world, the body lying unclaimed in Orlando is the norm, not the exception. Which is one of the reasons why it is so important that those of us who can loudly mourn the queer dead, do.

In the wake of tragedies, people tend to use the rhetoric of speechlessness: "I don't know what to say," "It's unspeakable". But the deaths of LGBTQ people cannot be unspeakable. The act of not speaking is an act of violence against the LGBTQ community; the demand for silence, conformity, and self-punishment is what fuels the heinously high rates of suicide attempts among young American LGBTQ teens (twice that of their heterosexual peers). Pulse was a place that spoke gayness out loud — and the kids who died alone and afraid there were killed for speaking it aloud, with their bodies and their voices.

So when it comes to honoring Orlando and mourning the many queer people slaughtered every year for the temerity of attempting to be true to themselves, merely standing tall before the cold is not enough. Shouting before the cold, singing before it, naming every person and their lost chance at life, giving everybody a grave even when the ground is frozen over, is what matters. Mourning validates life and demonstrates love. While we have worked hard and carved safe spaces in which to flourish and love, in many places the chill of violence still hangs over LGBT lives. To stand against that, mourn loudly. Mourn well.