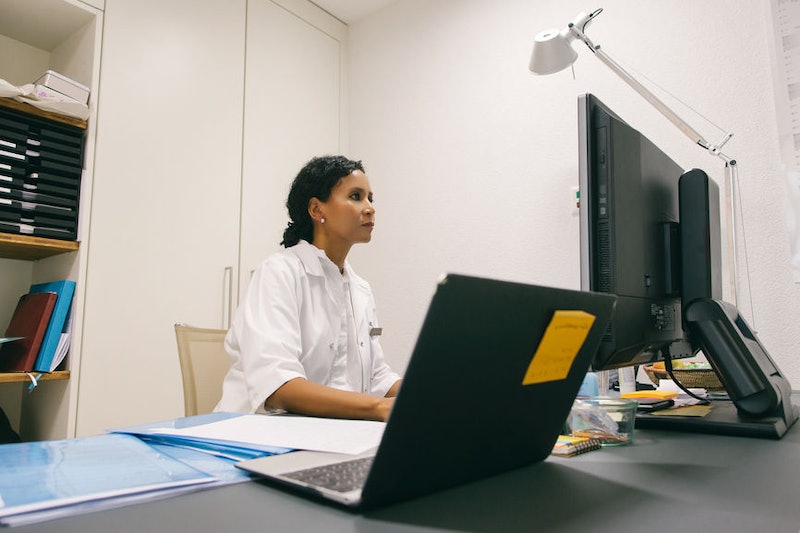 Although it's true that many women are now moving into what were once male-dominated fields, that doesn’t mean that attitudes and assumptions have moved with them. Research conducted by LinkedIn has revealed the kind of gendered assumptions Brits still make about job titles, and the results pretty are startling. The study found that only five percent of us associate the word “doctor” with a woman, despite the fact that 44 percent of doctors in the UK are women. While I feel there is now more support than ever for women to train in the field of their choice, I also know that when I go to my local doctors surgery and my GP is a woman, I do a little internal cheer. Is it because I automatically expect it to be a man? This research would suggest so.

Linkedin asked 4,000 adults in the UK about their assumptions when it comes to job titles and gender. A press release sent to Bustle revealed that more traditional job titles tended to be associated men. For instance, 64 percent of respondents believed the job title of farmer to be male. In contrast, modern job titles tended to be less gendered. For example, 77 percent of people said they didn’t associate any gender with the title of "SEO (search engine optimisation) specialist."

“We’re all guilty of making assumptions about people every day, whether that be about the way they dress, speak, or, as this research shows, the job they hold. We hope that by raising awareness of the gendered assumptions we unconsciously hold, we can help our LinkedIn community discuss their experiences and ensure nothing gets in the way of advancing their career and finding the perfect role for them.”

As well as the assumptions surrounding job titles, there are also entire industries that are seen to be either male or female. LinkedIn's study found that 29 percent of respondents associated the "business, consulting, and management" industry with men compared to only six percent who associated it with women. Four percent of respondents saw "IT and telecoms" as a female industry compared to a massive 42 percent who associated it with men.

While some will find these statistics shocking, those within industries that are typically gendered may not. LinkedIn spoke to a female doctor about their findings: “This new research from LinkedIn comes as no surprise to me as I’ve often had people assume that I am a man when I go by my professional title,” Dr. Natasha Larmie told them. “It’s frustrating that so many of us still have these ingrained assumptions at a time when there are actually a large number of female doctors working in the UK.”

One sector that looked pretty balanced was media and journalism, with 17 percent of respondents associating it with men and ten percent with women. However, when asked about the job title of "journalist", 26 percent associated it with men, more than double the number that associate it with women. Interestingly, however, there appeared to be a discrepancy in age when it came to these assumptions. When respondents were broken down into age ranges, it was found that only two percent of those over the age of 55 associate the title of "journalist" with women in comparison with 28 percent of 16-24 year olds.

The study found that one in ten women have experienced someone expressing surprise at their career due to their gender. It sucks to know that, while it feels like massive strides have been made to get women into newsrooms, boardrooms, offices, and other workspaces, they are still being blocked out by people’s assumptions. It begs the question: where are these assumptions coming from? Dr. Natasha Larmie has an idea:

“Women are still not well represented at the top of our profession, which may explain why people assume that most doctors are men. I think we have all been guilty of making unconscious gender associations at some point or other, and it’s only by talking about this issue and discussing ways to address it that we’ll make real progress on avoiding gendered assumptions in the future.”