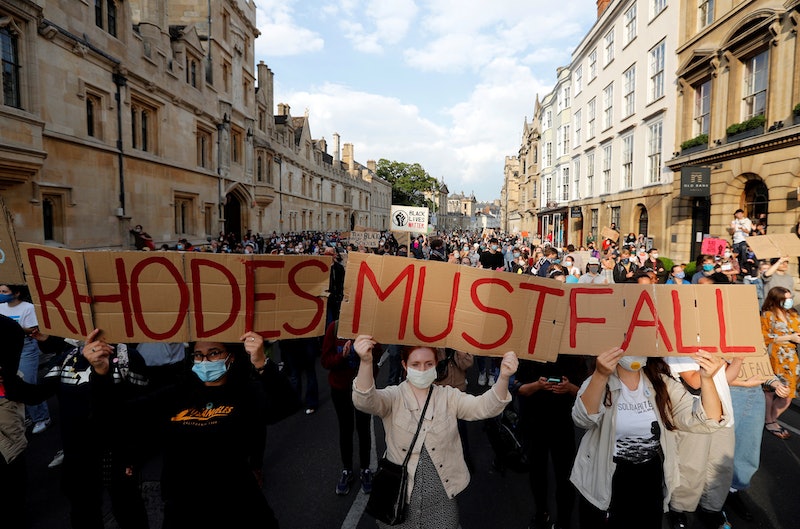 The most recent Black Lives Matter protests have reignited discussions around anti-Blackness and wider, systemic racism in the UK, and many are demanding once again that Education Secretary Gavin Williamson decolonise the national curriculum as one means of tackling the problem. It’s been four years since the first Rhodes Must Fall protests, but calls to remove the statue at the University of Oxford are now louder than ever, bringing to light the fact that universities play a large part in deconstructing deep-seated racism in the UK. However, only a fifth of universities in England say they are planning to decolonise their curriculums.

Many academics and students report that universities have failed to grasp thus far that decolonising the curriculum goes beyond the token inclusion of a select few Black, Asian, and minority ethnic (BAME) and non-Western writers to reading lists, the Guardian's report reveals. They want to see a fundamental reconsideration of who is teaching, what the subject matter is, and how it’s being taught. The reform should involve challenging and remaking the current pedagogy, according to those who spoke to the Guardian, which is “rooted in imperial and colonial ideas about knowledge and learning, at an institutional level.” It’s about challenging long-standing biases and omissions that limit how we understand politics and society.

“Critics suggest that by decolonising you’re erasing history, but in fact you are just accurately portraying history,” 21-year-old Sabrina, an international relations student working to decolonise the curriculum at her university, SOAS, told the Guardian. “If you look at the way in which the British nation has been constructed, it’s very much been an exclusionary space, an exclusively white space.”

Twenty universities declared that they were currently doing no formal work to reform their syllabuses. In response, race equality specialist Sofia Akel told the Guardian: “I think the universities that have just outright said no were probably the ones being the most honest because when you really drill down, it can come down to one or two academics, or a humanities subject, usually sociology, maybe anthropology.”

Universities and higher education institutions have also been put under mounting pressure to modernise their curriculums and address the attainment gap between students. The June Guardian investigation comes after figures released three months earlier by the Office for Students, the higher education regulator for England, revealed stark differences in student experiences. The data, collected over five years, disclosed huge variations in how universities admit students and award degree classifications based on their sex, economic background, and ethnicity, “with the figures showing especially wide gaps in attainment for Black students compared with other ethnicities,” for example.

Black Students’ Officer at the National Union of Students Fope Olaleye has called the lack of progress “shocking.” Speaking in regards to their June investigation, Olaleye told the Guardian: “Decolonising the curriculum means providing an accurate portrayal of history and providing students and staff with the tools to critically identify [how] the university reproduces colonial hierarchies. This will empower them to confront and reject the status quo and ensure knowledge production reflects our diverse society.”