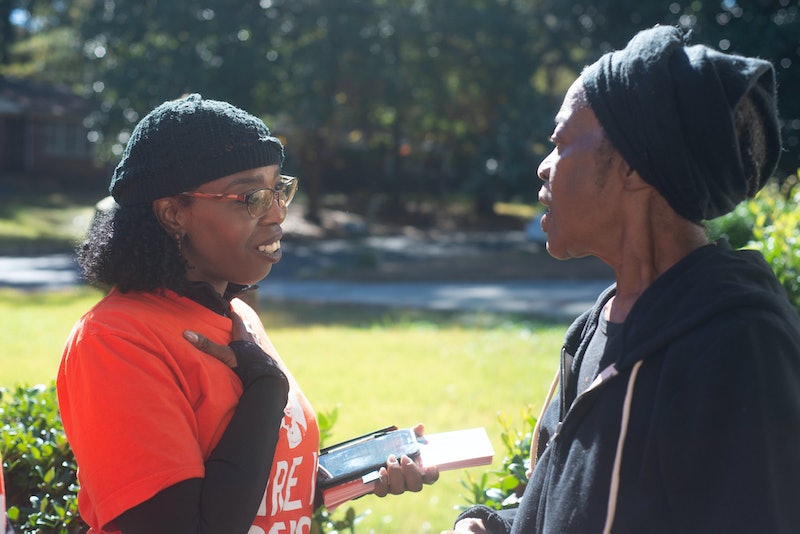 In this op-ed, Care in Action, which works on behalf of more than two million domestic and care workers across America, explains what Stacey Abrams’ campaign meant to domestic workers.

In October 2017, a small group of us — nannies, house cleaners, and caregivers — who heard a Black woman was running for governor of our state decided to come meet you. We were curious and excited.

We prepared a whole list of questions for you. Why were you running? What was your vision for Georgia? How would you change our state? You shared your personal story and the values your parents raised you with: the importance of family and hard work. You shared why you believe in public education, why you would expand Medicaid, invest in mental health services, and keep rural hospitals open.

We felt seen. Many of us cannot afford healthcare, and our lawmakers have been fighting to keep us from having it. Our children attend schools that are falling apart from disinvestment. Some of our family members are caught up in the criminal justice system. Your family story, your career of service, your struggles, triumphs, and vision for the future gave us hope that the Georgia we knew to be possible could be just around the corner.

At the end of the meeting, one of us asked you, “What do you think you need to win?” After what felt like a long pause, you said, “I need Black women to step forward and say they’re ready to win.” Without saying as much, you told us, “I will fight, but you must fight, too.” We took that as a call to action.

Georgia is the birthplace of the domestic workers’ movement, where nannies, cleaners, and care workers have fought for basic dignity and respect for generations. At the height of the Civil Rights movement, to join the National Domestic Workers Union led by Dorothy Lee Bolden, you had to pay $1 and register to vote because our leaders understood the power of the vote.

Calling forward our history, we formed an organization called Care in Action. For the months leading up to the election, we knocked on doors, made phone calls, and sent text messages to voters in all corners of Georgia, from rural to urban and suburban areas. Hundreds of Black domestic workers and supporters mobilized more than 250,000 voters. Georgians who have been pushed to the margins — Black, Latinx, and Asian women, people of color, working-class people, young people, and low wage workers — inspired us all. And we sought to make our voices heard like never before.

Our challenges were great. Voter suppression came in many forms. Secretary of State Brian Kemp oversaw his own election. He purged 340,000 voters from state registration rolls, many from Black communities. Since 2012, he’s cancelled more than 1.4 million registrations.

On Election Night, we brought food and water to voters so passionate about casting their ballots that they waited for hours in long lines at polling places with understaffed or malfunctioning voting machines. There were many people there who don’t vote that often, but knew that this was the time to take action. They stayed in that line because they believed in you like we do, but more importantly because they believe in our shared vision for Georgia and the country. We witnessed historic turnout among Black voters, particularly Black women. The grassroots energy and mobilization was undeniable.

You said it best on Friday: “As a leader, I should be stoic in my outrage and silent in my rebuke. But stoicism is a luxury, and silence is a weapon for those who would quiet the voices of the people. And I will not concede because the erosion of our democracy is not right.”

Stacey, you have the support of the people of Georgia. You ignited fire in our hearts to fight for our voices to be heard, a fire that will never be suppressed. Civil Rights leader and historian Dr. Vincent Harding once said, “I am a citizen of a nation that has yet to come into being.”

There are at least 30,000 domestic workers in Georgia, and more than two million of us nationally. We could not be more proud to have supported your historic campaign for governor. We believe in our shared vision now more than ever. And we believe this is just the beginning for you and for us. We will continue to meet your challenge to step forward toward victory. Our Georgia — our America — has yet to come into being, but we are more committed than ever to fighting for it with you.

The nannies, cleaners, and care workers of America