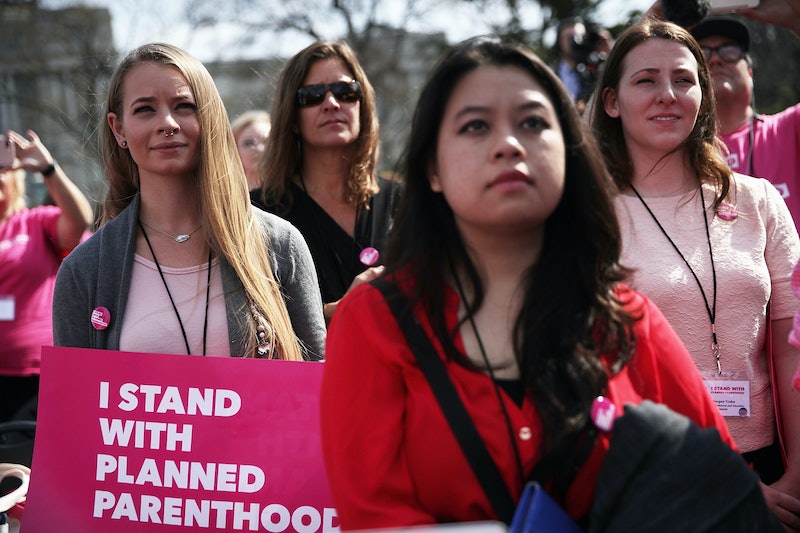 I get it. You don't like abortions. You don't want me, or anyone else, to be able to get one. You don't want them to happen in the country, or anywhere. However. To the pro-life women who want to defund Planned Parenthood: Why do you value the lives of aborted fetuses more than the lives of women in need of care.

Because, really, that's what you're saying. That's the inherent value judgement that you're expressing, whether you admit it yourself or not. Many have noted how the pro-life movement seems to abruptly stop caring about life after a baby is out of the womb, but this case is less theoretical. You're literally trying to make it difficult, if not impossible, for millions of vulnerable women to receive necessary care — just because you don't approve of one procedure that Planned Parenthood provides. Does that not bother your conscience?

If a woman ends up with advanced-stage breast cancer because she couldn't get in to get a breast exam and then doesn't survive it, was her life worth your opposition? What if another woman puts off getting her pap smear because her local Planned Parenthood clinic had to shut down? What about the thousands of women who go there for pre-natal care? Are they and their unborn children not deserving of high quality health care, just because of your misguided belief that Planned Parenthood uses your tax dollars for abortion services?

It doesn't, by the way. Abortions are a tiny portion of the services that Planned Parenthood provides, and their contraceptive services in particular are estimated to prevent well over 200,000 abortions a year. Is that not what you want?

But I reckon I'm wasting my time spouting out numbers and statistics about what Planned Parenthood does and doesn't do. They're all readily available, just not from sources you trust. You've already decided which sources you trust, and it's the Paul Ryans and the Mike Pences of the world. But then ask yourself — why do you trust them so much more than the women who have actually benefitted from Planned Parenthood? You can find their testimonials all over the place — here, or here, or here.

If you read through them — which I recommend that you do — you'll find that the grand majority of women go there for something besides having an abortion. Maybe it's birth control, which they can then use to prevent an abortion in the future. Maybe it's mental health counseling after a sexual assault. Maybe it's screenings for ovarian cancer. Men also benefit from Planned Parenthood — do you think they're going there for abortions?

Who will it help? Certainly not the anti-abortion cause, because abortions would go up significantly without Planned Parenthood providing birth control. Certainly not the federal budget, because those unplanned pregnancies cost a pretty penny.

The simple truth is that you wouldn't benefit from it; no one would benefit from it. It's a political move that can only stand to hurt people, and the people who will get quite literally hurt are the ones who are the least prepared to deal with it.

Be pro-life. Don't get an abortion. Teach your children to do everything they can to avoid ending up in that situation. But at the same time, spare a thought for the women who find themselves going through the metal detectors at a Planned Parenthood clinic, not because they want to, but because they literally have no other option. Don't let your beliefs in this matter lead you to try to strip people of the healthcare that they need. And remember — if you ever need something that Planned Parenthood can provide, they'll be happy to do it.

More like this
How The City Healed Five Years On From The Manchester Arena Attack
By Ella Glover
Chelsea Woody On Shattering Stereotypes In Surfing
By Leah Groth
Plan C Vs. Plan B: What's The Difference?
By Lexi Inks
The Little Princess Trust Is Accepting Afro Hair Donations For The First Time
By Tomi Otekunrin
Get Even More From Bustle — Sign Up For The Newsletter