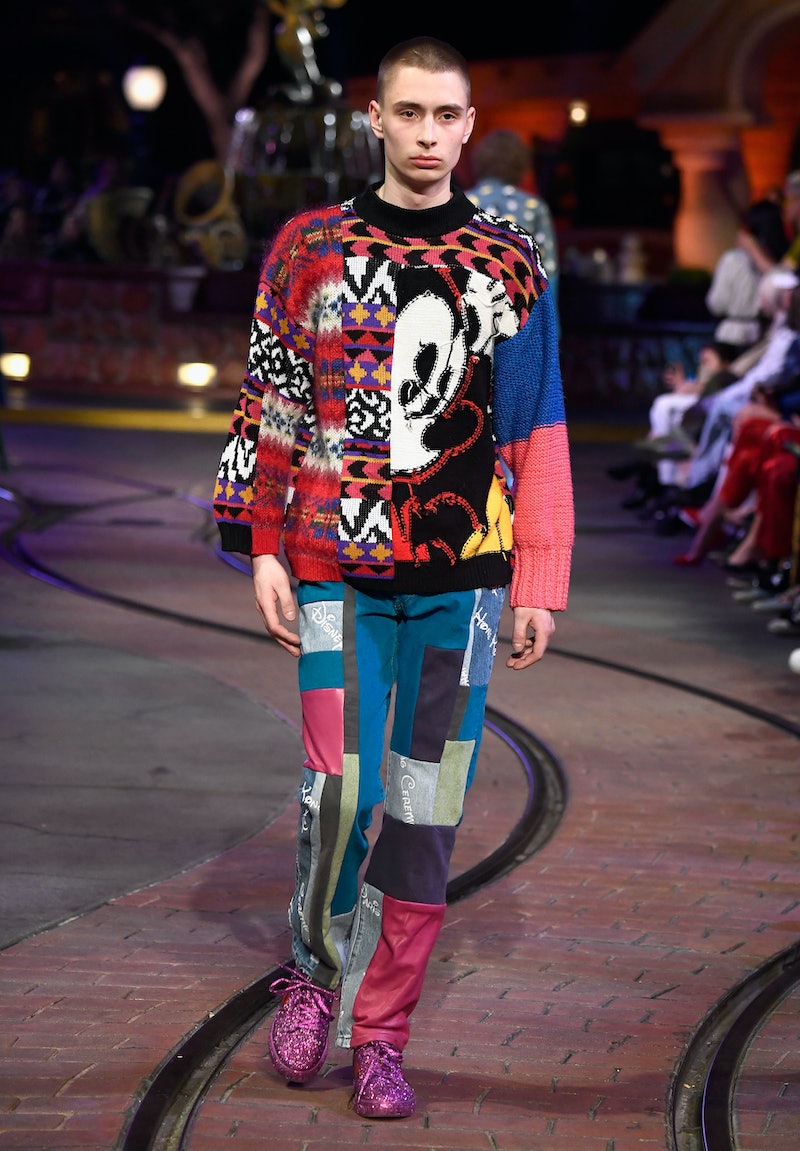 Opening Ceremony was one of the most hotly anticipated labels to see during Fashion Week, but it didn't appear on any of the usual catwalks. Opting out of cities like New York and London, the designers instead chose to share their new spring 2018 collection in a memorable way: by turning Disneyland into their runway.

Opening Ceremony's Disney clothing line was showcased on Mar. 7, along with the rest of its season's looks. The show was broken up into two parts: the first being its designer collection, and the second being the Mickey Mouse inspired collaboration. The show was accurately named “The Happiest Show On Earth,” and was held in Mickey's Toontown, really hitting home the theme.

The retro-looking collection was inspired by the "True Original," Mickey Mouse, and is celebrating his 90th birthday. The event marked the first fashion show at Disneyland in over 40 years, and the designers — Carol Lim and Humberto Leon — brought an urban and edgy twist to the iconic character.

Set at night with the brick catwalk wrapping around a Mickey Mouse fountain, the models walked out in the spring collection to hectic electro music. When it was time for the Disney collab to come out, the change was marked with a marching band appearing out of one of the townhouses, and Mickey and Minnie following not too far behind. Leaving their iconic red short shorts and polka dot dress at home, Mickey instead wore a sleek Letterman jacket with the words "The True Original" on the back, and Minnie had a sheer leopard-print dress.

After they took their spin down the catwalk, the models came out in their fun AF Disney line. Seriously, this isn't a Disney collab like you've seen before. Reinterpreting vintage Mickey Mouse art, the collection features structured satin dresses where the shoulders are poofed into black Mickey Mouse ears; red and white striped crop top and bicycle short combos paired with fuzzy Mickey print jackets; and neon Disney-stamped sweatsuits, it was a creative and retro collection.

But the Disney references went deeper than just the clothes — they were also added to the hair and nails. Holli Smith, a Bumble and Bumble stylist, was the person behind the hair, and she wanted to pay homage to Mickey without being overly cheesy. The answer to that was to create high-sitting buns.

“We felt we couldn’t miss the opportunity to do the ear thing. However, it felt a bit obvious, so we decided to elevate it by making it look more natural, in a way that the girl did it herself,” said Smith. “The collection has a sweetness factor to it, so we wanted to counter that and provide a harder, more gothic look and achieved this via a higher bun." She felt the lower a bun is, the sweeter it looks, whereas the higher the bun is, the harder it comes across.

The nails were just as mouse-focused, where nail artist Naomi Yasuda worked with China Glaze to create a medley of black and white and colorful manicures. For the black and white nails, she painted a few fingers in a greyscale motif — making you think of classic Mickey Mouse from the 1920s — with a few fingers donning pop out mouse ears with the icon's face.

Then to mix things up, a few models walked down with a pop-art version of the same design, sporting colorful and slightly acid-trip-like manis.

Everything about this show was fun, truly living up to the label of “The Happiest Show On Earth." And the best part is that you could already shop the collaboration on Opening Ceremony and Disney’s websites. Celebrate Mickey's 90th in style, and treat yourself to a streetwear inspired wardrobe. He would approve.