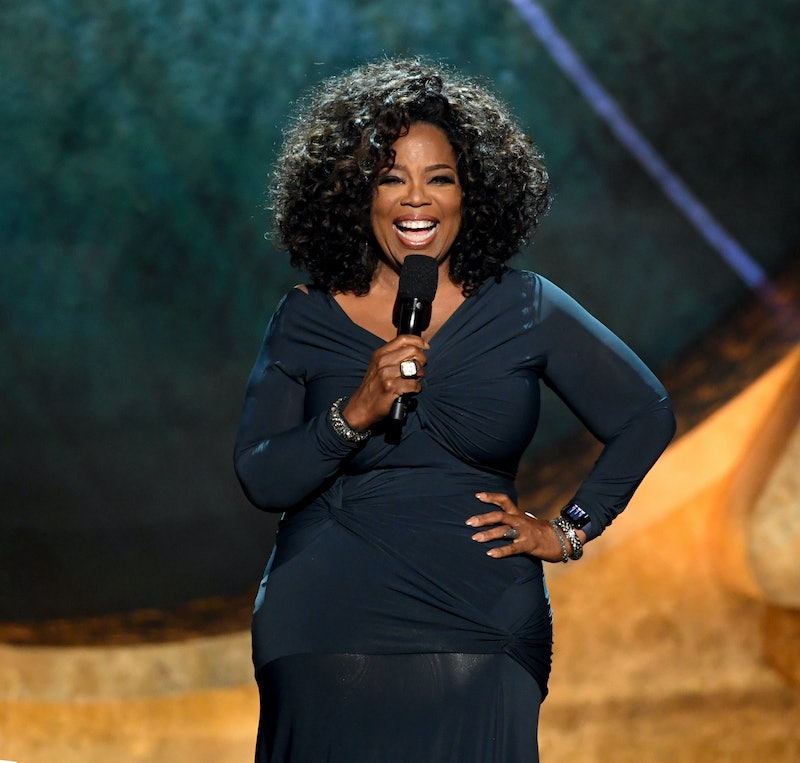 If you've been on Twitter in the past week, chances are good that you've seen a vintage video of Oprah Winfrey making the rounds. In the clip from 2006, Oprah tries an award-winning chicken recipe, only to appear dismayed at the lack of seasoning. Now, Oprah has responded to the viral chicken video — and it sounds like she stands by her original reaction.

The now-infamous chicken video was originally posted by BuzzFeed writer and community manager Spencer Althouse on Saturday. And after the tweet brought in more than 63,000 retweets and 202,000 likes, Oprah made an Instagram video about the old clip. O, the Oprah Magazine published a video of Oprah addressing Spencer directly, and she explains what she was really thinking about that unseasoned chicken. She starts off the Instagram video by saying,

"Okay, Spencer, I don't know whatever made you pull that tape out of the vault, but it made me laugh. And here's the deal. This is what I was thinking. I always wanted anybody who came on the show, no matter what they did, to have a good experience. And I also wanted to stay in my own truth while allowing them to have that good experience."

Oprah's next statement suggests that her "truth" includes not leaving your chicken bland. She continues in the video,

"So I was, um, having a moment of trying to decide, 'Do I want her to have a great time, what is my real moment of truth?' Because the truth for me was that I am used to having salt and pepper on my chicken. That's just the truth. That's what I was thinking: 'This chicken needs some salt and pepper.'"

If there was any doubt that Oprah was not a fan of this apparently prize-winning chicken, well, it sounds like the actor and talk show host really didn't enjoy that on-camera taste test.

As BuzzFeed explains, the original video features a guest appearance from Anna Ginsberg on a 2006 episode of The Oprah Winfrey Show. Ginsberg had apparently submitted a chicken recipe to a Pillsbury contest, and she won a $1 million prize. In the full clip, Oprah explains that the recipe was for "chicken and spinach stuffing."

If you watch the full clip, you'll see that the most surprising thing isn't even the chicken's lack of seasoning. It's that the recipe also features Pillsbury's "Dunkables Waffle Sticks." The frozen waffle sticks, which come with a dipping cup of maple syrup, aren't exactly the first thing that comes to mind when you think of chicken recipes — but then again, that innovation might have been what won Ginsberg the prize.

The waffle sticks weren't totally out of nowhere, though — Ginsberg explained that contestants had to use two Green Giant or Pillsbury products in their recipes, and she chose frozen spinach and the waffle sticks. Still, Oprah couldn't hide her surprise that the frozen treat was a part of the recipe.

And while the chicken may have been lacking in dry seasonings, Ginsberg did create an inventive glaze for it. She mixed the waffle sticks' syrup packets with Worcestershire sauce and peach preserves before coating two chicken breasts in it. (The frozen waffle sticks themselves, meanwhile, are used in her spinach stuffing mix, which she prepared while the chicken breasts were baking. And the stuffing mix did include several seasonings, including poultry seasoning and sage.)

It's also worth noting that Ginsberg did say she added a bit of salt and pepper to the raw chicken breasts before coating them with the glaze, and you can see the pepper flecks on the chicken at the 1:50 mark in the above video. Confusingly, though, she later says at the 6:00 mark that "there's no salt and pepper" in the recipe.

Either way, if the viral clip has taught home chefs anything, it's that you really can't go wrong with adding more seasoning. Oprah evidently thought there should have been more salt and pepper added to the chicken, at least in its final stages.

As for his part, Althouse told BuzzFeed's Krystie Lee Yandoli that he was "ecstatic that Oprah responded" to his tweet. "It's good to know she enjoys her chicken seasoned, as people should," he joked. If this story proves anything, it's that if you tweet something about a celebrity, they really might see it and respond to it. And hopefully, Oprah has enjoyed plenty of seasoned chicken in the 12 years since this video was filmed.

More like this
Twitter Is Identifying With Sally Field & Jane Fonda’s Friendship In New Viral Video
By Jake Viswanath
4 Surprising Celeb Throuples That Got The Internet Talking
By Sophie McEvoy
Twitter Is In Awe Of Taylor Swift’s “Lavender Haze” Music Video
By Jake Viswanath
Madonna Already Added 14 Dates Her Greatest Hits Tour Due To High Demand For Tickets
By Jake Viswanath
Get Even More From Bustle — Sign Up For The Newsletter
From hair trends to relationship advice, our daily newsletter has everything you need to sound like a person who’s on TikTok, even if you aren’t.