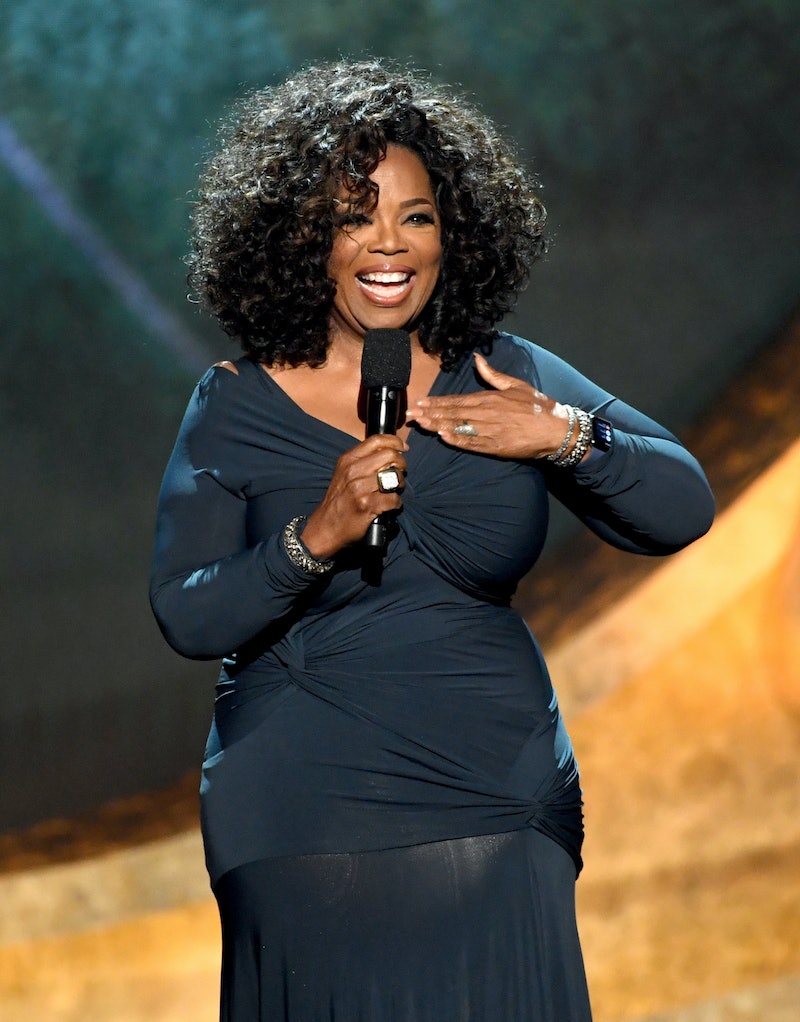 While conversations around aging in Hollywood are becoming more prevalent, a woman in entertainment who truly celebrates age is perhaps still a rarity. Leave it to Oprah to make women get excited about growing older. In a new interview, Oprah says she doesn't believe in retirement, and her stance is one that proves age is not only a gift, but something to look forward to.

On Jan. 29, the media mogul turned 65, which is commonly referred to as the standard retirement age. Not for this history-making entrepreneur, though. In an interview with Entertainment Tonight, Oprah addressed retirement, saying, "I don't believe in it." While acknowledging her age is a "milestone," Oprah won't buy into the societal norm of retiring at 65.

She explained that, upon her birthday, her close friend Gayle King asked her, "Are you feeling some kind of way?" to which Oprah responded, "Yeah, actually, I am feeling some kind of way because it's the number of which the United States government has said you're officially old." She even joked about friends asking, "Did you get your Medicare card?"

Even strangers are speaking up. Oprah recalled recently being at a bookstore when someone said, "I see you're now here and 'cause you're retired... You're doing a lot of reading on your retirement." She explained, "I started to turn around and give a whole lecture. 'I'm not retired.' But I thought, 'OK, just take it.'"

Jokes aside, though, Oprah's stance on retirement is an eye-opener about how precious life is and why aging shouldn't have such negative connotations. "I always think about the people who didn't make it," she explained in the interview about those who've passed away too soon. "I've been thinking about it since my 40's. I remember when Princess Diana died and I thought, 'Oh my god, she's never gonna make it to 50'... For every single birthday that I get to experience, I think it's a gift and a blessing."

Walking the walk, Oprah's wasted no time in creating a legacy for herself. The fact that she works hard to continue that legacy is inspiring, especially after being at it for over 40 years. According to her IMDb, Oprah got her start as a talk show host on the morning show People Are Talking in 1978. In 1981, she was offered a job at a show A.M. Chicago which was changed to The Oprah Winfrey Show a few years later. Her show famously ran from 1986 to 2011 and has led to a media empire. In 2000, O: The Oprah Magazine was launched, followed by the OWN Network in 2011. Last year, Forbes reported that Oprah's worth over $2.5 billion and she was No. 6 on Forbes' 2018 list of America's richest self-made women.

In addition to riches, Oprah's gained something else with age: perspective. "When I was 25 I thought I had to say yes to everything anybody asked me to," she told ET. "The wonderful thing about being 65 is you do exactly what you want to do." With an attitude like that, she'll keep making history regardless of her age.