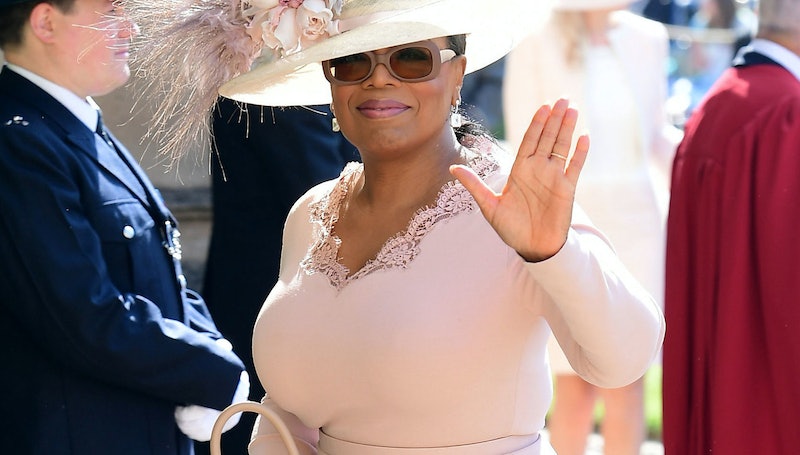 Gayle King knows all — including what designer Oprah Winfrey wore to the 2018 royal wedding. The CBS correspondent revealed during the network's pre-coverage that the talk show host and American pop culture icon was indeed wearing a Stella McCartney design. Winfrey, who was somewhat of a surprise guest at the nuptials of Prince Harry and Meghan Markle, dazzled in a soft pink dress by McCartney. While the dress was so lovely, you need to see the hat with which she accessorized. It (and she) slayed!

Since King and Winfrey are longtime BFFs, she divulged that Winfrey dealt with a bit of a wardrobe malfunction ahead of the ceremony. It had nothing to do with torn seams or missing buttons, though.

Instead, she scrapped her previously selected outfit because it was too close to the color white. Since the bride (presumably) would be wearing white, the former doyenne of daytime TV didn't want to wear something too similar.

So it was McCartney, who is an English designer, to the rescue.

There were rumors that the house would get the call to create Markle's wedding dress. However, that guess has since fallen down the rung of possibilities.

Have a look at Winfrey's dress and that hat below.

It was a wholly appropriate ensemble and indeed very English. The blush frock hit past the knee and had long sleeves. Overall, the color was gorgeous as it popped against Winfrey's skin tone and paired perfectly with her floral hat. That hat, though. It boasted a big brim and featured feathers and pink flower that matched her dress.

Epic is pretty much the only world that aptly applies to Winfrey's hat. It was quite an ornate presentation. Like everything else in life, Winfrey crushed it.

The dress had a tiered bottom, which made it feel dressier. The delicate and lacy scalloping at the bottom was also an elegant touch. The neckline featured the same design, adding both consistency and balance to the design.

She accessorized with a pair of sunglasses, strappy heels, and a small bag. It was a well-coordinated fashion move from top to toe. She also rolled deep with actor Idris Elba.

Can we just take a moment to note how Winfrey is all of us at an event with assigned seating? She entered St. George's Chapel at Windsor Castle and proceeded to search for the folding chair reserved specifically for her. Who hasn't done this when attending a wedding? Don't deny it — you know you have.

While Winfrey is best known and revered for both her humanitarian and public work, her 2018 royal wedding outfit reminded us how glamorous she can be. With her invite in hand, you can see her neutral manicure, as well.

Winfrey's presence at the Royal Wedding made much of Twitter very happy. This user was glad to see her on the grounds.

This user was unlike most of the world today and didn't plan to watch the nuptials. But the guest list has caused her to change her mind.

Oprah has this sort of effect on so many people. While some tweets are loaded with snark and questioning why the celeb guests are such a big deal, there are plenty of royal wedding watchers who are over the moon about the attendees and their attire.

The royal wedding is a posh shindig. But somehow, Oprah Winfrey helped bring it back down to earth for the rest of the world and regular people.

Oprah came. She saw. She wore pink Stella McCartney. She crushed it. Carry on.