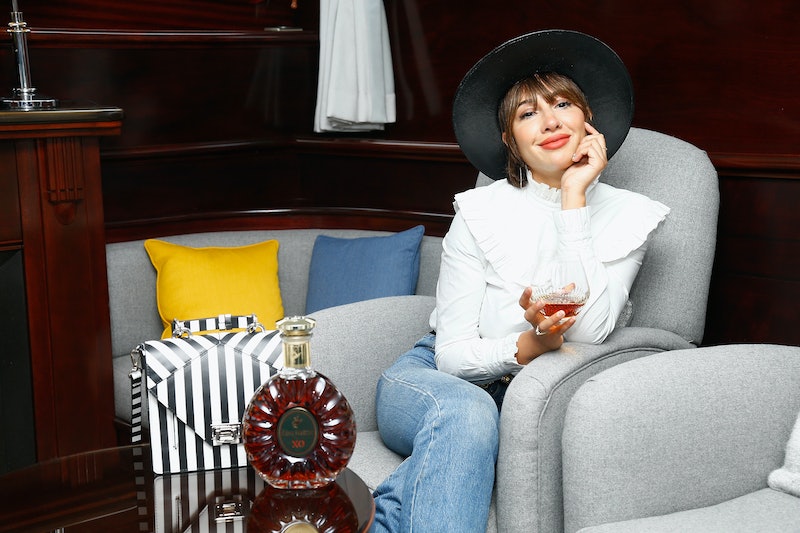 When Jackie Cruz shows up at our Bustle studio, she greets every staff member with a big hug. We’ve been trying to find a date to get together for months, which is challenging when you’re as busy as Jackie Cruz. Orange Is the New Black is entering its sixth season, she’s recording her first album, and she is using her mega social platform to advocate on behalf of issues like immigration and prison reform. But now she’s here, and she’s ready to talk.

This isn’t the same Jackie Cruz I interviewed two years earlier. This Jackie Cruz is bolder, stronger, and ready to chat about all the ways she’s grown. Her hair is cut short, she’s wearing big wire-frame glasses, a golden feather crown, acid wash jeans, a Sergeant Pepper’s lonely heart blazer, and a fanny pack. In conversation, she explains that her look is actually the result of a lot of self-reflection: coming to terms with the fact that the way the world sees her is not the way she sees herself. She’s creating her own projects instead of waiting for others to give her permission. She’s raising her voice in support of causes without fear of retaliation.

Jackie has hustled hard to get to this moment. During the first two seasons of OITNB, Jackie made ends meet by working as a bottle waitress at 1 Oak, often working back-to-back shifts.

“I would actually go to work with my waitressing outfit after, because it was 6 a.m.,” Jackie recounts of the nightlife era, laughing. “Then Kate Mulgrew was like, ‘Where did you come from?’ 'Cause I'm wearing fishnet stockings, holes in them. My eyes are bleeding black. Then I'm like, "I came from the club."

Reflecting on this time, Jackie tells Bustle that while acting pays the bills now, the lifestyle is not always as glamorous as it might seem. “People need to know that some of us are like Cinderella. We return the dress at midnight.”

OITNB took off and Jackie’s star rose with it. But even with Jackie’s success, she’s continued to run up against the challenges of being Latina in Hollywood.

“I'm Latina, but I'm also all different types of things,” Cruz tells me in the bright orange recording room. “I'm writing my own film, because you know what? I've been auditioning. I've been this close to getting it. And I don't get it, because of the way I look. Because I don't look Mexican. I don't look Dominican. I don't look Puerto Rican.”

“Artists Are The Gatekeepers Of Truth”

If you follow Cruz on social media, you know how she feels about prison reform, immigration, and LGBTQ rights. She used to be worried, she tells me, about all the nasty comments that would follow her opinions. Now, the trolls don’t matter. “Since I have a platform, I put my messages out there, bring awareness to the things that I believe are true and need to be changed. If you don’t like it, you can unfollow me. I don't care anymore,” Cruz says defiantly. “The president was a reality star. Why is his opinion more important than mine?”

“The president was a reality star. Why is his opinion more important than mine?”

But how does someone make that shift from self-protection to self-assurance? Cruz says her mentor, activist Carmen Perez, was instrumental in unlocking her zeal for social causes. “She trained me to not care anymore and just fight for what you believe in,” she tells me.

The connection between Perez and Cruz — two Latinas, in different professional spaces, forming a friendship and alliance based on shared values and shared experiences reminds me why these conversations matter: By having someone else see us as we are, in our full potential, we become empowered to do more and to be more.

Jackie’s journey reminds me of my own: learning to tune out the naysayers and keep saying “yes” when everyone else keeps telling you “no.” As women and Latinas, we constantly navigate others’ expectations of who we’re supposed to be, and how we’re supposed to act. We’re told that we’re “too Latina”, “not Latina enough,” or "the wrong type of Latina." Those shared experiences — from corporate America to the halls of Congress — and the conversations we have about those experiences is the reason I wanted to create my new podcast, Latina to Latina. I wanted to know more about how successful Latinas like Jackie tackle these questions, and to remind anyone who is struggling to be who they really are — versus who they are expected to be — that they are not alone.

When Cruz and I wrap our interview, we find ourselves lingering. Somehow, there is always more to say. She plays me rough tracks from her album (it’s really good). Teaches me how to take a not-terrible selfie. Tells me about the next music video she’s shooting. She puts back on her winter finery and gets ready to ride the subway home. After all, she’s got things to do.

Latina to Latina is a new Bustle podcast where Alicia Menendez talks to remarkable Latinas about making it, faking it, and everything in between. Starting April 10, every Tuesday there will be a new episode of Latina to Latina that will center on the challenges of existing, and then thriving, as women of color. Listen to the full interview with Jackie Cruz right here.

Subscribe on iTunes, share with your friends, and please reach out — we want to know what you love about Latina to Latina, who you'd like to hear from next, and how you feel about the issues we’ve covered. You can email us at latinatolatina@bustle.com.

You can read the full transcript of the episode here.

More like this
Kim K Is Putting Kanye’s Memorabilia — Like Grammys & Clothes — In A Vault
By Jake Viswanath
The 'X Factor' Releases Unseen Footage Of Kelly Rowland Forming Little Mix
By Jake Viswanath
Twitter Can’t Get Enough Of The Romance In 'Ekin-Su & Davide: Homecomings'
By Sophie McEvoy
Meghan Markle Just Addressed *Those* Wild 'Real Housewives' Rumours
By Sophie McEvoy
Get Even More From Bustle — Sign Up For The Newsletter