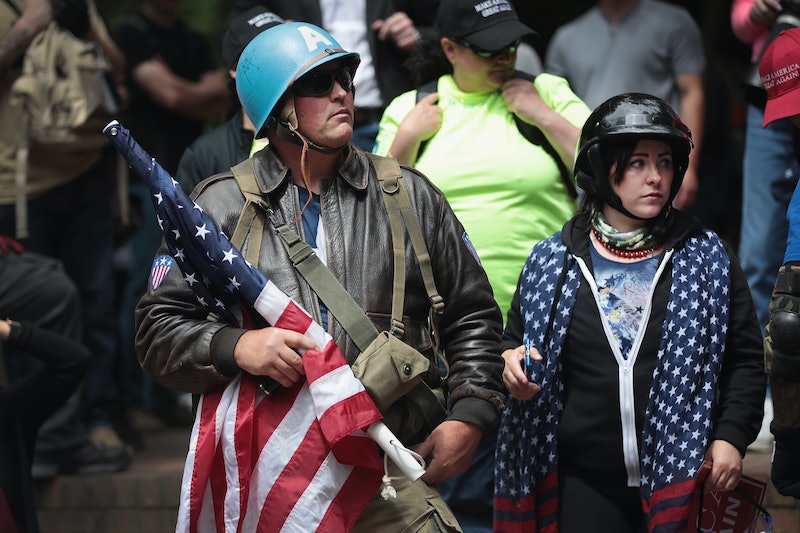 When Oregon Republicans fled the state last week in an effort to block a vote on cap-and-trade legislation designed to lower greenhouse gas emissions, it seemed as if the plot of some political comedy had come to life. But with GOP lawmakers going into hiding from state police dispatched by Oregon's Democratic governor to haul them back to work, the situation has continued to escalate. On Saturday, Oregon's State Capitol was shutdown amid Republicans' vote refusal after police received threats from militia groups supporting the legislators' walk out.

"The State Police Superintendent just informed the Senate president of a credible threat from militia groups coming to the Capitol tomorrow," The Wall Street Journal reported a text sent to Oregon's state senators read. "The Superintendent strongly recommends that no one come to the Capitol."

In an email to Reuters, a spokesperson for the state police declined to elaborate on the nature of the threats that had led to Oregon's State Capitol being shutdown. Rather they said the department had been "monitoring information throughout the day that indicates the safety of legislators, staff and citizen visitors could be compromised if certain threatened behaviors were realized," the news outlet reported.

In a tweet posted Saturday, the official Twitter account of the Oregon Republican Party posted a photo they implied was "heavily armed militia" laying "siege to Oregon's Capitol as Senate Democrats cower in fear." But Rolling Stone's Tim Dickinson was among the first to point out that the photo Oregon's GOP had used wasn't actually from Saturday, nor did it appear to even be of a "heavily armed militia." According to Dickinson, the photo was from a peaceful June 19 protest against the cap-and-trade legislation that had been comprised largely of truckers.

As it turns out, Saturday's protest at the state Capitol was rather uneventful (except for the horse that was walked up the Capitol steps but refused to walk down, of course). According to KGW reporter Devon Haskins, the large rally planned for Saturday was pushed to Sunday following reports the state Senate's Saturday session had been canceled.

Meanwhile, state police are continuing to search for the Republican senators, many of whom are believed to have fled the state, according to KGW8. And according to The Oregonian, the walkout is costing the GOP personally. Each lawmakers is being fined $500 from their per diem and salary for every day of work they miss, the paper reported.

In an effort to cover the fines Republican state legislators are incurring as a result of the walkout, one supporter launched a GoFundMe campaign. As of late Sunday morning, the "Encourage the Walking Senators" fundraiser had raised more than $39,000, although it doesn't appear as though the senators will actually be able to accept any of the money.

In a phone interview with local ABC affiliate KATU, state Senate Minority Leader Herman Baertschiger Jr. said state ethics laws required all political donations be tracked through a campaign finance accounting system overseen by the secretary of state. As a result, the lawmakers were prevented from accepting or using any of the money raised via the GoFundMe. A City Council member from Medford, Oregon, also said he'd reported the GoFundMe campaign as "being illegal under" state law.

All 11 of Oregon's Republican state senators have been on the lam, so to speak, since Thursday, and it's unclear when they plan to return to work. "I don't think you're going to see us anytime soon," Baertschiger told KATU Saturday evening.