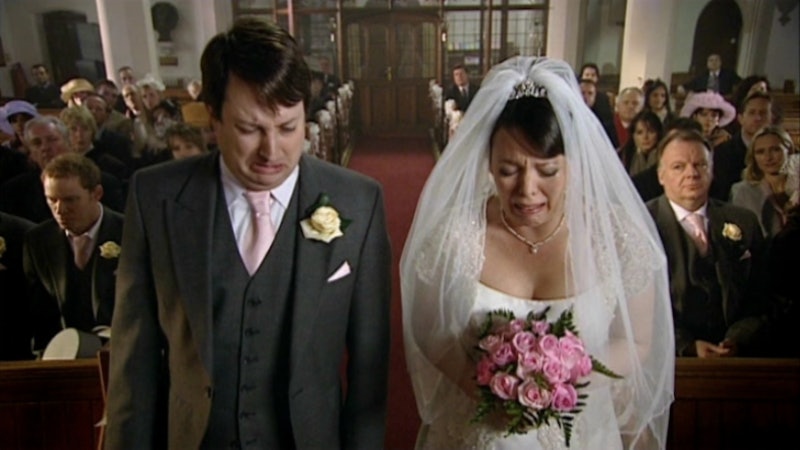 When Olivia Colman won the Academy Award for Best Actress on Sunday night, I cried. There were plenty of reasons to: she’s a first-time Academy Award nominee, she’s amazing in The Favourite, and, before the film, she was relatively unknown in the U.S. But what hit me is that I was seeing the star of one of my all-time favorite shows win an Oscar. Before becoming a contender, Olivia Colman was best known to me as Sophie from Peep Show (streaming on Amazon Prime and Hulu), a complex, flawed character that allowed the actor to show the full potential of her acting chops early in her career.

When she was 19, a fateful moment got Colman her start. As a Cambridge student, Colman auditioned for the Footlights Dramatics Club, which was vetted by Peep Show stars David Mitchell and Robert Webb. “I remember I ate a cigarette butt in the audition, which surprised them a bit,” said Colman in an interview with The Telegraph. She made a lasting bond with the comedic pair, making her first TV appearance on their BBC Two sketch show Bruiser in 2000. The show only lasted for one season with six episodes, but this marked the beginning of her career onscreen. After another short-lived sketch show called The Mitchell and Webb Situation (the predecessor to That Mitchell and Webb Look), Colman was invited to be part of their brand-new series, Peep Show, in 2003. The sitcom is about two highly dysfunctional friends, Mark (Mitchell) and Jeremy (Webb), who live together and often find themselves in awkward, uncomfortable situations.

What turned Colman into a TV star though was her ability to explore her character’s maximum potential. When Sophie’s introduced in the first season, she seemed innocuous enough. She's Mark's work crush, who he desperately tries to win over as she begins to fall for Mark’s work nemesis, Jeff (Neil Fitzmaurice). But Sophie transforms throughout the show’s nine seasons, turning into a character who's just as complex as the dramatic ones she's since played. And that’s in part thanks to Colman herself, who suggested to the writers that Sophie's dark side should be explored, per her interview with British Comedy Guide.

“She started off so sweet and nice — but I always felt she wasn't that nice, because she knew that Mark fancied her, and yet she was going to him whenever something didn't work out with Jeff or whoever,” recalled the actor. “And I think that's the mark of someone who's not that nice. Someone nice wouldn't play with another person's emotions like that. I mentioned that to Sam and Jesse, and I think they quite liked the idea of her being like that, and she's progressed into something quite horrible, which I really enjoyed playing. The best roles are always the ones with a bit of edge to them.”

Sophie evolves in such an interesting way because of how that exploration of her flawed persona was handled. She could’ve easily been relegated to the romantic interest, but by the end, she becomes so much more than that, causing chaos in the protagonists' lives. Sophie’s vulnerabilities are examined throughout the show, the humor coming up against dark, desolate moments that show how her life begins to crumble. Watching her progression, it makes sense that Colman would end up tackling dramatic roles.

It was actually during the Peep Show hiatus between 2010 and 2012 that Colman started branching out and giving dramas a try, starring in the 2011 film Tyrannosaur and having a small role in The Iron Lady. "[Being cast in Tyrannosaur] changed everything, really," she said in an interview with The Independent. "It's funny… I've always done bits of drama, but clearly nothing anyone had ever seen." Prior to Tyrannousaur, she had small dramatic roles in TV shows like Skins and Doctor Who. But in 2012, being cast in Broadchurch marked the transition from comedian to dramatic actor, causing her to skip out on being on the eighth season of Peep Show.

"I couldn't do the latest series because I was doing Broadchurch," Colman told The Independent. "But also from a story point of view I don't think Sophie was as interesting for people to watch any more. And Dobby (Isy Suttie) is such a brilliant character and it's more fun to watch Mark f*ck it up with other people."

But despite Colman believing that there wasn't much left to show of Sophie, she returned to the show's final season in 2015 and gave the character a proper sendoff, which became one of the series' most memorable scenes.

Colman’s Academy Award-winning role in The Favourite allowed her to show off her dramatic and comedic acting chops in a role that seemed tailor-made for her. But I also want to celebrate her beginnings, and how a cult hit turned her into the Hollywood star she is today.