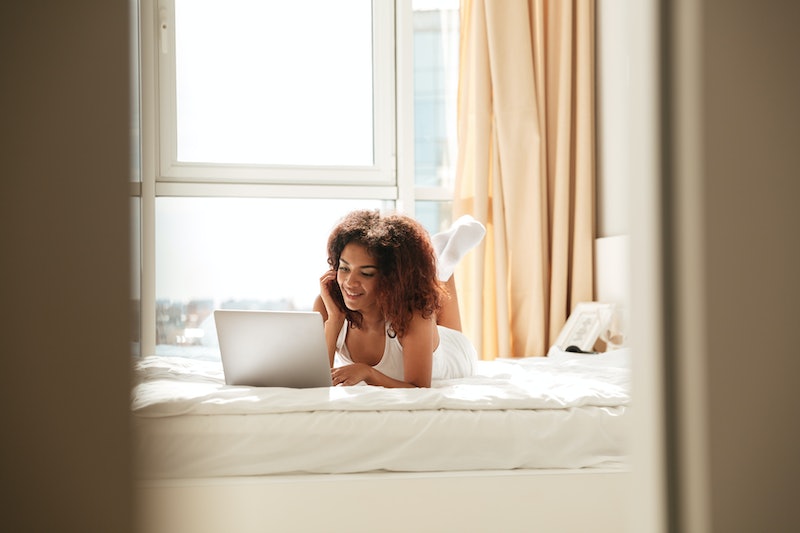 A new sex ed platform called O.school is launching November 3 and it promises a "radical," "groundbreaking," "troll-free sex ed oasis on the internet" to "revolutionize" the ways we talk about sex, pleasure, consent, and trauma. It also boasts a queer woman of color as a founder who promises to center women, LGBTQ+ folks, and people of color with a diverse team for a truly intersectional experience. And key to its premise is an interactive platform where members can engage with educators and each other like never before. But, like any new platform, O.school can't be all things to all people right off the bat. Doing community outreach and scaling a startup have never been friendly bedfellows and, while O.school has admirable goals, it still has room for improvement in the highest-need areas of LGBTQ+ sex ed.

"I just got back from a college tour and it’s stunning what people don’t know — not just about consent, but basic physiology."

While the former provides great clinical advice and medical services, and the latter tackles pleasure from an entertainment standpoint, Barrica found pleasure- and consent-based, trauma-informed sex ed lacking, both in schools and on the internet. "I just got back from a college tour and it’s stunning what people don’t know — not just about consent, but basic physiology," she tells Bustle.

One of O.school's most novel approaches is its focus on shame and trauma as a part of holistic sex ed. Part of the challenge, as Barrica sees it, is not just filling gaps in knowledge, but also in "unlearning" the kind of shame-based, sex-negative sex ed that's frequently taught in places like abstinence-only programs. Many people don't even realize they've sustained sexual trauma until they encounter pleasure- and consent-based sex education for the first time. And for Barrica, making space for that trauma in the classroom is a part of the educational process.

The "classroom," in this case, is virtual, and it's staffed with darlings of the sex educator landscape: Dalychia Saah and Rafaella Fiallo teach a course from their Afrosexology workshop, Latishia James aka Reverend Pleasure tackles the intersection of sex, religion, and trauma, and queer porn performer and columnist Andre Shakti will be teaching a class geared toward straight, cisgender men on dismantling toxic masculinity. The idea is that these educators, who are typically relegated to college speaking tours and seminars in thrivingly diverse and sex-positive cities, will be able to reach much larger audiences through O.school's live streams. The platform will host a variety of live-streamed seminars every day, while viewers can tune in and use its chat platform to ask questions of the instructors and interact with fellow students in real time. As far as democratizing the sex education enjoyed in metropolitan cities, it's a great idea.

When O.school first began generating buzz earlier this year, one of its popular selling points was that it would be an invite-only platform. This would keep its vulnerable students safe from internet trolls seeking to further traumatize them. However, now that the site is poised for a hard launch, the platform is open to the public, which feels a little like a betrayal of the vulnerable people it initially sought to protect, even if it makes business sense.

"O.school’s model has to be sustainable for this to work," Barrica says. "We will introduce members-only premium spaces in the future, but right now we are launching publicly to create access and to experiment with business models that will help us reach more people. I feel so passionately about sex and pleasure education, and there are so many people, not just in the U.S. but across the world, who feel sexual shame, who lack access to information about their bodies. Those are the people I most want to reach. I’d love for us to reach a billion people."

The other problem with aiming for traffic is that, by definition, marginalized people are going to remain marginalized in favor of reaching a majority. Obviously, How Late Capitalism Fails Queers, Women, And People Of Color isn't O.school's problem to solve. But it's disheartening that even a platform with a Silicon Valley-experienced queer women of color at the helm couldn't break free of it.

One influence Barrica mentions a lot in her interviews is Scarleteen, the comprehensive, inclusive, supportive sex ed resource for teens that's been rattling around the internet (and in millennials' hearts) since 1998. Today, it boasts articles like "A First Polyamory Guide," "Disabled Sex Yes!" and "I Feel Good: Pleasure and Fulfillment." Given the founder of O.school's affinity for the most groundbreaking sex ed resource on the internet for teens, I wondered if there were going to be parts of the platform aimed at or equipped to teach curiously googling children. What legal barriers would the team have to navigate in order to include them? What's the frontier of child-led sex ed? Barrica seemed content to satisfy the simple legal obligation of disclosing that the site was 18+.

"There are hundreds of millions of adults who never had great sex education, and we think it’s important to focus on them."

"There are hundreds of millions of adults who never had great sex education, and we think it’s important to focus on them," she says. "And frankly, they will pass on their attitudes about sex to the next generation of youth, and I can’t think of a better gift to the next generation of youth than parents who have addressed their own issues around shame and sexuality...At O.school we will have content that teens (18-19) will find helpful, but there are different challenges in trying to address those below the age of consent. The frontier for child-led sex ed is important and will be a combination of wide scale culture change. We’d love to be part of it, but it’s part of broader cultural effort."

I thought about other high-need areas of sex ed in my own community. The question I see go unanswered most often in queer sex spaces center around sex work. Someone will be desperate for more information, from how to get started and where to find a support network, to common problems that arise and a general need to pick an experienced sex worker's brain. Inevitably, a sex worker will shut the person down, rightfully pointing out that "this isn't the space" to demand emotional labor from sex workers and get a free education. That's fair, but where is the space? Often, it's in secret groups which newcomers have trouble finding. The hunger for mentorship in this profession is gnawing, but O.school hasn't found a way to satiate it. They aren't planning any lectures on sex work, nor do they have plans to tackle the topic of how to be a good sex work client, which is also a subject lacking in resources.

A Fast Company profile from last July teased that O.school would offer classes on "how medical professionals can practice trauma-informed care," which is a huge issue facing transgender patients. But when I asked Barrica about this class, it didn't seem to exist. "For launch, we’re really focusing on broader topics — issues like orgasms, and STIs, and consent," she says. "But as we grow, we’ll be able to better narrowcast."

The problem is that orgasms, STIs and consent aren't necessarily the most pressing issues in the at-risk communities for which O.school purports to be advocating. "I think that too often we’re content in our own progressive bubbles — if you’re in San Francisco or New York or LA, you have access to so many resources," Barrica says. "That’s not always the case if you’re living in a rural area, or an intensely religious community, or in a political environment where Planned Parenthood is seen as the enemy. I want to reach those people."

I pointed out how that sounds suspiciously like O.school is putting the needs of straight, white, cisgender Middle American women first, just because they're in the majority. Why should queer people of color trust that the platform will be in their corner when, at its outset, it's going to be overlooking them in order to cater to the same people who are always catered to?

"I’m a queer woman of color so the last thing I want to do is reify the existing power structures that marginalize us," Barrica says. "I also think that when we talk about people living in rural areas, or religious communities, or conservative communities, we’re directly thinking about communities of color. Because the media strips everything into reductive binaries, there’s a tendency to read 'rural' or 'religious' or 'conservative' as white. It’s not. I am a Filipinx woman who grew up in those communities, and so I’m hoping to reach the people I grew up with."

It's a fair point and watching the platform's launch announcement live stream on October 25, the demographics of its team came into view. Two people on the O.school team shared how they were raised in strict, non-white Christian cultures: Filipino Catholic in the case of Barrica and Jamaican Pentecostal Christian in the case of Latishia James, the Pleasure Reverend. Of course, coming from these perspectives, consent, pleasure, and STIs are high-need areas of sex education for women, queer folks, and people of color.

But there are many queer folks whose trauma doesn't reside there, not only because they weren't necessarily raised in those cultures, but because those cultures aren't necessarily the root of people's traumas. It's entirely possible to go through a strict religious upbringing while aware enough of your own sexuality to dismiss its harmful messages.

"Right now, we're a small team, fighting an uphill battle to get a progressive platform like this even launched, and so we're wary of over-promising and saying that we can address the needs of everyone at once," Barrica says. "There’s a ton of work to be done, and sometimes it can seem overwhelming. I think that culturally, because the need is so great, and so urgent, that there’s a disproportionate burden placed on anyone doing this work at all. We understand the expectation, but I think it’s a form of self-care to say: this is what we can do now, and still preserve our integrity and sanity so that we can grow to fight larger battles."

Listening to O.school's educators speak in the launch announcement preview, it's tough not to buy into the idea. The folks features are overwhelming favorites in the sex educator community and well-versed in speaking about sex ethically, inclusively, and accessibly.

In one class on the bastardization of the term "sex-positive" and what it really means, an educator who works at Good Vibrations named Andy Duran points out that being sex-positive doesn't mean not having boundaries. I instantly recall being 19 years old at the Colosseum and ambushed by two costumed guards who simulate sex with me for audience laughs while I'm lounging with my friends. Duran's point reminds me of how frustrating it's been in my own life to feel like I have to laugh off sexual harassment because I'm "the token radically sex-positive person" and I don't want to trigger anyone's shame around sex and desire.

To that end, Barrica says, "I would say we are making emotional labor more sustainable and scalable for our Pleasure Professionals to offer."

More like this
Experts Say These 23 Things Won't Happen In A Strong Relationship
By Carolyn Steber
15 Flirty "Thinking Of You" Texts That’ll Make Your Crush’s Day
By Lexi Inks
The Case For A Hard Launch Summer
By Morgan Sullivan
Are Gemini & Scorpio Compatible In A Relationship?
By Kristine Fellizar
Get Even More From Bustle — Sign Up For The Newsletter