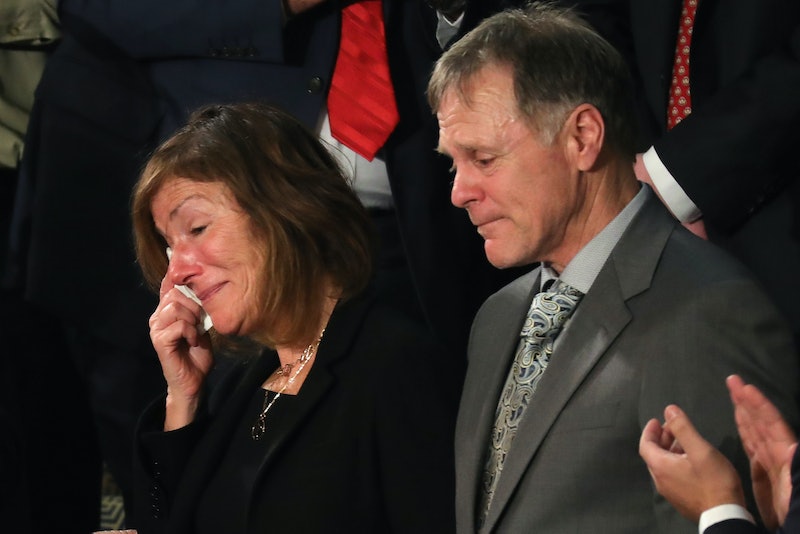 After talks with Kim Jong Un collapsed, President Donald Trump shocked the United States when he said he believed the North Korean leader was not responsible for the death of Otto Warmbier, an American college student who suffered severe brain injuries and later died after being imprisoned in North Korea. Now, Warmbier's parents have issued a sharp rebuke of Trump, asserting it was Kim "and his evil regime" who were behind their son's death.

"We have been respectful during this summit process. Now we must speak out," the Warmbier family said in a statement released Friday (via NBC News). "Kim and his evil regime are responsible for the death of our son Otto... No excuses or lavish praise can change that." The Warmbier family also accused the North Korean leader of being "responsible for unimaginable cruelty and inhumanity."

On Thursday, Trump told reporters that he did not hold Kim responsible for Warmbier's death while speaking at a news conference in Hanoi, Vietnam, after talks regarding the denuclearization of the Korean peninsula had collapsed without a deal. "I don't believe he knew about it," Trump said of the North Korean dictator. "He tells me that he didn't know about it, and I will take him at his word."

The president has since become the target of serious bipartisan criticism, as congress members from both sides of the aisle question Trump's willingness to let North Korea off the hook.

"We can never forget about Otto. His treatment at the hands of his captors was unforgivable and it tells us a lot about the nature of the regime," Republican Sen. Rob Portman, who represents the Warmbier family's home state of Ohio, said in a speech on the Senate floor. "We can't be naive about what they did to Otto, about the brutal nature of the regime that would do this to an American citizen."

Former U.S. Ambassador to the UN Nikki Haley refrained from mentioning the president by name Thursday when she tweeted that "Americans know the cruelty that was placed on Otto Warmbier by the North Korean regime," adding "our hearts are with the Warmbier family for their strength and courage."

Warmbier was on a guided tour of North Korea in January 2016 when he was arrested on charges of subversion and committing a "hostile act" against the state for allegedly attempting to steal a propaganda poster from the Yanggakdo International Hotel in Pyongyang. The college student was later convicted and sentenced to 15 years of hard labor in March 2016. Warmbier was, however, released and returned to the United States 17 months after his sentencing.

At the time of his return, Warmbier was in a comatose state and died less than a week later. While North Korea has denied responsibility for Warmbier's death, claiming he came down with botulism, U.S. doctors found no evidence of the disease, The New York Times reported. In a lawsuit filed against North Korea by the Warmbier family in 2018, they alleged their son's medical condition and eventual death were the result of his having been tortured.

Trump's comments on Thursday were somewhat of a dramatic departure from remarks he'd made in 2017, when he condemned North Korea's "brutal regime" for Warmbier's death.