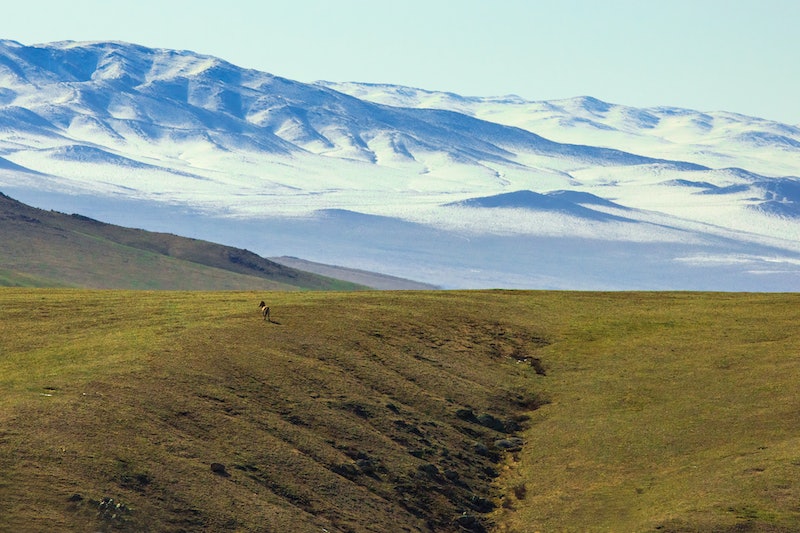 Your favorite nature doc narrator is officially back. Come April 5, Netflix will release Our Planet, a docuseries narrated by none other than David Attenborough. It was created by the same team behind the critically-acclaimed BBC series Planet Earth, also narrated by Attenborough, and will examine how climate change has impacted plants and animals across the globe. And while Netflix hasn't yet announced if Our Planet will return for Season 2, it doesn't sound like those who worked on the series are going to stop fighting for our planet any time soon.

Alistair Fothergill served as a producer on both Planet Earth, which came out in 2006, and Our Planet. Talking to The Atlantic, he explained that Netflix allowed him and the team to be more direct in discussing climate change than they were on the BBC. That's not to say they didn't mention climate change on the BBC — they did. Fothergill just feels they didn't mention it enough.

"There has been a habit of having a 45-minute show where we say that everything's fine, and in the last five minutes, we say there's a problem," he said. "I think that's a little bit trite. It doesn't deal with the issue."

Attenborough has a slightly different take on the matter, feeling that approaching conservationism too aggressively too early could turn viewers off too early, without being able to get their message across. In an interview with Der Spiegel, he explained that he believed he was as progressive as he could have been throughout his career, and has become more so as time went on. He explained:

"[I]t is perfectly true that in the 1950s and the 1960s, I didn't talk about conservation, but then nobody did. We weren't aware of it. On every one of the big series that I did, from about 1980 onwards, always at the end, there was a piece about conservation. But before people are concerned about something, you have to persuade them to love it. If you start your program by saying: 'I'm now going to tell you about doom and gloom and then all the catastrophes that you silly people have started,' you aren't going to get anywhere. I've just finished seven films for Netflix entirely about conservation. And that's been going on for several years, so my conscience is OK."

Now, even BBC is more eager tread into touchier territory when it comes to climate change, as they've announced an upcoming documentary, also in conjunction with Attenborough, called Climate Change: The Facts. The film is set for release this spring, per Der Spiegel.

So while Our Planet aims to address the primary concern with Attenborough's earlier documentaries — that they underplayed the negative impact humans are having on the planet — that doesn't mean he hasn't played an important role in paving the way for that kind of discussion. Hopefully, Our Planet will do the same for even more important conversations about conservation in the future — in fact, based on all these upcoming projects, it sounds like it already has.

More like this
Here’s Everything Coming To & Leaving Netflix In October
By Jake Viswanath
What’s New On Netflix: Meet 'The Real Bling Ring'
By Arya Roshanian
What’s New On Netflix: Camila Mendes & Maya Hawke 'Do Revenge'
By Arya Roshanian
Nicola Coughlan Shared A Lady Whistledown Excerpt From ‘Bridgerton’ Season 3
By Grace Wehniainen, Alyssa Lapid and Sam Ramsden
Get Even More From Bustle — Sign Up For The Newsletter