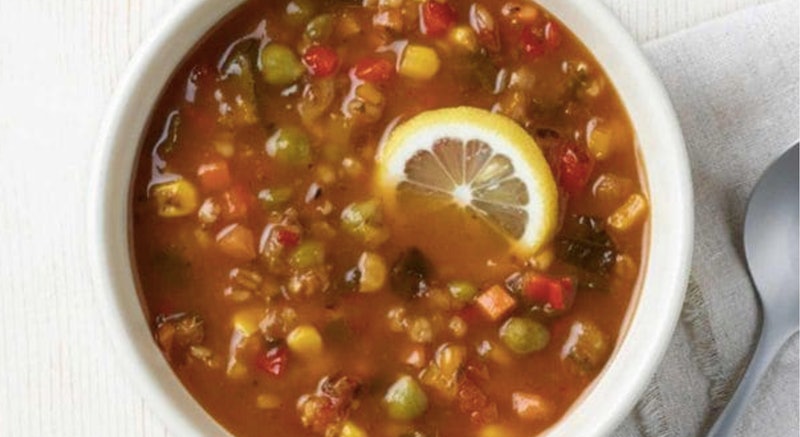 A bowl of soup is the hottest accessory for winter. And now there's great news for vegans looking for friendly options on their lunch break. Panera Bread added a vegan soup to their menu and it's here to stay. Prior to this vegan inclusion, Panera Bread's vegetarian soups included milk, which puts a vegan with a soup craving at a stand still. Consider that pesky problem solved with the first soup, Panera has introduced to their menu in three years.

And speaking of bowls, the soup is available in a cup, bowl or the ever-popular, ever-innovative bread bowl. Even if you aren't vegan, this soup is a solid mid-winter option. Bacon is good, but vegetables can still get it. Plus, besides being a warm interpretation of a vegetable garden, the soup's flavors of tomato, peppers and corn are reminders of summer. Each spoonful makes the winter go down.

Though the soup contains no dairy or meat, there are still some allergens to look out for. Because of the red fife, the soup does contain wheat. It also contains soy. If you don't have issues with either of those, though, you're raring to go.

In the meantime, Twitter is all about this addition. One Twitter user boasts, "ten vegetable soup at panera i owe my life to you." Another Twitter user writes, "I had the new Ten Vegetable soup yesterday - it's fantastic! Can't wait to get it again." Panera Bread's official Twitter account is also taking to social media to comment on the latest menu addition. Panera's Twitter is coming in ~hot~ with the soup puns, responding to excited Panera enthusiasts that the Ten Vegetable option is, indeed, souper.

The vegan Ten Vegetable Soup is available now at all Panera Bread locations. And because it's here to stay, you can enjoy this vegetable packed soup year round whenever the mood for soup strikes. Enjoy it alongside the also vegan Seasonal Greens Salad for a fuller meal thanks to Panera's You Pick Two option.

While this vegan option is a game changer, the restaurant reminds diners of the reality of their kitchens. The disclaimer reads, "At Panera, items designated as vegan have no animal sources: no meat, fish, shellfish, milk, egg or honey products, and no enzymes and rennet from animal sources. All items are prepared in the same kitchen area where non-vegan products are prepared. We can prepare your order as you would like it to be; however, we cannot guarantee there will be no cross-contact between our ingredients."