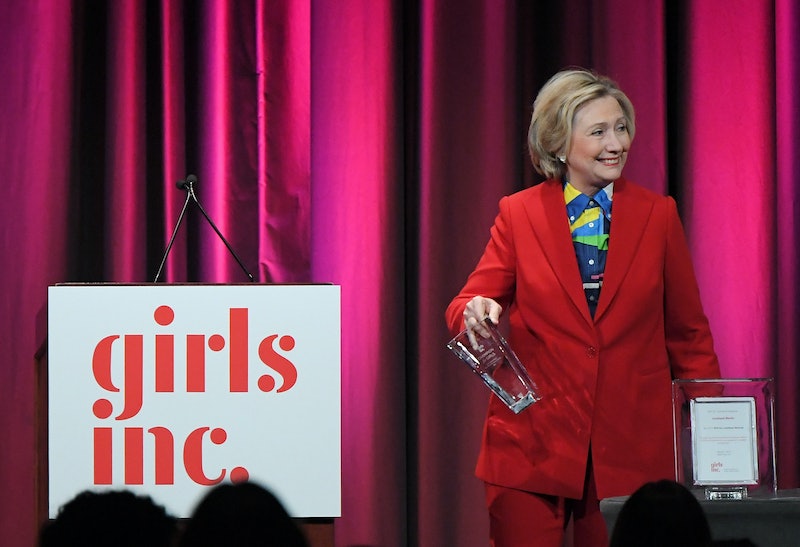 The first law of thermodynamics states that energy can't be created or destroyed rather, there is wide range of directions in which energy can flow and transform. For Libby Chamberlain, the founder of Pantsuit Nation, a Facebook group for Hillary Clinton supporters, the first law of thermodynamics directly applied to her intentions for the group. None of her energy was going to be destroyed because of Clinton's presidential loss — instead, it's been re-channeled.

Chamberlain tells Bustle about how her initial enthusiasm hasn't gone away, even though her initial plan for Panstsuit Nation has evolved. Her original vision for the the Pantsuit Nation Facebook group was to create a safe hub for Clinton supporters, in anticipation of a Clinton presidency.

"A lot of what happened in Pantsuit nation in the weeks leading up to the election, was thinking about how this group could be useful and supportive in rallying around her platform when she was elected as president," says Chamberlain. "We knew she would face unprecedented obstructions from House and Senate. I was thinking that Pantsuit Nation would be this well of supporters who could figure out ways to rally around what Clinton was going to be pushing through in regards to legislation."

Thus, when it was officially announced that Donald Trump won the election, it threw a huge emotional and psychological wrench in the concept behind Pantsuit Nation, an entire group built around the anticipation of the first female president of the United States.

However, Chamberlain made it abundantly clear that neither she, nor the rest of the group planned to resign their mounting energies due to disappointment.

"Rather than just throwing up my hands and saying, 'Let’s give up,' I had to believe that Pantsuit Nation could still be a powerful organizing tool," Chamerlain says. "There are people who are life-long activists who feel really comfortable calling their senators, showing up to a Town Hall, or you know, marching. But there are also a lot of people in Pantsuit Nation who have never been involved in civil engagement. Finding ways to bring that entire group together is challenging and crucial."

One of the ways that the over 3 million members of Pantsuit Nation have been able to transfer words into physical actions, has been through the development smaller local chapters of the group, both online and in person.

"We actually have 20 local chapters that are up and running, so we’ve been working really hard in the last few months to make sure local leaders have what they need to run those," Chamberlain says. "Some of them are still primarily online groups, trying to combine that sense of solidarity and community and just having a place to talk, with grounded activism. We have a group in Southern California who get together to prepare kits for women’s shelter, and we have some other groups organizing events."

"It’s really exciting to continue to harness this energy around storytelling which drives change."

However, the evolution and shifting direction of Pantsuit Nation hasn't been all roses. According to the Huffington Post, on Dec. 19, Chamberlain wrote a Facebook post stating that select posts from Pantsuit Nation would be included in a book detailing the genesis of the group. She later made another Facebook post clarifying that she'd only include stories with the author's permission.

Even so, the reactions from group members and critics, were understandably varied, with some feeling violated. One Twitter user with the name @catherineburr tweeted "People poured their heart and soul out to #PantsuitNation but it turned out to be just another quest for fame and fortune."

Still, others expressed happiness at the news, like Twitter user @sparkaleigh who tweeted "SO excited to help get this book out there!"

"We're looking at exploring multimedia storytelling, instead of just Facebook posts," Chamberlain says, who adds that Pantsuit Nation has been considering exploring doing more through video and audio, as well. Regardless, she vows the group will keep working, even if its 2017 aims are very different from what she initially conceived. "It’s really exciting to continue to harness this energy around storytelling which drives change."