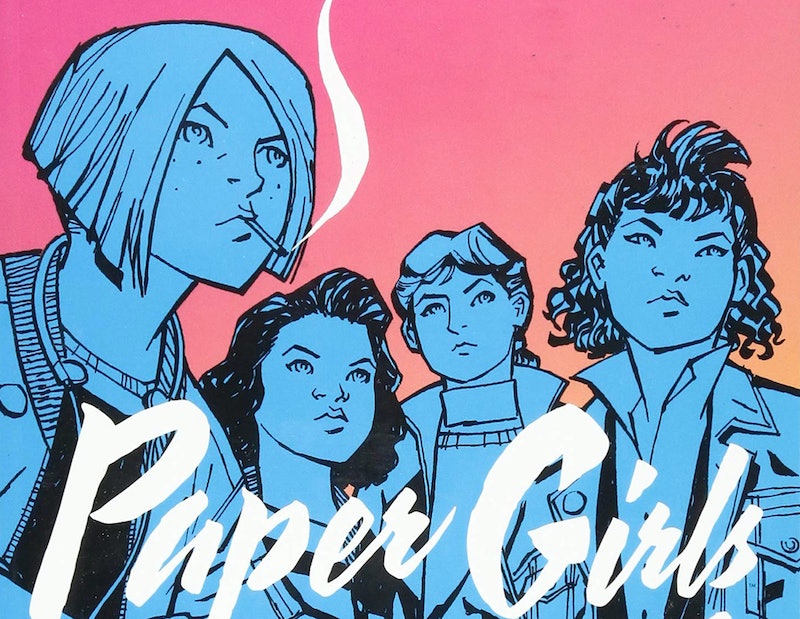 "I am on a curiosity voyage, and I need my paddles to travel,” Dustin tells a very cross librarian in season two of Stranger Things. “These books — these books are my paddles.”

For me, lately, those paddles have been Paper Girls, a graphic novel series from Image Comics, which is releasing the 30th and final issue on July 31. Where Stranger Things gives viewers Will, Mike, Dustin and Lucas, astride their ten-speed bikes as they ward off supernatural phenomenon, Paper Girls gives readers Erin, Mac, KJ and Tiffany, four no-nonsense, tough-talking paper delivery girls.

Paper Girls is set in the suburban town of Stony Stream in 1988. It's a quiet town — that is, until a run-in with time-travelers from the future sends the four lacrosse stick wielding, cigarette smoking, bike riding tweens on a journey through space and time, including stints in the prehistoric era, the early and current 2000s, and the far future. There are many different timelines and characters to follow, but your trust is never misplaced in writer Brian K. Vaughan, who ties each five-issue volume up before bouncing his characters into a new timeline, or artist Cliff Chiang, who completes the series with his otherwordly visuals. Vaughan was unavailable for interview, but Chiang tells Bustle that "having a cast of girls puts a much-needed twist on things. It's fresh, it's relevant, and for me personally, it was really meaningful to follow this diverse group of girls. In comics especially, we don't need the same stories about the same kinds of people we've traditionally been given."

"What would your 12-year-old self think of you now? Questions like that go beyond nostalgia."

The first Paper Girls story arc offers the same Converse High Top-clad nostalgic spirit of Stranger Things. Even when the paper girls are in different timelines, a neon pink and baby blue aesthetic dominates the visuals. Chiang’s artwork seamlessly cements the girls as transplants from the 1980s, no matter what time period they're in. The teased bangs and popped collars remain, even as the girls encounter pasts and futures well beyond their imaginations.

"We're only in the '80s for our first arc but that perspective informs everything after," says Chiang. "Seeing the various futures and the prehistoric past through the girls' eyes and that cultural context is what makes it surprising and compelling. What would your 12-year-old self think of you now? Questions like that go beyond nostalgia."

Unlike Stranger Things, the past is far more potent in Paper Girls, especially because Vaughan breaks the cardinal rule of time travel and allows the characters to meet their future selves. Of course, the paper girls use that power to try to change their fates — with various degrees of success.

"I've heard that time-travel stories are fundamentally about regret, about going into the past to fix mistakes, but I think Paper Girls is more optimistic."

In Volume 2, protagonist Erin meets her adult self. As you can imagine, Adult Erin is shocked, and she takes a Xanax to calm her nerves. “Are...are those drugs? … Are we sick?!” exclaims Young Erin. It's a humorous moment, but the future isn't so kind to all the characters. Fellow paper girl, Max, seeks out her adult self, only to discover she will die of cancer as a kid.

"I've heard that time-travel stories are fundamentally about regret, about going into the past to fix mistakes, but I think Paper Girls is more optimistic," says Chiang. “It's about the things we can do now to make sure we don't end up miserable old-timers. Looking over the run, I'm struck by how much of it is about love, hope and friendship. I'm good with that.”

Paper Girls comes to an end this summer, and Vaughan and Chiang have little to regret: The series is set to be adapted into an Amazon Prime TV show, written by Stephany Folsom of Toy Story 4. The show, undoubtedly, will draw in fans of Stranger Things.

"The comparison is pretty inevitable and honestly, at first I was frustrated because it's not quite fair to either series," says Chiang. "I really enjoy how Stranger Things celebrates sci-fi and horror films from the time. They do an amazing job revisiting the era with a modern storytelling sensibility. It's such a heartfelt love letter to '80s pop culture, and I think that's why people have connected with it.”

Yet, Paper Girls is not the feminist Stranger Things that I long for it to be, as the writer, artist, colorist, and letterer are all men. Vaughan’s apt for writing female characters — the protagonists in Saga and Y were also women, along with the comics' artists — and Chiang’s Wonder Woman chops are no replacement for the actual perspective of women and femmes.

"No matter how fantastical the worlds we create are, the stories we tell have to reflect the world we live in and that means diversity in race, gender, and sexuality,” says Chiang when I ask him about this disparity. "As artists it's our job to empathize and consider viewpoints that aren't our own. We may not always be successful at it, but we have to try our best. Having more diversity and more inclusion in our stories can only be a good thing, just as having more diverse voices telling stories matters too."

Inclusively made or not, what I take from Paper Girls and Stranger Things are the same: Compelling storytelling, a reminder of the beauty of the past, and the hope that a group of scrappy kids can save the world. Lately, that hope feels especially important.