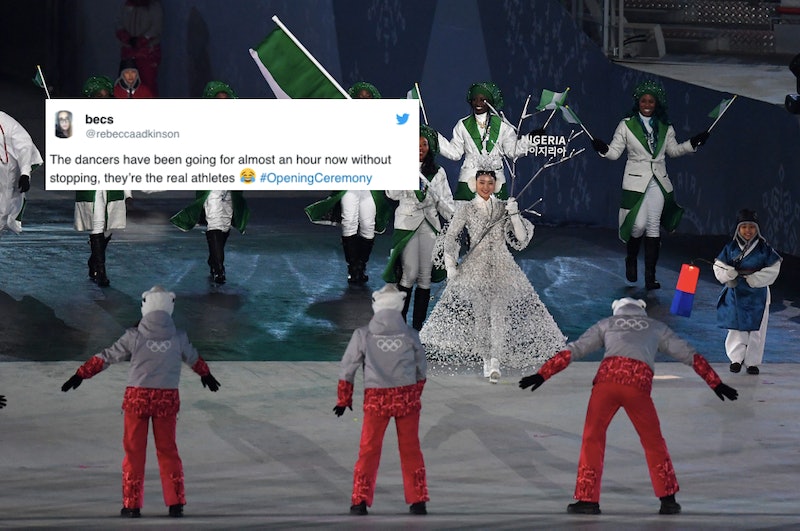 The PyeongChang Winter Olympics opening ceremony had many standout moments, from adorable children to a virtual reality segment to amazing giant puppetry. But the standout stars, according to social media, were a particularly hardy group: the collection of pink-suited dancers at the Parade of Nations who stood in the middle of the stadium, performing coordinated dance moves over and over again as every single country walked in front of the audience with their flags. And the dancers, with their pink ski pants, tiger hats, and massive enthusiasm — despite dancing non-stop for an hour in freezing temperatures — have rapidly gone viral.

The PyeongChang Games will have 16,200 South Korean volunteers and performers, according to the official PyeongChang site, but these dancers got the lion's share of attention for their adorable moves and inexhaustible energy. Their coordinated, charming dancing was extremely easy to copy at home, but they also improvised: when Psy's "Gangnam Style" was played at one point during the athletes' parade, they all stopped their coordinated routines and began to do the South Korean star's trademark dance. The Parade of Nations traditionally takes quite a long time, and the PyeongChang parade was no exception — and these amazing dancers performed non-stop for nearly an hour. Not only are people seriously envious of their stamina, we kind of want their hats. Here are some of the best memes and tweets the internet could muster about the incredible opening ceremony dancers.

2. The Hype Game Is Strong

7. Not All Heroes Wear Capes

9. We Feel Them On A Spiritual Level

13. Cheryl In The Back Always Stops Halfway

16. Reminder That All Eyes Are On The Olympics (Yes, Including The Dancers)

17. But Their Enthusiasm Is Truly Infectious

18. Gone But Not Forgotten

19. But They Weren't The Only Ones With Incredible Moves

There was other dancing later in the opening ceremony — no, not just the jumps that the shirtless Tongan athlete did as he led his team into the arena carrying the flag — and it couldn't have been more of a contrast to the coordinated dad-move crew and their ski-ready outfits. Before the parade of nations, hundreds of female dancers with traditional Korean drums flooded the stage to produce a deafening percussion symphony, and then finish in the shape of the Korean flag. And after the Olympic Flame was lit by Korean superstar figure skater Yuna Kim, groups of male dancers performed swift, high-octane choreography imitating Korean legendary creatures, designed to make the crowd "feel" the energy of the games.

But it was the tiger-hatted dancers that audiences loved, because you have to be a special kind of performer to cheerfully wiggle your hips in repeated circles in front of billions of viewers. Dancers weren't only in the center of the stadium as the athletes came out, either; they were following each delegation, doing delighted moves behind them and making sure they were marshaled into the correct place for the ceremony. As a celebration of dance moves, it was a pretty amazing party.

It's a lesson that dancing is for everybody, even if you have the coordination of a three-year-old — and that the opening ceremony doesn't have to involve glitz or parachuting acrobats to produce a truly memorable (and uniquely viral) moment. The PyeongChang tiger-hat dancers have reached firm meme status just by being bundles of joy with endless "swimming" dance moves and excellent headgear.