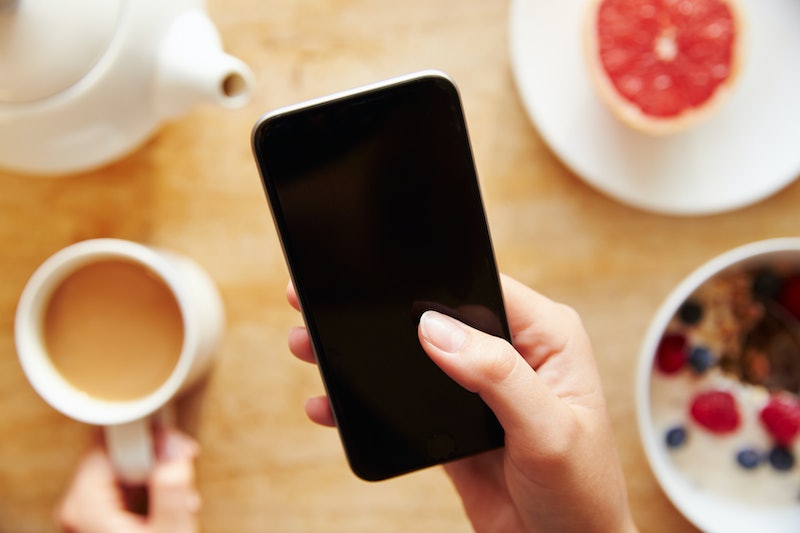 While much of today's discussion about kids and technology revolves around The Youths being too into their smartphones and tablets, it turns out parents who use technology during family time may be adversely affecting their kids' behavior and overall relationship with them. According to a new study, parents who are on their phones or watching TV during activities like meals can cause their children to go into Angelica Pickles mode, and we shouldn't blame the kiddos for doing so.

The study, done by Brandon T. McDaniel of Illinois State University and Jenny S. Radesky of the University of Michigan Medical School and published in the journal Pediatric Research, looked into what the researchers call "technoference," where technology interrupts relationships, according to a report on the study posted on Science Daily.

Specifically, the researchers describe technoference as "everyday interruptions in face-to-face interactions because of technology devices," whether that's someone being on their phone constantly during dinner, a college student using their laptop to bounce around on the internet during a professor's lecture, or someone gaming while their partner is trying to have a conversation.

We see little instances of technoference all around us, but with parent-child relationships specifically, researchers found that "[e]lectronic device use likely deprives parents of the opportunity to provide meaningful emotional support and positive feedback to their children which causes their offspring to revert to even more problematic behaviour such as throwing tantrums or sulking," according to the study report posted on Science Daily.

To investigate technoference, researchers worked with 172 two-parent families who each had at least one child five years of age or younger. Each parent answered online questionnaires in 2014 through 2016, indicating "how often per day different devices interrupted their conversations or activities with their children."

Parents were also asked to rate both what researchers called the children's "internalizing behavior," aka behaviors like sulking or obviously having their feelings hurt, and their "externalizing behavior," aka lashing out or throwing a tantrum. Last but not least, parents were asked to report how they felt by rating their levels of stress and depression, as well as how they felt about the support or lack of support they were receiving from their parenting partners, according to the study report.

The prevalence of tech was immediately apparent in the results: "In almost all cases, one device or more intruded in parent-child interactions at some stage during the day," according to researchers. They noted in the study report that parents who struggle with their children's behavior might use technology as a "refuge," but said "this tactic [has] its drawbacks."

Researchers concluded that when technoference provoked bad behavior from children, it could push parents seeking tech refuge into a vicious cycle.

In a 2016 piece for Psych Central, licensed psychologist Dr. Marie Hartwell-Walker encouraged parents to put away their smartphones and engage more with their kids because parent-children interactions are vital. Hartwell-Walker said in her piece that in some cases, children asking for attention — like calling out a "look at me!" — means "your kids [are] asking for your approval and encouragement. When you do look, really look, and smile and wave, the kids soak it up."

Hartwell-Walker added that doing this kind of esteem-building can help kiddos out later. "When parents put their phones down (or turn off the TV or shut down their computer) and talk to [their kids] seriously about what they are doing, their skills grow and their self-confidence blossoms," she wrote. "Later, when those same kids hit the inevitable troubles of life, they will have what it takes to cope."

Ultimately, "[o]ur kids need our first priority to be our relationships with them, not with our phones," Hartwell-Walker wrote. "Children learn how to be with other people and how to love by being with people who love them, teach them, encourage them and comfort them."

And according to this new study, technoference can put a serious block up between parents and their kids, preventing these crucial interactions. For parents who think they may be fostering technoference in their relationships with their kids, there are plenty of ways to get help, including speaking with a mental health professional like a family counselor. You can also check out apps that reward you for staying off your phone, like Forest and Hatch. But however you choose to try minimizing your tech usage during family time, know that even if you think you're in a cycle, it's not to late to break out of it and get some quality face time in with your kiddos.