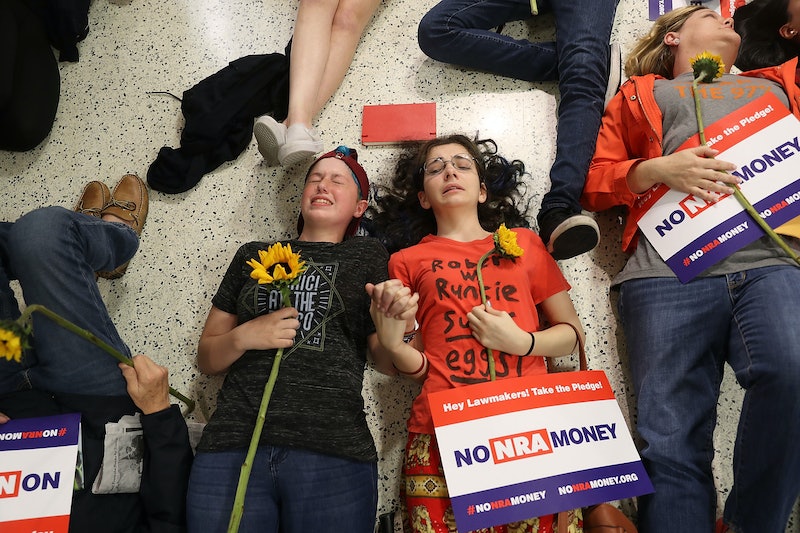 Publix will suspend political donations after the Parkland students staged die-ins to protest pro-NRA donations on Friday. Gun control activist David Hogg and other students from Marjory Stoneman Douglas High School in Parkland, Florida, staged the die-in to protest the Florida-based grocer's donations to Adam Putnam, a gubernatorial candidate and self-proclaimed "NRA sell out." The peaceful protest was met with screams from supporters of President Donald Trump who opposed the activists' anti-NRA message.

During the die-in in the Coral Springs store, a shouting match between the protesters and supporters of President Donald Trump erupted. In one video, the Trump supporters appear to be yelling "vote Trump" at the activists laying on the ground. During their protests, the students, led by Hogg, yelled, "Hey, hey NRA, how many kids have you killed today?"

Current and former leaders of Publix as well as heirs to the founder have donated $670,000 to Putnam in three years. The most recent contribution, the Tampa Bay Times found was a $100,000 donation in April, and it was the largest. Putnam is the agricultural commissioner and is running to replace Florida Gov. Rick Scott.

Students drew outlines of human bodies in chalk in the parking lot at the Publix locations in Coral Springs to represent the 17 students and faculty who died in the Valentine's Day shooting. Written next to the chalked-outlined bodies was a riff on the Publix slogan: "Where shooting is a pleasure."

Then, inside, the young activists lay still on the floor for 12 minutes — the same length as the shooting at their high school. Some brought sunflowers to hold as they lay down, representing the flower Parkland victim Joaquin Oliver bought for his girlfriend on the day of the shooting, CNN reported.

Following the peaceful protest and growing social media campaign, Publix released a lengthy statement on Friday night, saying it will be evaluating its corporate donation policies.

Here's the statement, via the Tampa Bay Times:

At Publix, we respect the students and members of the community who have chosen to express their voices on these issues. We regret that our contributions have led to a divide in our community. We did not intend to put our associates and the customers they serve in the middle of a political debate. At the same time, we remain committed to maintaining a welcoming shopping experience for our customers. We would never knowingly disappoint our customers or the communities we serve.

Publix previously told the Tampa Bay Times that the company has never donated to the NRA. The company employs more than 175,000 people in Florida, with stores in seven states across the south.

The activists found out about their victory later on Friday. Diego Pfeiffer, a senior at Stoneman Douglas who helped organize the die-in protest, said he had been at Publix for almost 14 hours by the time it was all done. Pfeiffer and Hogg arrived at 3 a.m. to draw the chalk outlines.

"I'm really, really happy, especially at the fact that peaceful protest actually works," Pfeiffer told the Tampa Bay Times after hearing that Publix would cease political donations. "It shows that people are listening even though a lot of people vocally don't support us."

After the protest, Hogg tweeted about getting into "good trouble". ("Good trouble" is a popular phrase from civil rights activist Georgia Rep. John Lewis when describing his activism with Martin Luther King Jr.)

"The bond that good trouble and love creates will never be broken by hate and violence. #GoodTrouble #TYPWW," Hogg tweeted, along with a photo from the protest.