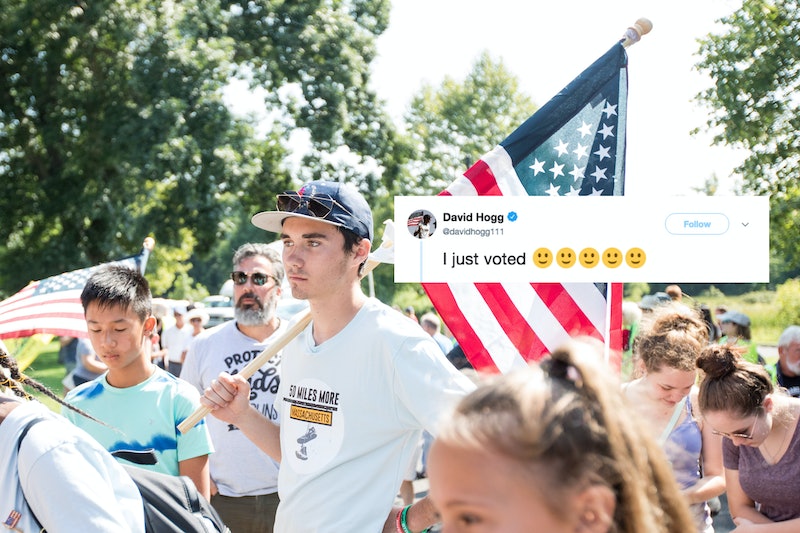 Students at Marjory Stoneman Douglas High School in Florida saw a horrific shooting before they could see the inside of a voting booth. But what's indelibly changed their lives has empowered them to speak, first at rallies, and this week, with their votes. The Parkland survivors' tweets about voting for the first time held an uncontainable spirit as voters headed to the polls for the state's primary elections.

Several student survivors of the February 2018 shooting have become prominent voices in the fight against gun control. Some joined efforts to organize and boost “March For Our Lives," the movement that saw gun violence prevention marches, a demand for stronger gun laws and a push to get social media followers to vote, according to The Hill.

On Tuesday, several Parkland figures tweeted about the importance of voting. Fred Guttenberg, a father who became a vocal activist after his daughter Jaime was killed in the massacre, urged his Twitter followers to vote.

“If anyone has not yet voted and needs some incentive, I am just leaving from my visit with Jaime at the cemetery,” Guttenberg wrote next to a picture of his daughter's grave. “Vote as if your life may depend on it.”

“The young people will win,” tweeted David Hogg, one of the most recognizable faces from the movement. The same phrase sits across his Twitter banner photo.

Another student, Kyra Parrow, told her followers that she became an adult the day after the shooting. "I voted for the first time," she wrote, before urging others to get out to the voting booths to do the same.

One teen, Delaney Tarr, wrote a series of tweets that captured both the heartbreaking reality of the shooting and the hope that came with voter activism. Carmen Schentrup, person whom Tarr is referring to in her tweet, was an accomplished high school senior who was one week away from celebrating her 17th birthday, according to NPR. Schentrup was killed in her AP psychology classroom.

Tarr also shared a photo of her "I Voted" sticker, usually given to voters after they have cast their ballot. The sticker is positioned next to framed words painted on the ground, reflecting the spirit of her tweet: "Stop here, appreciate life for a minute, and smile."

Tarr also tweeted out a cartoon explaining the historic weight of simply casting a vote.

Cameron Kasky, a 17-year-old junior at the time of the shooting and a founder of the March For Our Lives movement, also encouraged people to vote, but his tweets had a more urgent tone.

"BROWARD COUNTY: Today is the day. Go cast your vote and help us rebound from the embarrassing turnout we’ve had so far," Kasky wrote in a tweet on Tuesday. "If any county should be voting in record numbers, it should be Broward. We need change now more than ever. See you all at the polls."

Students from Parkland have been some of the most electrifying voices on gun control in recent history, with political pundits pointing to their youth and fearlessness as a key component in their efficacy. Though some of these students have graduated, there's little doubt that these students will continue to stay vocal and visible in their fight against gun violence.

More like this
The Lionesses Are Calling For Equal Access To Football In Schools
By Sophie McEvoy
'The Capture' Is Finally Back – & S2 Looks Tense AF
By Sophie McEvoy and El Hunt
The Best Memes & Tweets About Rachel's Group Date On 'The Bachelorette'
By Alyssa Lapid
Gassed Up Promises All Things Action, Risk, & Redemption
By Frances Stewart
Get Even More From Bustle — Sign Up For The Newsletter