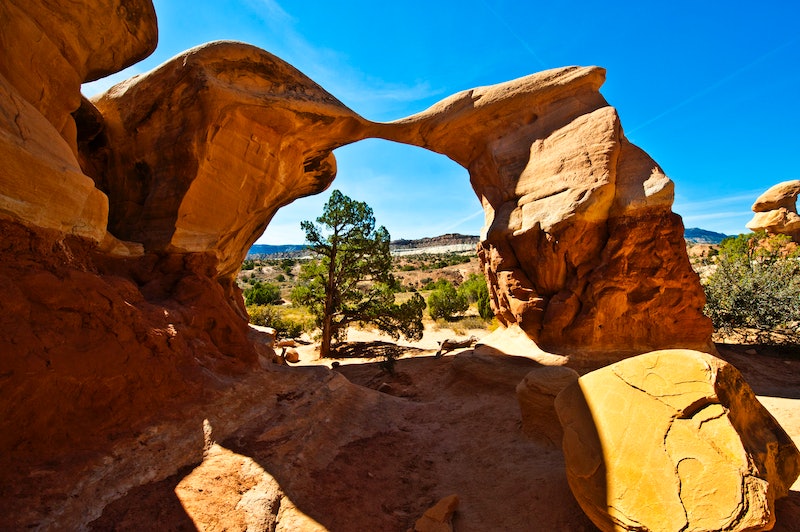 If you go to browse for brightly-colored fleeces tonight, you'll find a serious message about national lands on Patagonia's website instead. Before you can shop online, the outdoor clothing retailer wants to make sure you know that "the president stole your land."

The company posted this message on Monday evening in reaction to the president's decision to dramatically shrink two national monuments in Utah. The monuments, Bears Ears and Grand Staircase-Escalante, are home to sacred lands that belong to several Native American tribes. The decision will scale back Bears Ears by 85 percent, and cut Grand Staircase-Escalante in half, opening up these lands to developers.

The removal of federal protections for these national monuments is the largest in history. Patagonia called the move "illegal" and said it would fight Trump in court over it.

The move is one of the first in what is expected to be a dramatic scaling back of national monuments by the Trump administration. In September, Interior Secretary Ryan Zinke prepared a report for the president suggesting that he shrink or change the boundaries of ten different national monuments.

Bears Ears was designated a national monument by President Obama just one year ago, while Grand Staircase-Escalante received the classification from President Clinton in 1996. Under the Antiquities Act of 1906, presidents can designate significant public lands as national monuments in order to preserve and protect them. Many of the Native American tribes that have land on Bears Ears and Grand Staircase-Escalante consider it sacred. These sites are rich in history, and without protection, they’re subject to dangers such as looting and vandalism.

Many conservatives who view federal protections of these lands as an example of government overreach have championed Trump’s decision. Utah Senator Orrin Hatch thanked President Trump and Secretary Zinke for scaling back the monuments, writing in a statement that the decision "represents a balanced solution and a win for everyone on all sides of the issue."

But environmental activists feel differently. The Trump administration's decision will make these lands vulnerable to harmful actions by private groups that wish to use the parks for profitable operations such as mining, logging, or oil and gas extraction. New York Times reporter Julie Turkewitz noted that the move "could trigger a legal battle that could alter the course of American land conservation," potentially opening millions of acres of land to private influence.

As The Salt Lake Tribune noted back in August, mining companies have for years targeted sites like Kaiparowits Plateau, which is part of Grand Staircase Escalante and home to fossils dating back to the Cretaceous Period. In October, Senator Hatch told reporters that he had received word from the president that this site would be opened up for mining. Monday's announcement means that these lands will soon be vulnerable to drilling and mining.

Native American tribes that will be affected by the shrinkage of the parks spoke out immediately against the decision. In a statement, Navajo Nation president Jonathan Nez said that the announcement marked "a sad day for indigenous people and for America." Ethel Branch, the attorney general of the Navajo Nation, said that the tribe would file suit in conjunction with other Native American tribes in response to the decision.

The group that pushed for the U.S. government to designate Bears Ears as a national monument, Utah Diné Bikéyah, published a large ad in The Salt Lake Tribune declaring, "President Trump is trying to destroy our heritage."

And writer Shaun King pointed out the apparent hypocrisy of Trump's actions, noting that while the president has been quick to defend Confederate monuments as a symbol U.S. heritage, he didn't hesitate to make a sweeping decision that could significantly affect native lands.

If the Sioux Rock Standing Tribe's year-long battle to save its land from the construction of the Dakota Access Pipeline is any indication of the challenges Native American tribes face under the new administration, the fight to protect Bears Ears and Grand Staircase-Escalante will not be an easy one. Last February, the Army Corps of Engineers authorized the final phase of construction for the pipeline despite continued resistance from protestors.