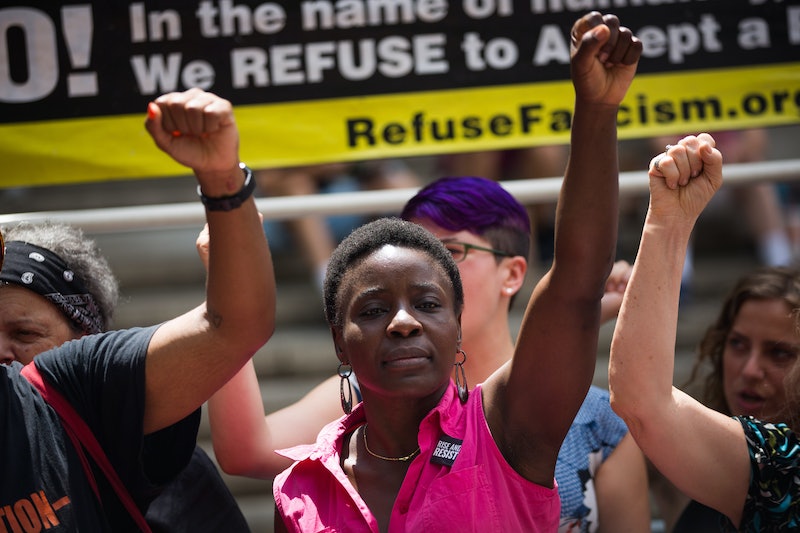 At a hearing Tuesday morning, Patricia Okoumou was sentenced to probation for climbing the Statue of Liberty on the Fourth of July to protest President Trump's immigration policies. Okoumou, herself a Congolese immigrant, faced the possibility of 18 months in prison, The Root reports, but a judge opted to give her community service and probation instead of time behind bars.

Okoumou's demonstration resulted in a four-hour standoff with police and made international headlines. She later explained that she was protesting Trump administration's family separation policy, and in December, was found guilty of trespassing, interference with agency functions, and disorderly conduct. AM New York reports that Okoumou showed up to her hearing Tuesday with her face wrapped in tape to protest her prosecution.

"I do not need probation and I do not belong in prison," Okoumou told the court during her hearing, according to BuzzFeed News. "I am not a criminal."

Presiding Judge Gabriel Gorenstein, who reportedly asked Okoumou to removed the tape from her face before sentencing, ultimately gave her 200 hours of community service and five years' probation. According to AM New York, Gorenstein warned her that if she commits any protest-related crimes during her probation, she could face jail time.

Okoumou's arrest in New York after her Fourth of July demonstration didn't put a stop to her activism: In February, she climbed a detention facility for immigrant children in Austin, Texas, CBS Austin reports, resulting in an eight-hour standoff with police, while SILive.com reports that Okoumou has twice been arrested while protesting at the Eiffel Tower in Paris. Before her hearing on Tuesday, she said that she would launch a hunger strike if jailed, AM New York reports.

In an interview with Public Radio International, Okoumou says that she'd never protested in her life prior to 2016, but began doing so daily outside Trump Tower in New York after Trump was elected president. After the Trump administration began separating immigrant children from their parens at the border, Okoumou says she began having "nightmares about the children in cages," and decided to scale Lady Liberty during a Fourth of July protest planned by the group Rise and Resist.

“I didn't tell a soul and I was not intending to tell a soul because there was no time for me to be discouraged or be swayed in a different direction,” Okoumou tells Public Radio International. “This was a mission.” After the standoff, Trump referred to Okoumou as a "clown," which she says she views as a victory because "the president was addressing my action."

U.S. Attorney Brett Kalikow had asked Gorenstein to jail Okoumou for 30 days and give her three years probation, the New York Post reports, arguing that "her behavior since her arrest, and especially since her conviction, has shown flagrant disregard for the law and for the court." Her attorneys asked that she be given just one month of home confinement and community service instead.

According to ABC 7's Candace McOwens, Okoumou indicated to reporters on Tuesday that she will continue to climb buildings in protest after her sentencing.