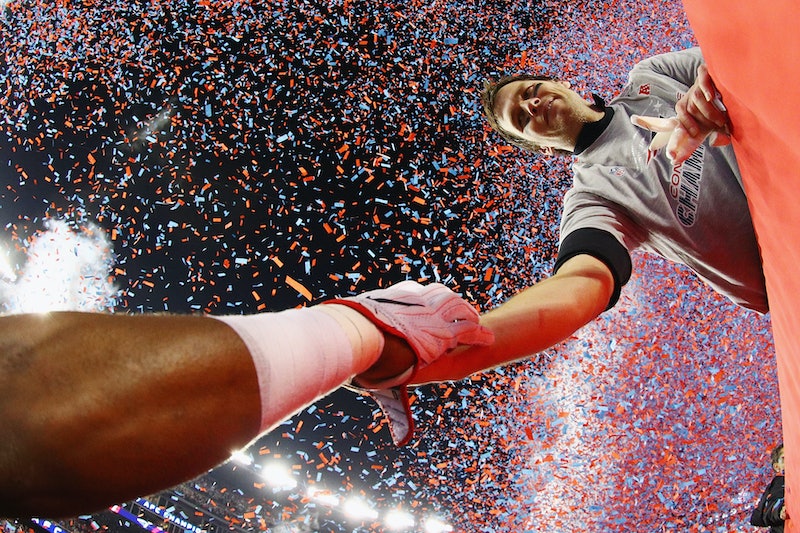 While watching a massive, nationwide event can be a fun, community-building activity to engage in, waiting until that big event is over so you can start looking on the internet for memes about said event can be pretty tough. I mean, sharing memes that are relevant to current events is just about the most fun, community-building thing to do — in 2018, anyway. So let's be real — when it comes to the biggest football game of the year on Feb. 4, all of the Patriots Super Bowl memes that will make their way onto the internet are going to be one of the best parts of the game — aside from the guacamole you had while you watched the game (or the commercials). After all, the Patriots are no stranger to the Super Bowl, and they were last 2017's champs.

You can always count on the internet to capture every eye roll, every victory dance, every bizarre/unintentional fashion mishap, every WTF moment, and every single hint of ridiculousness that happens in any live event. And because the internet can be a great place sometimes, all of those happenings generally become hilarious memes. It's the circle of life. Kinda.

So, in order to make it easier for you to see all the hilarious memes floating around the internet, I've collected a few of the best about the New England Patriots below, including ones on the hero that is Tom Brady (praise hands emoji), a few you can send to the Patriots haters on your friends list (you definitely know who they are), and some to remind the world how the Eagles have never won a Super Bowl (in case they forgot). They're all hand-selected to show off every special, hilarious, and inspirational moment that the Patriots brought to our screens, into our homes, and, of course, on to our social feeds. Here are the best Patriots Super Bowl 2018 memes that fans will love:

You know who the haters are — and how fun is it to send this to them when they're upset?

2. It's Not Fun When You're Not A Patriot

I mean, they straight up lied to you.

3. Thank You So Much For Your Support

It's really basic math, you know?

4. That Ugg Life Tho

6. When You Want To Throw Some Shade At An Eagles Fan

Here's a way to kick 'em when they're down — and also have someone hold your beer for you.

7. When You Wanna Throw Even More Shade

You're basically on a social media shade spree at this point.

8. When It's Time To Brag About How Many Super Bowls The Pats Have Won To Everyone Who May Have Forgot

9. When Your Team Makes Quite ~An Entrance~

Can your team ride in like that? Didn't think so.

10. For The Haters Out There

But send it with a wink so you don't start a Twitter fight with anyone.

You know, a reminder to anyone who forgot about all those Super Bowl rings.

12. Simple And To The Point

And it's just not pretty.

14. When You're Still Not Done Throwing Shade

...and you're still bitter that your mail is always late.

There you have it — New England Patriots memes to send to your friends, share with an Eagles fan or five, and just look at with heart eyes whenever your heart desires.