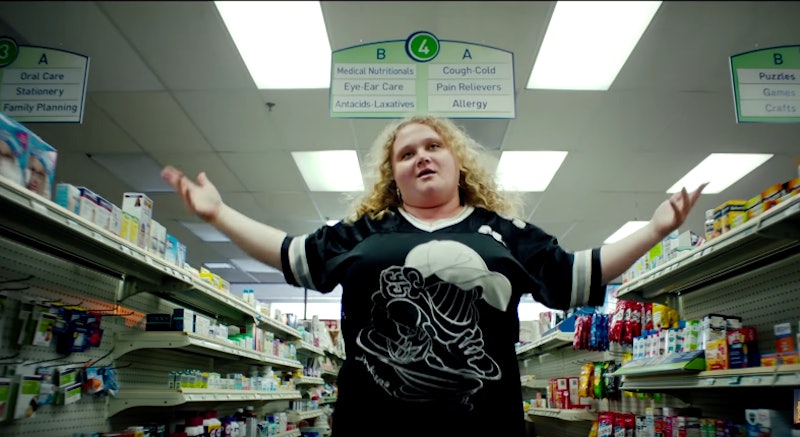 Lord and Ladies of the royal court, bow down. Patti Cake$, the Geremy Jasper directed drama that made waves at the Sundance Film Festival back in January, is officially making its way to theaters this summer and it could just be a hit. The drama stars Australian actress Danielle Macdonald in her breakout role, and it won’t released until August 18. But, to hold you over until then, we have an exclusive first-look at the film.

In the indie film, Macdonald plays Patricia Dombrowski (aka Killa P, aka Patti Cake$). Patti Cake$ is a 23-year-old aspiring rapper searching for her big break, all while navigating life in her small hometown in New Jersey. Surrounded by most of her high school classmates who mainly still bully and taunt her, she writes music and books small performance gigs while desperately searching for a way out of New Jersey with help from her grandmother (played by Cathy Moriarty) and her best friends, Jheri (Siddharth Dhananjay) and Basterd (Mamoudou Athie). Patti Cake$ looks like a fun ride, and in case you need any more convincing, catch this exclusive clip from the film.

In the hilarious first look, Patricia arrives at a drugstore where her best friend, hype man, and fellow aspiring rapper Jheri, works. Jheri, who’s in the middle of selling a customer some rash cream in the pharmacy, spots Patricia arriving while peeking at the security footage from the store’s entrance, and as soon as the customer is out of sight, gets on the intercom to announce her arrival. Once he's done introducing her and her several nicknames, she grabs the "mic" and proceeds to do the same for him, only to be interrupted by an unenthusiastic person who reminds them that "this isn't Showtime at the Apollo."

Can you say best friend goals? Patti Cake$ walking into this drugstore is the level of extra I aspire to be someday.