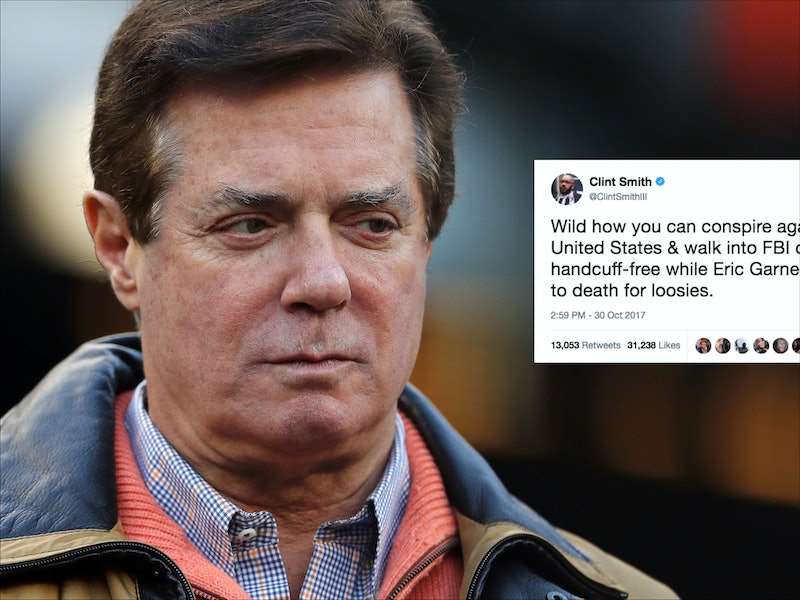 On Monday morning, minutes after CNN and The New York Times revealed that a grand jury had indicted ex-Trump campaign chairman Paul Manafort and his associate Rick Scott, Manafort was led gently into custody by his lawyer. Manafort is facing a dozen federal charges related to alleged collusion between the Trump campaign and Russia (which both Manafort and Trump deny ever happened). On Twitter, doctorate candidate Clint Smith framed the situation as such: "Wild how you can conspire against the United States & walk into FBI offices handcuff-free while Eric Garner was choked to death for loosies."

The 2014 death of Eric Garner still looms large in popular consciousness. Garner had been approached in Staten Island by a police officer who suspected him of selling "loosies" — loose cigarettes. After a heated exchange, the officer, Daniel Pantaleo, put Garner in a chokehold (which are prohibited by the NYPD). Garner, who suffered from asthma, repeatedly said, "I can't breathe," and, shortly afterwards, became unconscious. He was pronounced dead later that day.

It's painful to compare Garner's treatment at the hands of law enforcement to the treatment of Manafort, who was walked without handcuffs into FBI offices in D.C. by his supportive attorney. Of course, Manafort has been convicted of no crime, but neither had Garner. Manafort is, however, suspected of conspiracy against the United States, along with a handful of other federal crimes. Garner was suspected of selling loose cigarettes.

After Dylann Roof murdered nine churchgoers in Charlottesville in a hate crime, he was peacefully taken into police custody, and, after that, brought to Burger King for a free meal. Meanwhile, when Michael Brown put his hands up to signal to officer Darren Wilson not to shoot him, according to onlookers, Brown was shot twelve times. And when a neighbor suspected 12-year-old Tamir Rice of playing with a firearm and called police, Rice was fatally shot.

The issue is not how law enforcement treats those who are suspected of different kinds of crime. The cases mentioned above cover a broad swathe of suspected crimes, from allegedly conspiring against one's own country (Manafort) to owning a firearm (Rice, who, it turned out, was playing with a toy gun). The issue is that the problematic intersection of racial bias and law enforcement has never been more clear as when one compares the treatment of a white public figure suspected of a crime to when a crime is suspected of a young black boy.

To compare the cases of Garner and Manafort is to face head-on the consequences of racial bias in the United States — specifically, the racial bias displayed by members of law enforcement. No matter the severity of the crime, white male criminals like Roof, and suspected criminals like Manafort, appear to be treated with respect and without violence.

Meanwhile, black men and women suspected of very minor offenses or no offenses at all — playing with a firearm; a sudden, swift movement; the selling of loose cigarettes — far too often become the victim of officer-involved shootings. Superficially, Manafort and Brown would seem to have little in common — but what's most clear by comparing their arrests is how Manafort seems to be presumed innocent and Brown guilty.