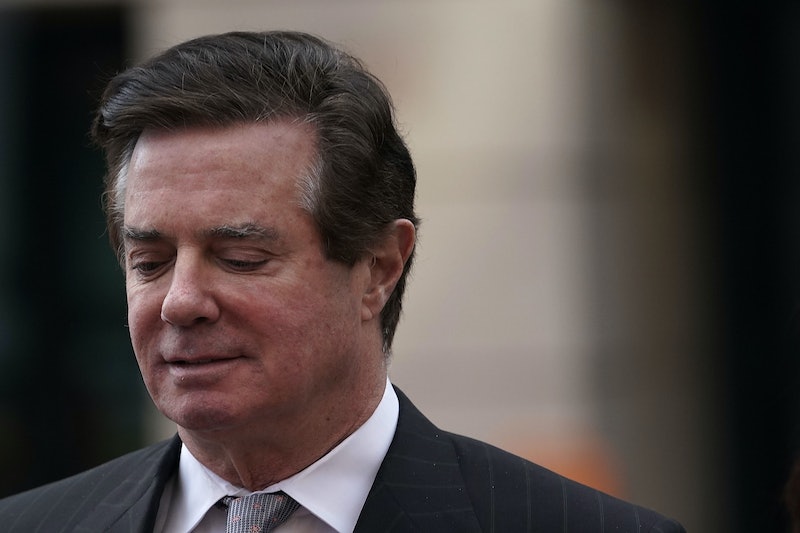 On Thursday evening, a judge sentenced Paul Manafort to almost four years in prison. Trump's former campaign chairman was sentenced for a number of crimes, including defrauding banks and the government, as well as not paying tax on millions of dollars income, CNN reports. But Manafort might end up spending even longer than 47 months in prison, cumulatively. CNN reports that Manafort has to attend a second sentencing next week for separate crimes.

According to Adam Levine, the vice president of news for CNN's Washington Bureau, Manafort gave an approximate four-minute speech prior to his sentencing, where he said in part, "The last two years have been the most difficult years for my family and I. Humiliated and shamed would be a gross understatement." Per Levine, Manafort also said, "I know it is my conduct that brought me here."

Judge T.S. Ellis was in charge of the sentencing, CNN reports, and he opted to give a more lenient sentencing than the 19 to 24 years recommended by the court's probation office. Per the news network, Ellis argued that Manafort had lived "an otherwise blameless life," and that he gave Manafort "a just sentence for [his] conduct."

Ellis said directly to Manafort during his sentencing, "I was surprised I did not hear you express regret for engaging in criminal conduct. I hope you will reflect on that." Ellis later said, "Life is making choices, Mr. Manafort, and living with the choices you make. You made choices to engage in criminal conduct."

In addition to his sentencing of 47 months in prison, Manafort was also ordered to three years of supervised release time after prison, and he will also have to pay at least $6 million to the government, according to CNN.

Manafort's jail time, though much lighter than the recommended amount, possibly reflects a more severe outcome than the one that many might had predicted earlier this year. In September, Manafort was reported to have reached a plea deal with Special Counsel Robert Mueller. But that deal was voided in February, The Washington Post reported, after a federal judge found Manafort to have lied about a number of details central to the Russia investigation. Per the publication, Manafort denied "intentional lying" in any way, but the plea deal was still rendered void.

Following the news of Manafort's sentencing, some have remarked on how his jail time compares to the sentencing of other individuals. Scott Hechinger, the Senior Staff Attorney & Dir. of Policy at Brooklyn Defender Services, pointed out on Twitter that Manafort was sentenced to less time than a client of his had received for accidentally voting while on probation (she received five years, he said). Hechinger added in another tweet, "For context on Manafort’s 47 months in prison, my client yesterday was offered 36-72 months in prison for stealing $100 worth of quarters from a residential laundry room."

Others called out Ellis's assertion that Manafort had lived a "blameless life" up until a certain point. Former CIA Director John Brennan said on MSNBC following the sentencing, "It's an extraordinarily lenient sentence in light of the extent and scope of Mr. Manafort's criminality ... I think this sentence says a lot more about Judge Ellis than it does about Paul Manafort."

Manafort's sentencing comes just over a year after Mueller came forward with an 18-count indictment against him, per ABC — but as the network notes, there's always the possibility of a Hail Mary for Manafort, in the form of a presidential pardon. The New York Post reported that during an Oval Office interview in November, Trump said, "It was never discussed, but I wouldn't take it off the table."