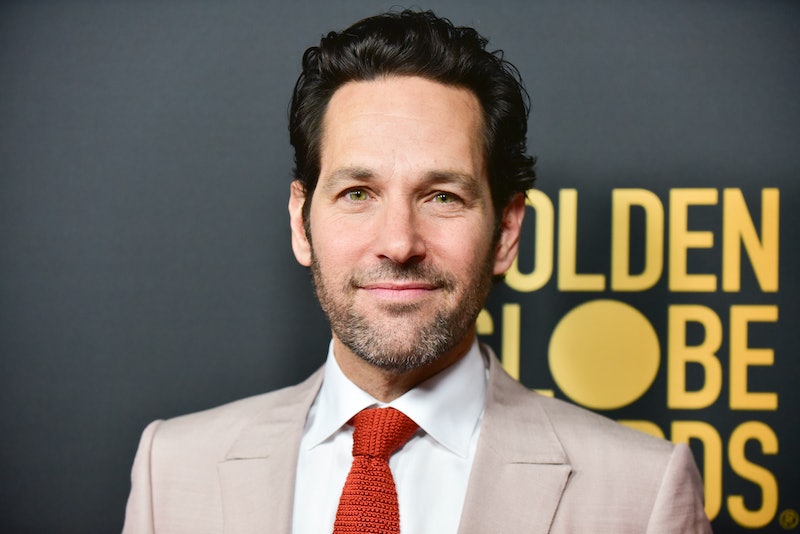 During the cold open of SNL's Dec. 7 episode, Paul Rudd made a surprise appearance with Jimmy Fallon and James Cordon as French president Emmanuel Macron, Canadian prime minister Justin Trudeau, and British PM Boris Johnson, respectively. The politicians were depicted in the NATO cafeteria, where it was soon obvious that Macron and Trudeau were the resident cool kids, combing their hair back like '50s greasers while women clutching binders fawned over them.

Then there was Trump (played as always by Alec Baldwin), who was relegated to the unpopular kids' table with Latvia. He was clearly an outlier at NATO — so much so that Macron had Boris Johnson tape a piece of paper to Trump's back reading, "Impeach Me." At the very end, Melania Trump (Cecily Strong) appeared, revealing that the whole sketch had actually a PSA about bullying her husband (she also plugged the Peloton bike).

These kinds of political sketches — specifically those involving Trump — have become one of the less interesting parts about SNL in recent years. However, it was creative framing for the incident it was based off of. In a hot mic incident on Tuesday, Dec. 3 at the NATO Summit, Trudeau, Johnson, and Macron were caught on camera seemingly making fun of Trump, who did not appear to handle it well.

Rudd and Fallon played their roles with aplomb, using exaggerated French and Canadian accents and whispering with each other about Trump's demeanor. However, it was Corden's Boris Johnson who caught many fans' attention — specifically because he reminded them of late SNL performer Chris Farley. Indeed, Corden's messy, blonde wig had many viewers second-guessing whether they were seeing the late night host or the star of Tommy Boy.

Viewers were also happy to see SNL member Kate McKinnon reprising her delightfully unhinged Angela Merkel impression, which included crushing on Obama (again) and wondering whether she should bring her flugelhorn to the cool kids' table.

Trump, meanwhile, sat with Latvian leader Egils Levits, while a giant tower of hamburgers sat in front of him. If high school is a popularity contest, then it must be doubly so in politics.