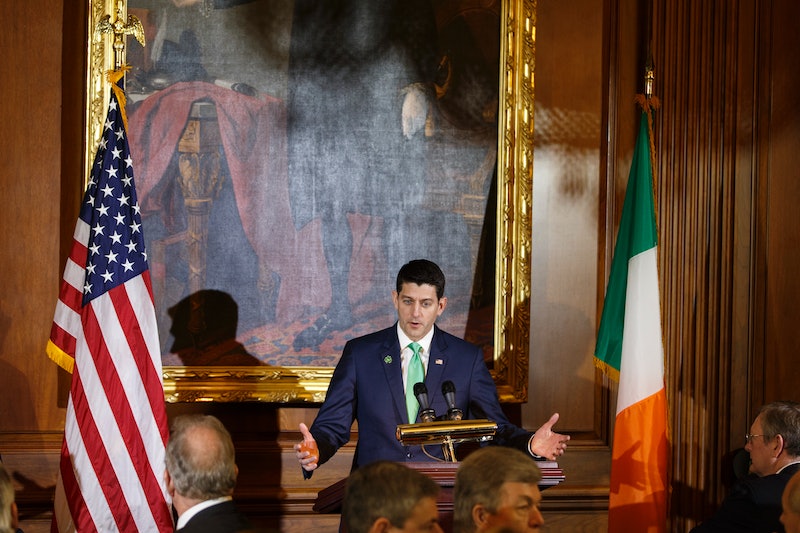 For his final act as speaker of the House, outgoing Rep. Paul Ryan is hoping to give current citizens of his ancestral homeland a little gift. A bill Ryan recently pushed through the House would give Irish nationals access to thousands of additional U.S. work visas. But Ryan's Irish immigration bill has sparked criticism from those who argue he's advocating only for immigrants who look like him — white.

Ryan's bill, which easily passed the House late last month, would grant Irish nationals access to any E-3 visas that went unused or unclaimed in the previous year. Under the current E-3 program, 10,500 visas are reserved just for Australians offered employment in "specialty occupations" that require a bachelor's degree or its equivalent.

Still, that means Ryan's bill stands to give Irish nationals access to just under 5,000 visas each year. Irish Special Envoy to the U.S. John Deasy told Politico the bill was meant to be "reciprocal," with Ireland offering additional work visas to Americans in exchange for access to the unused E-3 visas.

But some have criticized Ryan for moving to increase Irish nationals' access to visas after long blocking a vote on comprehensive immigration reform that could have protected dreamers after President Donald Trump moved to end the Obama-era Deferred Action for Early Childhood Arrivals (DACA) program.

Because while Ryan has, on more than one occasion, appeared to say he'd work to protect dreamers, he ultimately never allowed a vote on legislation that would have done just that. During a CNN town hall in 2017, Ryan told a dreamer he hoped her future would be in the United States before revealing that he and Trump's team were working on what he called a "good, humane solution" for DACA recipients. Earlier this fall, Ryan said dreamers should "rest easy" because Republicans were working with Trump to "fix this issue for these kids."

But Ryan has yet to deliver on his promise of "good, humane" immigration reform that would protect dreamers. In fact, according to The Washington Post, Ryan scrambled to kill a discharge petition launched by fellow GOP Rep. Carlos Curbel earlier this year that would have forced votes on multiple immigration bills. Among those was the DREAM Act, a bill which was widely supported by Democrats and would have granted dreamers legal status. Bustle has reached out to Ryan's spokesperson for comment.

Critics have accused Ryan, who has said his family came to America from Ireland in 1851, of embracing immigrants from his own homeland while allowing those from other regions such as Latin America to be characterized as a potential danger. "Not long ago, 'Anglo-Saxon' Americans were pushing for more immigrants from their homelands, while raging against 'barbaric' and 'violent' Irish immigrants," professor, author, and founding director of the Antiracist Research and Policy Center at American University Ibram X. Kendi tweeted in reference to Ryan's bill. "The characters have changed roles and clothes, but America's immigration story remains the same."