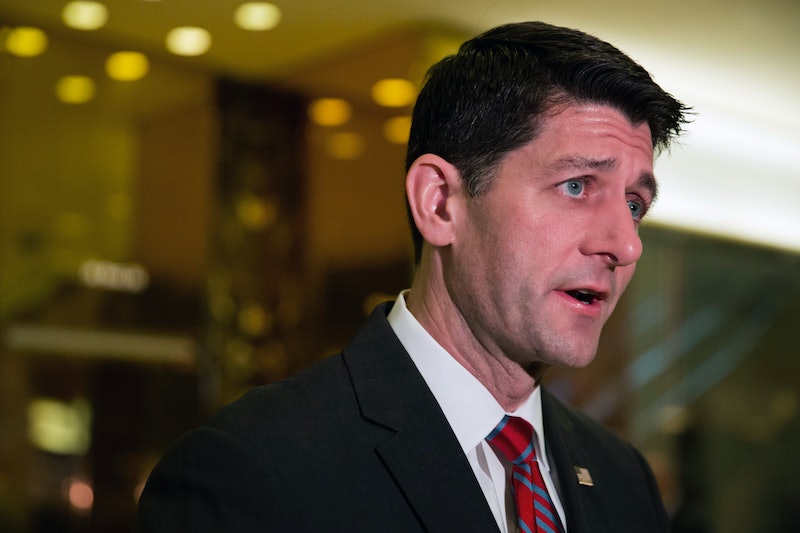 After promising to strip federal funding from Planned Parenthood this week, House Speaker Paul Ryan retired to his office on Capitol Hill. He thought about all the good he would do by eliminating affordable contraception, STI testing, and cancer screenings for millions of low-income women and men. But the House Speaker, apparently, couldn't face the people his legislation would be directly impacting. On Friday, Ryan had security guards block his office from Planned Parenthood volunteers who were attempting to deliver thousands of petitions to the House Speaker.

The volunteers were swiftly escorted away by six security officers, according to Planned Parenthood representatives. Then, the House Speaker's office was suddenly closed. Look at what these people have done, Ryan and his conservative colleagues may have thought.

The poetics of a staunch anti-abortion politician not only going into hiding, but also requesting a mini-fleet of security guards for protection from reproductive rights activists are too striking here to ignore. Ryan may have felt like he was on the defense now — a funny thing to feel, to be sure, when you're the one in control of the House of Representatives and, seemingly, the reproductive health of all American women. But he also unconsciously engaged in a bit of role-playing.

Because the truth is, staff and patients of reproductive health clinics across the nation barricade themselves behind heavy locked doors, metal detectors, surveillance cameras, and armed security guards every day. Some may have volunteers (mostly women) stand outside on the sidewalk, armed only with a neon vest. They're not shielding patients from hot pink T-shirts and boxes of paper petitions. They are resisting the verbal, sometimes physical, harassment from people harboring similar views to the House Speaker and his colleagues.

Ryan has made reproductive rights supporters seem like the agitators and antagonists; the anti-abortion supporters as the defenders. But Ryan, you’re not the one who needs security. And there’s a long documented history of violence to prove this.

According to the most recent statistics from the National Abortion Federation, there have been nearly 2,700 reported incidences of trespassing, more than 1,500 acts of vandalism, 185 arsons, and 42 bombings of abortion clinics since 1977. There have also been roughly 100 attempted arsons and bombings of abortion clinics during that same time frame, and more than 600 threats of bioterrorism toward clinics and their employees.

As protesting outside reproductive health clinics is a favorite past time of anti-abortion activists, the numbers of clinic blockades and arrests shouldn't be surprising — but they are astounding nonetheless. According to data compiled by NAF, there have 844 clinic blockades and over 33,000 arrests since 1977.

The murder or attempted murder of abortion providers and clinic employees is also not uncommon. At least 11 people have been killed in the United States at the hands of anti-abortion violence. The last fatal shooting occurred in November 2015, when a man named Robert Lewis Dear opened fire at a Planned Parenthood center in Colorado Springs, killing three people: two civilians and a police officer. When police arrested Dear, he reportedly yelled "no more baby parts" — a reference to the inciting and misleading rhetoric that spread over conservative media and anti-abortion websites following the July 2015 release of "sting" videos alleging Planned Parenthood illegally sold fetus tissue. (Planned Parenthood hasn't been found of any wrongdoing, neither at the federal or state level.)

Dear's ramblings were not those of a madman (though he has been found incompetent to stand trial). Phrases like "no more baby parts" have been legitimized by the Right-leaning media, and can spark more violence if not curtailed. Just think of how often Fox News host Bill O'Reilly called Dr. George Tiller, the Kansas-based late-term abortion doctor, "Tiller the Baby Killer" on his national news program. O'Reilly's fan base loved it. Tiller was murdered in the foyer of his church.

After every arrest, every incident of harassment, every fatal shooting, politicians like Ryan fail to realize they're not the ones who need security.

More like this
'The Capture' Is Finally Back – & S2 Looks Tense AF
By Sophie McEvoy and El Hunt
The Lionesses Are Calling For Equal Access To Football In Schools
By Sophie McEvoy
Bustle Newsletter: August 16, 2022
By Stephanie Talmadge
These Cheap Things With Near-Perfect Amazon Reviews Will Make Your Home Look SO Much Better
By Dena Ogden
Get Even More From Bustle — Sign Up For The Newsletter