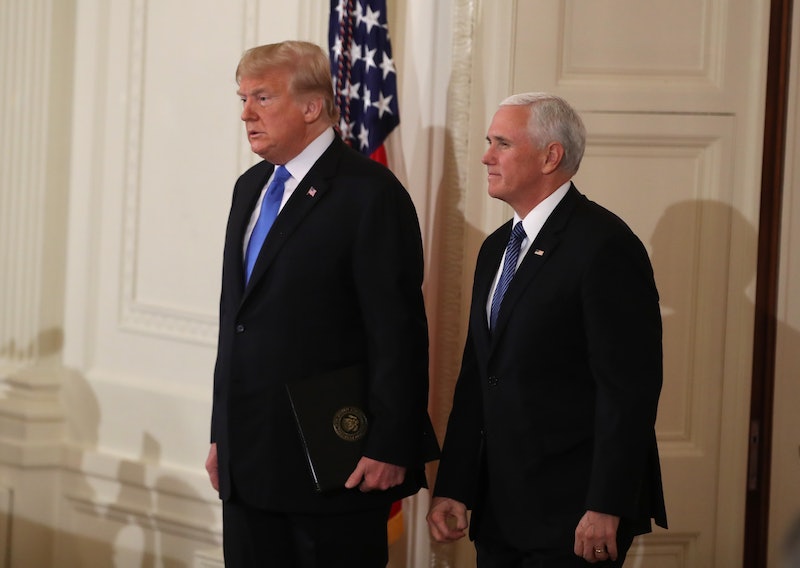 The government has been partially shut down for roughly two weeks, and President Donald Trump has thus far refused to sign off on any government funding bills that don't include money for his border wall. But even as hundreds of thousands of federal employees work without pay, The Washington Post reported that senior Trump administration officials may get raises amid the shutdown. Bustle has reached out to the White House for comment.

Update: After this article was published, Vice President Mike Pence said he would not accept this raise if it goes through, The Hill reported.

Earlier: Senior Trump appointees — including Cabinet officials, top administrators, deputy secretaries, and Vice President Mike Pence — are reportedly expected to receive annual raises of approximately $10,000 on Saturday. According to The Washington Post, the ongoing government shutdown seems to have unintentionally caused these raises.

After Congress was unable to pass a government funding bill on Dec. 21, a predetermined cap on the salaries of senior officials expired, according to the Post, resulting in possible raises that have accumulated since 2013, when the cap was originally established. These raises could go into effect as soon as next week — unless lawmakers take legislative action to extend the pay freeze before Saturday, per CNN.

If the pay freeze does indeed come to an end on Friday, The Washington Post reported that cabinet secretaries could see their annual salaries increasing from $199,700 to $210,700. Pence, meanwhile, is expected to see his salary jump from $230,700 to $243,500, according to the Post.

On Thursday, the House of Representatives — newly controlled by a Democratic majority — passed two funding bills to reopen government agencies affected by the ongoing shutdown, neither of which contained funding for a border wall. The Washington Post reported that the Senate is therefore unlikely to pass these bills, as Senate Majority Mitch McConnell has said that he does not want to send legislation to Trump's desk that he knows the president won't sign.

However, House Speaker Nancy Pelosi has made clear that she and her fellow Democrats will not provide any funding for a U.S.-Mexico border wall. According to The Guardian, Pelosi described Trump's proposed wall as cost ineffective and reminiscent of "an old way of thinking." As a result, Trump signaled to Democrats on Friday that the shutdown could last months — or possibly even years — if that's how long he needs to wait for his wall, USA Today reported.

But if Trump does not relent on the $5 billion he has demanded for a border wall, an increasingly lengthy government shutdown would mean that federal employees would have to go longer without pay, or seek work elsewhere. Meanwhile, top administration officials could benefit from the end of a pay freeze initially passed by a Republican Congress during the Obama administration.

Last fall, Republicans proposed scrapping pay raises for executives in a compromise with Democrats who demanded raises for other civil servants and federal workers, per The Washington Post. However, these negotiations were not concluded prior to the partial government shutdown, so federal employees are unlikely to get the raises their unions have asked for in the near future.