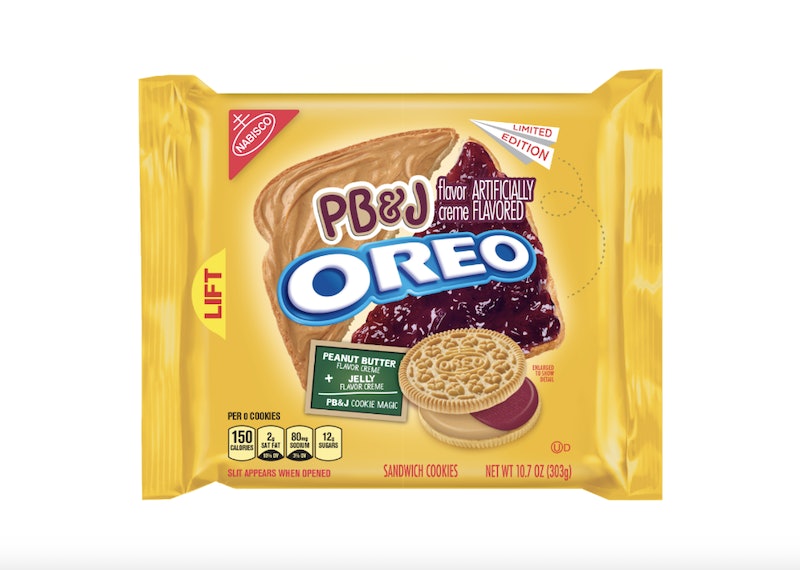 I know, it sounds like something your and your college roommates made up in the middle of the night after one too many lost games of beer pong, but trust me — it's true: PB&J Oreos are a real thing, and they might even already be available at your local Kroger's grocery store.

It started out as a rumor on the morning of Aug. 3, when the Instagram account Junk Food Banter posted a picture of the cookies, and claimed that word was the Oreos would be released exclusively in Kroger stores "as soon as today." But honestly, the news sounded too good to be true, so personally, I wasn't sure — despite the fact that this account is often very reliable in food news. I mean, I didn't want to be let down, and the possibility of a cookie this nostalgic was just too much to accept without solid evidence.

But now, a spokesperson from Oreo has confirmed that not only are they real, but they're available starting Aug. 3 exclusively at Kroger's grocery stores, selling for $4.49 each. They do seem to be limited edition, though, so it's worth nabbing these babies early.

Not to brag too much about my creative culinary genius, but when I was younger, I'd put peanut butter and jelly between two different Oreos and make my own versions of this. And I have to say, they were pretty darn good, so I do hope these official Oreos are as good as they look. Based on nothing but packaging and optimism alone, I'm going to go ahead and guess that they're pretty delicious. *Slams computer shut* *Runs to grocery store*