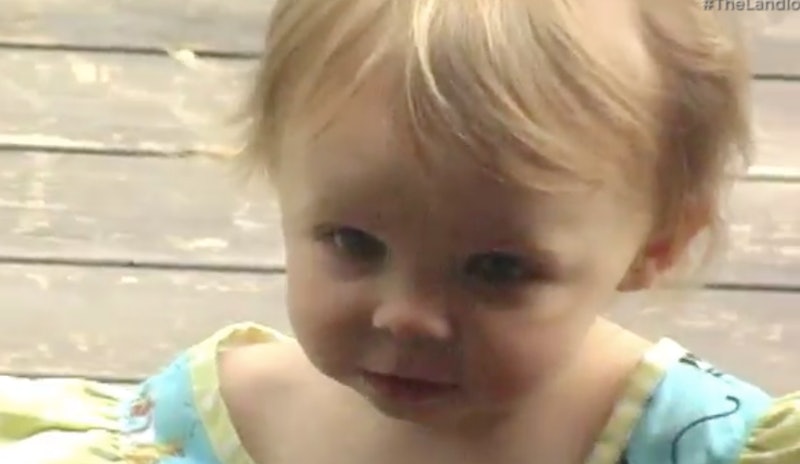 In April of 2007, the Internet quickly fell in love with a fowl-mouthed toddler who famously proclaimed, "I want my money, b*tch" before toppling over in a drunken stupor. A decade later, "Pearl the Landlord" is all grown up and done avoiding the spotlight, giving an exclusive (and, we assume, well-enunciated) interview to Vice in honor of the anniversary of the viral short that made her a pint-sized sensation — so prepare to feel old.

As I stare at my grizzled crone-like reflection, I can't help but look back fondly on "The Landlord," the landmark video that launched the comedy website Funny or Die. The short, which runs just over two-minutes, was created by Will Ferrell and Anchorman's Adam McKay (the pair founded Funny or Die with screenwriter pal Chris Henchy). Shot quickly and on a tight budget, it cast McKay's then two-year-old daughter, Pearl, as the eponymous landlord and Ferrell, as her unreliable tenant. In the video, the baby landlord demands the rent so she can "Get her drink on," and when verbally abusing Ferrell doesn't work, she steals his beer and toddles away. The team reunited later that year for a follow-up short "Good Cop, Baby Cop," where Pearl gets Ferrell to confess to a crime. Both videos are symbolic of the early days of internet sketch comedy, before the site became the home of "Between Two Ferns," "Drunk History," and perfected the art of the celebrity cameo.

With so many quotable lines and adorable moments, "The Landlord" will be forever lodged in our collective memory. The video has since garnered approximately 84 million views, inspired thousands of memes and gifs, and reigns as one of the top viral videos of the decade. We were all guilty of greeting friends in the college cafeteria with a hearty "You pay now!"

Pearl is now 12 years old and the middle school student has quite a few opinions about what makes something funny, which she shares with Vice.

Pearl stresses in her interview that comedy has grown since her dad's video went viral, and though she was the star, the juvenile humor is not particularly to her taste. "Today, I think all the social medias have different types of humor," Pearl explained to Vice. "Awhile ago adults would go, 'Oh, a two-year-old swearing, that's hilarious,' but now I think that would only appeal to maybe a nine-year-old. I don't really find it funny."

Instead, Pearl's preference veers towards YouTube and BuzzFeed when she wants a laugh. And that is not the only place she differs from her director and writer dad — while she likes his early work, she is not a fan of his more serious offerings. "My favorite movies of his are Anchorman and stuff," she told Vice. "The Big Short was boring. It's probably a good movie but I kind of fell asleep during it. It's not really for 12-year-olds."

While we're on the topic of feeling ancient, remember, Harry Potter turns 20 this year and kids these days have no idea what "Dial-up" is. You're welcome!