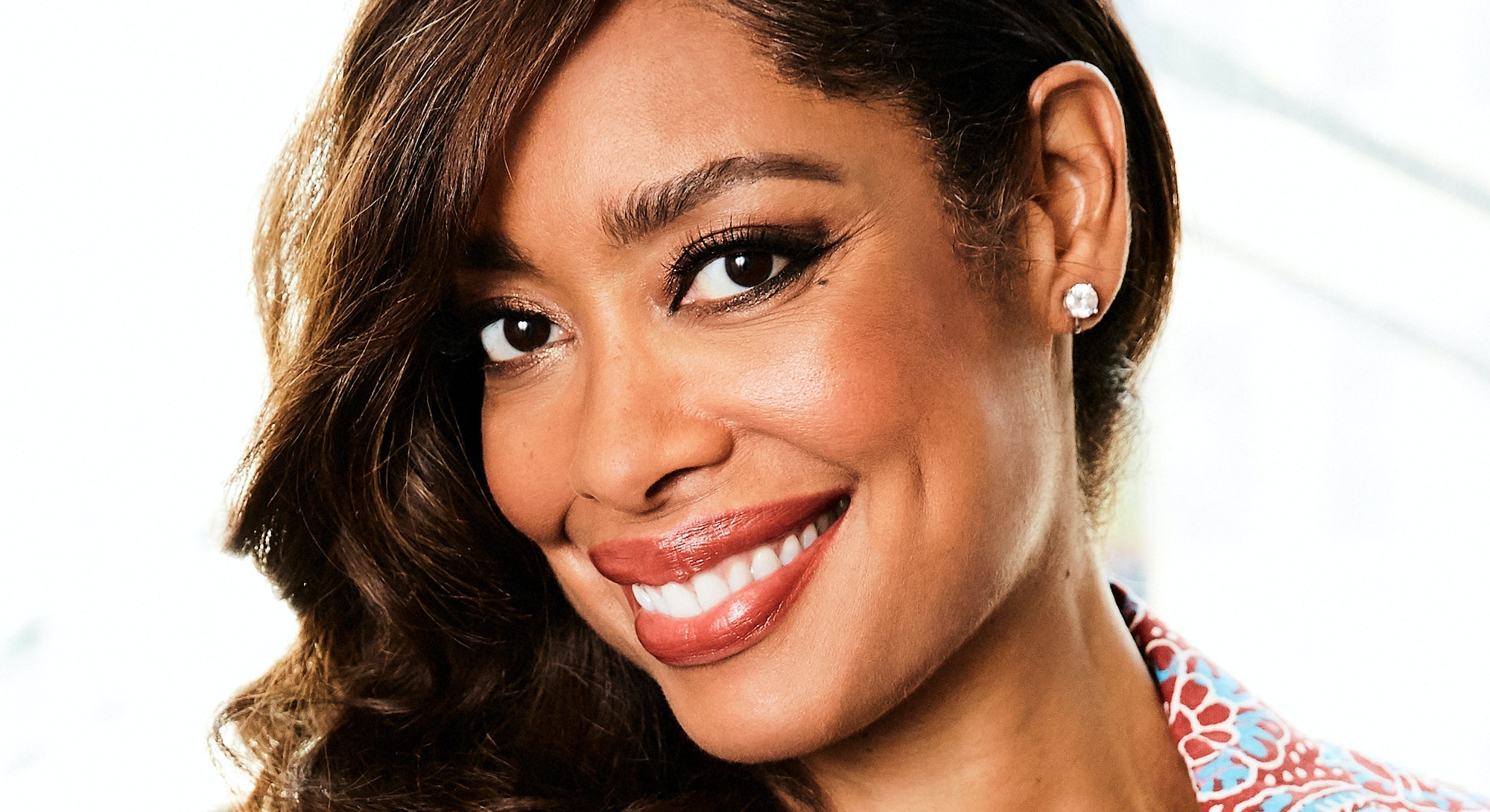 To witness Gina Torres en vivo during a photoshoot is like watching a supermodel at work. Except that supermodel is also a classically trained actor. And that classically trained actor has the sensibility and grit of a born and bred New Yorker. When I meet Torres at the Bustle offices, it's at first hard to mentally separate her from her Suits character Jessica Pearson, the all-powerful law partner at a top corporate firm in New York City. But as we gather in a conference room to have our interview, a curly haired 12-year-old pops out from behind her — it's Torres' daughter, and she has her own list of questions.

"If this room is Hogwarts, where's Riverdale?" she asks, visibly excited by the names of the conference rooms at our offices. Completely unfazed by the photoshoot happening around her, she's like any other child tagging along with her mom on a glam version of Take Your Child To Work Day.

Seeing Torres simply chatting with her daughter about Bughead's hometown is really what shakes me out of the idea that Torres is the all work, no play, calculating center of the USA spinoff Pearson, which just premiered July 17. Granted, she does channel her on-screen character on this day in her Jessica-esque red billowy trousers and a one-shoulder shell top. But she also jokes to me about getting spinach in her teeth, though it’s clear that even if the unthinkable happened, she would shrug it off with a laugh and the ease of the ‘60s Hollywood starlets she says she loves to watch on TCM. And although the reimagined Pearson in the USA spinoff is still evolving into one, it's Torres who is the fully realized woman. During our time together, layers of easy confidence, humor, and grace emerge that seem less Pearson and all Torres. Even Torres' nights off sound a tad more elegant than the typical Netflix marathon-watching-on-the-couch session. “I'm absolutely wearing some loose fitting cotton," Torres laughs when thinking of a quiet Saturday night. "Probably enjoying a meal that I have made for myself and my daughter. And watching an old movie.”

In Pearson especially, we see Jessica shed the weight of carrying a New York firm on her back, and shuffle the deck solely in her own best interest, which is in itself yet another reinvention of the "Black woman fixer" formula.

Torres has no intention of being a real-life "fixer" in the manner of Jessica Pearson or even an Olivia Pope of Scandal fame. But she does find value in bringing that kind of powerful Black imagery to the American pop culture consciousness. Torres welcomes all of these emerging Black characters, telling me that it's been "wonderful" to watch them "make their way into the zeitgeist."

And although the Annalise Keatings of How To Get Away With Murder and the Jessica Pearsons epitomize the superwoman who fixes the world's problems by the episode's end credits, they are a far cry from the racist and problematic "mammy" tropes of Hollywood's early days. "For people of color in the industry, I guess the in-joke within our community was always, ‘Oh, are you gonna are you gonna play the magical Negro?,’" Torres says with zero apology. "I'll hug you through it. I'll be your mother, I'll make everything better, and not need any credit for it at all. I'll just be the invisible mystical Negro in the background."

In Pearson especially, we see Jessica shed the weight of carrying a New York firm on her back, and shuffle the deck solely in her own best interest, which is in itself yet another reinvention of the "Black woman fixer" formula. In Jessica, we get to see a woman who is powerful enough to "fix it all," but doesn't feel the need to. Instead, she puts her needs first, both professionally and personally. In the pilot, for instance, Pearson has moved in with her Suits love interest Jeff Malone, who she had previously kept at bay, to "protect" him from questionable dealings at Pearson Specter Litt. Gratifyingly for Suits fans, we see that Jessica is putting Jessica's needs first.

"The thing that's great about Jessica's character is that she is self-motivated," Torres says, "and now she's redefining for herself what it means to be a woman with power — how she wants to use that power that has been so hard won, and to make sure that she keeps her soul intact while she's doing so.”

Setting Pearson aside, Torres is exceptionally successful in her own right. With a career spanning over two decades, she's undoubtedly a part of Hollywood's elite, making her mark in The Matrix trilogy and as a series regular in shows like Firefly and Alias. While Pearson is a Harvard grad, Torres herself did not attend college but is an alumnus of New York City's LaGuardia High School of Music and Performing Arts, known widely as the school Fame is based on, and which bred fellow A-listers like Jennifer Aniston, Liza Minelli, and Nicki Minaj.

You have to have your own dream and fulfill it for yourself so that you don't resent the track. And that's really the beauty of Jessica. That's the grace of Jessica is that she is exactly where she always wanted to be.

Although her credentials speak for themselves, Torres says she has experienced imposter syndrome, similar to many people of color who find themselves at the top of their fields. Her advice to those currently battling? Learn how to sway the room. "I have felt that as an actor, certainly I've had very tenacious agents and managers who have made sure that I got a shot, that I was in the room," she shares. "And very often I was in the room for a part that was not specifically written for anyone that looked like me. And you have to get on the side of a genius idea really quick. You're in the room for a reason and you can take your space and show everybody why you're in that room. Every opportunity has to be taken."

Jessica Pearson is the epitome of what it means to be Black and excellent — her proverbial track included graduating from Harvard University and becoming partner, practically the blueprint for Black and brown parents who work tirelessly to provide their children with every single opportunity. There's no room for error when it's unwritten but totally known that you have to be twice as good to land an opportunity alongside your counterparts. That track of meticulous perfection leads to burnout, which Black women experience at a higher rate in the millennial set. Torres says it's imperative that women of color remember to stay on the course they want — much like Jessica does — because that kind of unrelenting pressure can crush the soul.

"The most humane thing that you can do is be true to yourself," Torres says. "So the labor is a labor of love, it’s to find your passion and find the thing that you want to do as opposed to fulfill somebody else's dream of you. You have to have your own dream and fulfill it for yourself so that you don't resent the track. And that's really the beauty of Jessica. That's the grace of Jessica is that she is exactly where she always wanted to be. And she got there on her own steam."