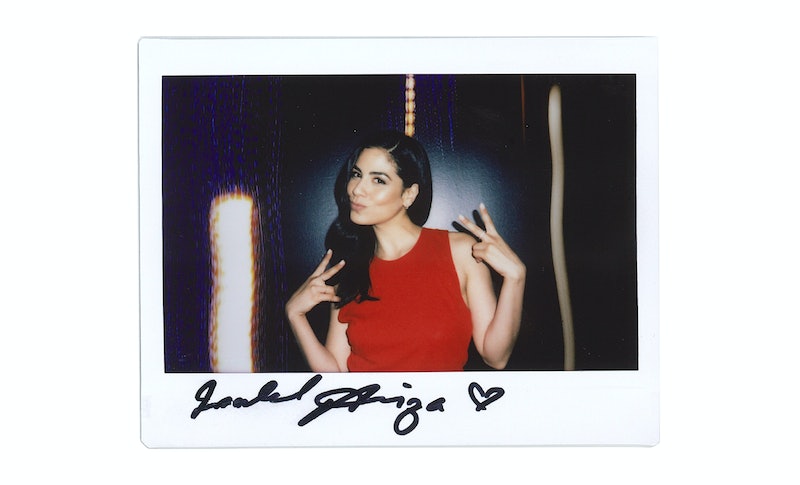 When celebrities hang out with Bustle writers, we want to give them the chance to leave their mark. Literally. So we hand them a pen, a piece of paper, a few questions, and ask them to get creative. The rest is up to them. This time, Pearson star Isabel Arraiza is leaving her mark in the Bustle Booth.

Isabel Arraiza says that playing Yoli Castillo, the sharp witted assistant to Gina Torres' Jessica Pearson on the Suits spinoff is something she could hardly have imagined happening when she was a little girl. Not that she didn't have plans of being a star. Growing up in Puerto Rico, she tells Bustle, reenacting Cinderella scenes with her little brother, Arraiza didn't have many Hollywood role models that looked like her; it wasn't until 1995 that she saw Jennifer Lopez in Selena. "I was having a conversation with a friend the other day and we were going through our list of [celebs] that we still love and respect and I realized they were all white," Arraiza recalls.

While there's still a ton of work to do when it comes to onscreen representation, Arraiza is excited about how the entertainment industry seems to be changing. Pearson is already making history as the first series to feature an Afro-Latina woman as a lead and Arraiza says that even walking into the audition for the USA series was a refreshing experience after years of casting rooms with middle aged white men lining the opposite side of the table.

Arraiza says, "The minute I stepped into the room [for the audition] there was this Afro-Cuban woman greeting me in Spanish and I knew that regardless of whether I got this role or not, my whole expectation of the possibilities in this industry had shifted." The actress adds that working with such a diverse group of people has made her realign her priorities when it comes to her career in entertainment. "I feel seen and empowered...I can aspire to be a producer or a director and to create the stories I want to put out there." Especially stories that "validate our voices as women and women of color."

Her Pearson character, who Arraiza says is funny, smart, impulsive, and three-dimensional, will definitely be someone young people will look up to. Although she adds that that Yoli has evolved from the early days of the script. She says that her character initially "had some traditional narrative attached to it — like the rough and tumble girl who grew up in Chicago to Latinx parents, and I think we very much got rid of that narrative." She says that that's just one sort of experience and while it's valid, it's also time for more kinds of Latinx characters onscreen.

"We’ve seen it, we‘ve done it, we know what it looks like. We know those stories on TV, and they’re dated and I don’t think they’re very accurate," Arraiza says. Fans will just have to tune to see how she and the Pearson cast flip the script.

In the meantime, you can check out Arraiza's Bustle Booth answers below.