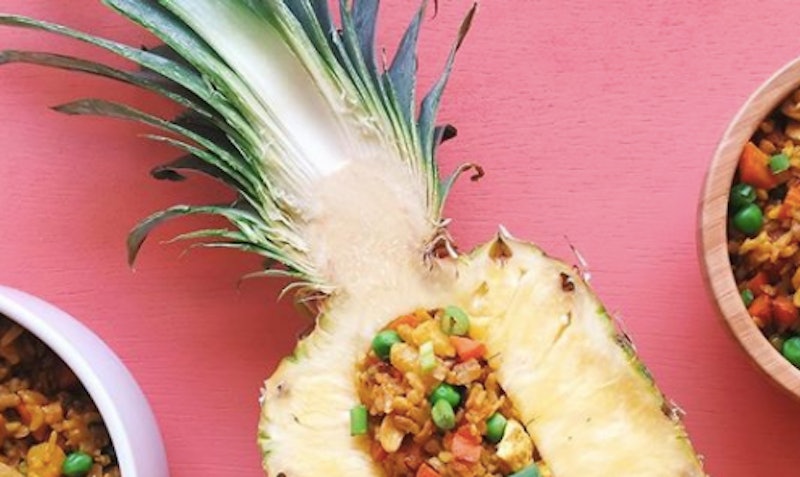 Being online often feels soul-sucking, but occasionally, the Internet brings us something undeniably good. When I learned about Peen Cuisine, I knew this was one of those rare times. Peen Cuisine is the brainchild of 27-year-old Detroit-based illustrator Lauren Hom. The concept is the same as most food blogs: Every week, a new recipe is added to the site. Each recipe is vegetarian with simple ingredients, easy instructions and aesthetically-pleasing, well-lit pictures. Here's the catch: Every recipe on the blog is shaped like a penis.

In the two months since Peen Cuisine launched, Hom has racked up more than 13,000 followers on Instagram. "The reaction has been so positive," she tells Bustle. Peen Cuisine started as a joke among her friend group — after a follower commented "cuisine before peen" on a food-related lettering post two years ago, she'd reference the phrase often. Hom loves to cook, and she realized last year that she could create a website that combined her culinary skills and sense of humor.

"I don’t know a single person I want to be friends with who doesn’t like food or dick jokes," she says. “I thought, ‘I’m going to start a dick-shaped cooking blog. The Internet needs this.’”

Hom started the food blog because she thought it would be funny, she says, but she now realizes that Peen Cuisine serves a broader purpose — it's a reminder that women can joke about sex without shame.

"I'd like to spark a conversation about the double standard of men being able to be sexual creatures and women not being able to," she says. "Men can make sexual jokes, but any time a woman alludes to being sexually interested or makes a sexual innuendo, we’re under harsher criticism."

Hom wondered if she'd be slut-shamed for Peen Cuisine, but she never considered using a fake name or making it an anonymous website. The response has been overwhelmingly positive, she says.

"Most people like sex, and that’s OK. Using food as the mechanism to talk about it is disarming and playful," Hom tells Bustle.

The best thing about Peen Cuisine is that most of the recipes actually look appetizing. Hom says she wants to create food that people actually want to cook, not just bachelorette party fare. "Most of the phallic food I’ve seen on the Internet is food I don’t want to eat," she says. "It’s a copout to have sausage and meatballs."

Hom, who is a vegetarian, calls Peen Cuisine a "meat-free meat blog." The recipes range from fried rice to gorgonzola pizza to cranberry oat cookies. "I like the challenge of plating a caprese salad like a penis," she says. The recipe names reflect her creativity. Spinach and artichoke dip is "Spinach & Artichoke Me Harder Dip," and the instructions read like erotica.

Carve out a dick-shaped hole in your loaf of bread and fill it up with the hot dip. Garnish with parsley if you really want to define your peen. Serve with crackers if you're having company or if you're alone, go ahead and eat it with a spoon. We won't judge.

Hom hopes to eventually tackle vagina-themed food, too. "I want it to be inclusive," she says. Her website includes a section acknowledging LGBTQ+ readers. "We understand that dicks aren't everyone's jam, which is totally cool, but this blog is here to celebrate the men, women, and nonbinary folks who are down with the D," it states.

Because the blog has only been up for two months, she isn't sure what'll happen in the future. She says she'd love to have a cookbook one day, but she isn't rushing things. Right now, she's having fun brainstorming recipes and writing funny content to go along with her posts. "It’s been a hoot," she tells Bustle. "It's validating to know other people share my sense of humor."