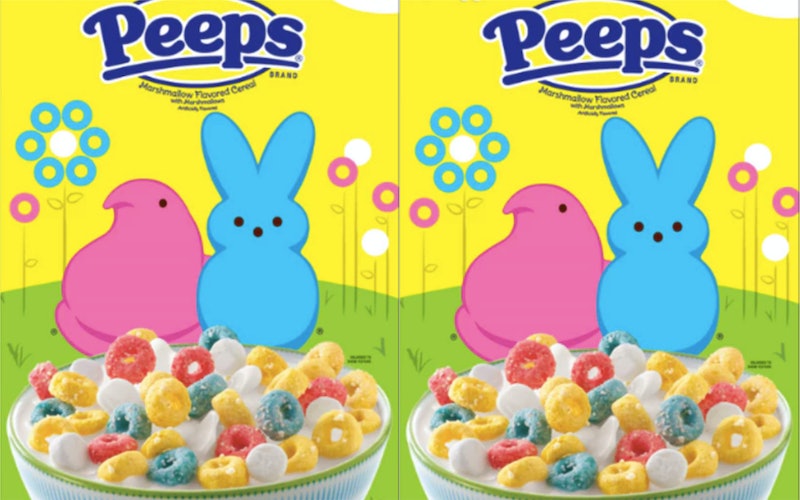 Depending on who you are, you'll either take the following news with delight or disgust: It is almost Peep season. Peeps, as in the iconic fluorescent marshmallow candies that pop up every year in the spring. If you celebrate Easter, chances are Peeps appeared in your baskets (and then in your microwave) for most of childhood; now, though, it looks like they're headed for your bowl. Many of them, actually. Peeps Cereal has already been spotted on store shelves, courtesy of Kellogg's, and it's a big springtime mood.

Discovered at Target by various snack and food Instagram accounts, the find is so new that the product isn't even listed on the retailer's website yet. But early photos depict a bright yellow box with illustrations of two classic peep figures on the outside: a pink chick and a blue bunny. This pastel primary color palette might just be modeled after the actual cereal, too. Based on a photo posted by NYC-based Instagrammers @mnmtwinz, the cereal pieces are blue, yellow, and pink, and marshmallows are added to the mix, unsurprisingly. The accompanying caption reads, "Marshmallow flavored cereal with marshmallows! The cereal has got the same texture as Apple Jacks but literally does taste like Peeps Marshmallows; just without the sugar crystals. It’s strange but it works! The sweetness is a nice balance, not too sweet but not bland. And because it all tastes like marshmallow, you can mix it with nearly any other cereal that you feel needs marshmallow in it."

It was also noted that the product wasn't found in a specific aisle. @Mnmtwinz explain, "It had no aisle location, perhaps because it isn’t Easter time yet, so it might have gotten back stocked." But if that Target had some in stock, it isn't unreasonable to think others would, too.

Another Instagrammer, Los Angeles-based @MunchieBunchie, likened the taste to a number of other favorite grocery store sweets. They report, "They have that same exact vanilla sugary taste! Super sweet but super yummy ... They got super vibrant with milk which I loved (no effect on those last two photos)! The milk is super sugary and sweet at the end too. If you haven’t tried golden Oreo Os, they are very vanillay and almost like a sugar cookie."

The first Peeps were introduced in the 1950s, and since then have reached snack stardom. In fact, next to chocolate, Peeps are the highest-selling Easter snack in the country. But, they're hardly just for Easter anymore; seasonal Peeps have been released for a great number of other holidays, namely Christmas. In 2018, an extra special new Peep was released: the Peppermint Bark Peep. A peppermint-flavored marshmallow is dipped in rich dark chocolate to create the festive, and inventive treat. Peeps don't typically come paired with chocolate, but that doesn't mean they shouldn't.

When Peeps Cereal will officially drop online has yet to be confirmed, but if stores are already carrying boxes, it can't be too long from now. If you can't wait any longer, you might have to search for it. Even if the marshmallows aren't your thing, Peeps Cereal might quickly become a fave.