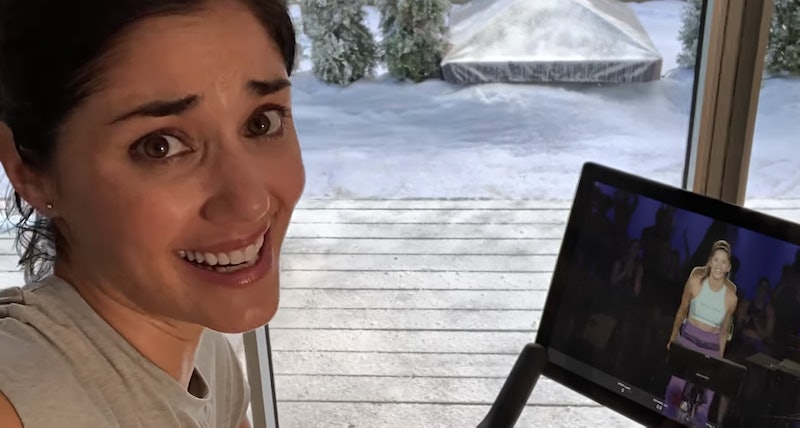 The best part of the holidays are the ads, said no one ever. That aside, there's one holiday ad that's uniting the nation, though perhaps not in the manner the company responsible had hoped. After much backlash, Peloton is defending its holiday commercial that shows a woman named Grace receiving the stationary bike from her husband as a Christmas present. The commercial is titled "The Gift That Gives Back," and ends with Grace gifting her husband with a thank you video montage of herself using the bike. "A year ago I didn't realize how much this would change me. Thank you," she tells him.

The ad initially ran on Nov. 4, but it only recently went viral after people started sharing their — mostly negative — reactions on social media. People have deemed the commercial "sexist," "cringeworthy," and "creepy," all while pointing out undertones of elitism. (Peloton bikes cost $2,245, and the membership for interactive classes costs $39 per month.) The viral criticism culminated on Monday, Dec. 2, when, as reported by The Wrap, the company's stock price dropped 13 percent — though it's unclear if the controversy surrounding the ad affected Peloton's stock. Two days later, Peloton decided to respond.

In a statement released to CNBC, Peloton responded to the criticism by standing by their ad. "Our holiday spot was created to celebrate that fitness and wellness journey," the statement read, claiming that the company received a lot of positive feedback from people who receive the bike as a gift. The statement continued, noting that the company was "disappointed in how some have misinterpreted this commercial," and thanking others for their support.

Peloton might be saying that fans are "misinterpreting" their ad, but audiences would disagree. One Twitter user, @PepperGii, suggested that Peloton's overall message in the clip is for women to recognize that they must "exercise harder/be thinner for your man and then thank him for it." A different Twitter user, @IamJRushing, commented, "Nothing says 'maybe you should lose a few pounds' like gifting your already rail thin life partner a Peloton." Another person, @ryniguez1, called the ad "pretentious" before adding, "All that is missing is the designer doodle dog."

Despite the negativity, there are some who think people are overreacting. "Some people love working out and those are the exact gifts they want," tweeted @eddieb2, "Why on Earth would you think anything different in that commercial?" And user @lily_cornish tweeted that they think the husband simply gave the woman a "generous gift as a means for her to be able to push herself outside her comfort zone and remain healthy for her family."

As the debate rages on, one thing is clear: Peloton just might find itself on the naughty list this year.