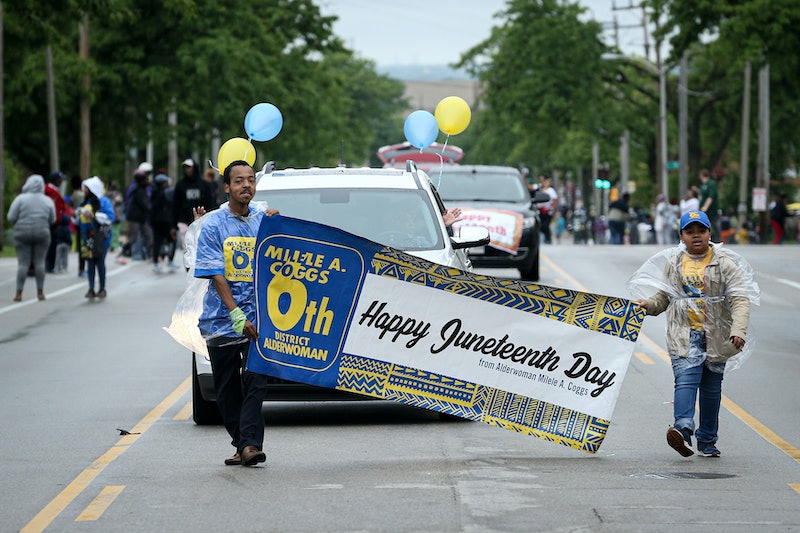 According to a tweet Democratic Governor Tom Wolf posted on Wednesday afternoon, Pennsylvania officially made Juneteenth a state holiday. In doing so, the Keystone State has now joined a list of 45 other states and the District of Columbia. According to CNN, only four other states haven't followed suit yet: Hawaii, North Dakota, South Dakota, and Montana.

"Proud to designate June 19 as #Juneteeth National Freedom Day to commemorate the ending of slavery in the United States," Wolf tweeted on Wednesday. "On this day, let us recognize the importance of continuing to build a nation that truly reflects the self-evident truth that all people are created equal."

Juneteenth is the oldest reported celebration of the ending of slavery in the United States, according to CNN, and it also goes by Emancipation Day. On June 19, 1865, the Union Major General Gordon Granger went to Galveston, Texas, and announced that slavery had ended, National Geographic noted.

That day, Maj. Gen. Granger announced to locals, "In accordance with a proclamation from the Executive of the United States, all slaves are free." His announcement came some two years after former President Abraham Lincoln declared the Emancipation Proclamation, which was intended to free all slaves.

As Newsweek noted, although multiple states celebrate Juneteenth in their own ways by either declaring it a holiday at the state level or simply marking it as a special occasion, it isn't a federal holiday. In 2018, the United States Senate passed a resolution that called for celebrating "Juneteenth Independence Day" but it has yet to pass the House.

Supporters of the resolution noted that a federal level celebration of Juneteenth could encourage Americans to study their country's history more thoroughly. As such, the official text of the resolution stated, among other things, that it supported "the continued nationwide celebration of Juneteenth Independence Day to provide an opportunity for the people of the United States to learn more about the past and to better understand the experiences that have shaped the United States."

Time and again, activists have passionately championed the idea of a broader observance of Juneteenth in the country. In remarks to Teen Vogue on Wednesday, Derrick Johnson, the president of the NAACP, laid out how marking Juneteenth was crucial to keeping democracy alive in America.

"Today's political climate is the result of a concerted effort over many years to teach individuals a revised history: that the system of slavery was related to state’s rights, when in fact it was a treasonous act that this nation must not revisit," Johnson said.

"One of the ways we can prevent another uprising of a treasonous act [like slavery]," he added, "is to recognize milestones like Juneteenth."