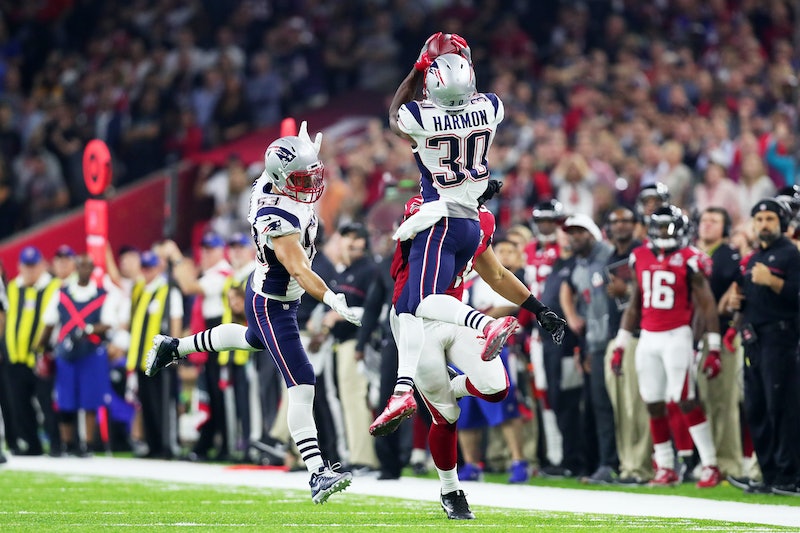 In an unfortunate throwback to 2016, New York Times author Nate Cohn compared the trajectory of the Patriots' comeback at Sunday's Super Bowl game to that of the presidential election, sharing this tweet to remind us that the unexpected can certainly happen.

He's not the only one. Comparisons on Twitter abounded with users describing the experience of watching the Superbowl to that of watching the returns from last year's election on Nov. 9. Just like Hillary Clinton and the election, at the beginning of the night the Falcons were largely expected to win the Super Bowl, but then the game took a drastic turn and the Patriots ended up achieving victory (aka just like Donald Trump in 2016's presidential election).

Interestingly, the Patriots' victory over the Falcons also brings with it some additional political undertones beyond the comparison to the experience of watching election returns. President Donald Trump predicted the Patriots would beat the Falcons. Furthermore, the Patriots' quarterback Tom Brady along with team owner Robert Kraft and Coach Bill Belichick are all known to be friends with President Trump. Thus, these associations likewise somewhat colored the Patriots' victory as one with "Trumpian" undertones, rendering the comparison between Election Night returns and the Super Bowl even more realistic.

New York Times author Nate Cohn uses a visual of a predictability scale to draw parallels between the 2016 presidential election and the 2017 Patriots vs. Falcons Super Bowl Game

A Twitter user uses "election humor" to reassure the Falcons that, while they may have lost the Super Bowl game, they still retain the "popular vote," comparing the outcome of the game to election night results which saw Trump capture the presidency while Clinton won the popular vote.

Echoing sentiments expressed by Bernie Sanders supporters on Election Day after Clinton lost to Trump, this Twitter user suggested that Sanders could have "beaten" the Patriots.

This Twitter user seemingly expressed gratitude that while outcome of the Super Bowl did feel like that of Election Day, thankfully there are far fewer serious and far-reaching consequences to achieving a Super Bowl victory than there are to winning the presidency.

At an earlier point in the evening, Nate Cohn tweeted that Atlanta had an "86 percent chance of winning," prompting this Twitter user to "blame Nate" for appearing to hand off victory to the Falcons too soon. This certainly was also a trend on Election Day, as many polls (inaccurately) predicted that Hillary Clinton would have a large margin of victory.

A Twitter user cautions that people should have learned to "expect the unexpected" from the presidential election and that, resultantly, the Patriots' victory should not be a big surprise.

Overall, while obviously not having the same level of significance as the presidential election, the Super Bowl nonetheless served to demonstrate yet again that very little is certain when it comes to knowing outcomes of high stakes events. Indeed, 2017 is proving to be just as unpredictable as 2016.