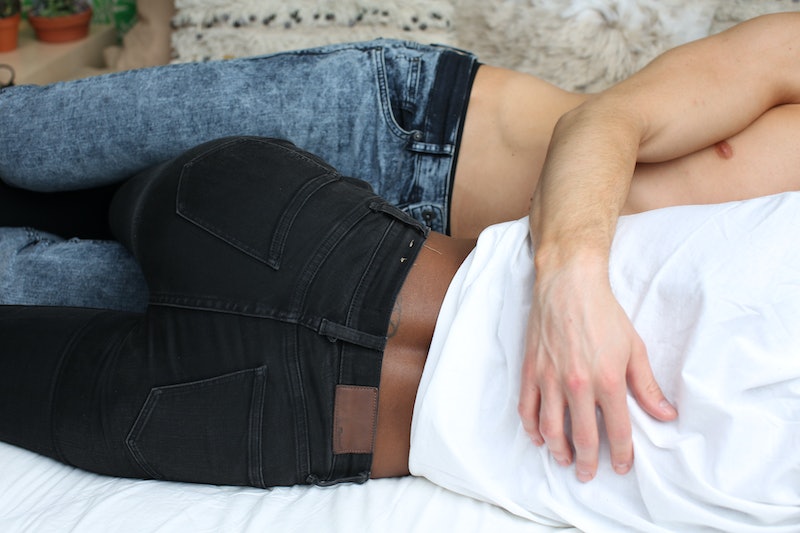 I am interrupting your current broadcast with important SexPods news: there are actual people who’ve had sex with AirPods in, according to a recent survey that has f*cked me right up. So, before we continue. I’m going to need a list of whomst among you is guilty, and I will also be requiring a complete playlist of your AirPod sex music. What freaky disgrace you have brought to Steve Jobs.

The survey comes from TickPick, a ticket-buying website, who surveyed 1,010 people using Amazon's Mechanical Turk about music and making the nasty. TickPick asked the question, “How does the music you listen to affect your sexual preferences, attitudes, and fetishes?” But somewhere along the way, they answered a question we didn’t know we needed to ask. Given the small sample size, it’s important to take these results with a hefty grain of salt. Then, I’m going to need you to shove that salt grain into your ears so you can STOP LEAVING YOUR AIRPODS IN DURING SEX.

You can thank/blame Mashable for highlighting the particularly distressing part of the survey which found 17% of people who own AirPods have left their AirPods in while having sex.

Amazing! Horrible! Wonderful and disgusting! It’s like doing the dirty with someone who’s got their Bluetooth in except the Bluetooth is playing Bon Iver’s latest single on repeat. While TickPick didn’t specify how many people that actually included, it is still more than zero, which is what the number should have been.

“The wireless earphones could offer simultaneous enjoyment of wildly different music tastes, although this is just one scenario,” the study very kindly offers as justification. However, this explanation is even more buckwild. Imagine dimming the lights, setting the mood, you and your partner popping in your respective AirPods, and blasting completely different music.

If it’s any consolation, having similar musical tastes (and, in turn, not needing to listen to different sex playlists on your AirPods) seemed to correlate with sex satisfaction. “Nearly 80% of people with similar musical tastes to their partner were satisfied with their sex life,” the survey stated, “compared to just 43.6% of those with different music tastes.”

Additionally, people who enjoyed the same music also got freaky more often. “Those with similar music tastes had sex an average of eight times per month, while diverging musical interests corresponded with just six times each month,” the survey found. “Moreover, partners who shared similar music preferences were over three times more likely to listen to music during sex,” it continues, “suggesting a positive correlation between background music and sexual satisfaction.”

A 2016 survey from Apple Music and Sonos found similar links between sex and music. “The big takeaway is that music out loud means more sex,” the survey found. “67 percent more sex, in fact, for those who listen to music out loud the most versus those who don’t at all.” People who listened to music during sex had, on average, 52 more “lovemaking session” (the survey’s words, not mine) over the course of the year.

“We also know via biometrics that couples tracked in the study enjoyed 37 percent more active time in the master bedroom for the period of time music played out loud in the home,” according to the Sonos survey. “Almost one in five feel music played aloud during sex makes the act better, with 47 percent attributing that feeling to music making sex more exciting and 44 percent saying music makes it more rhythmic.”