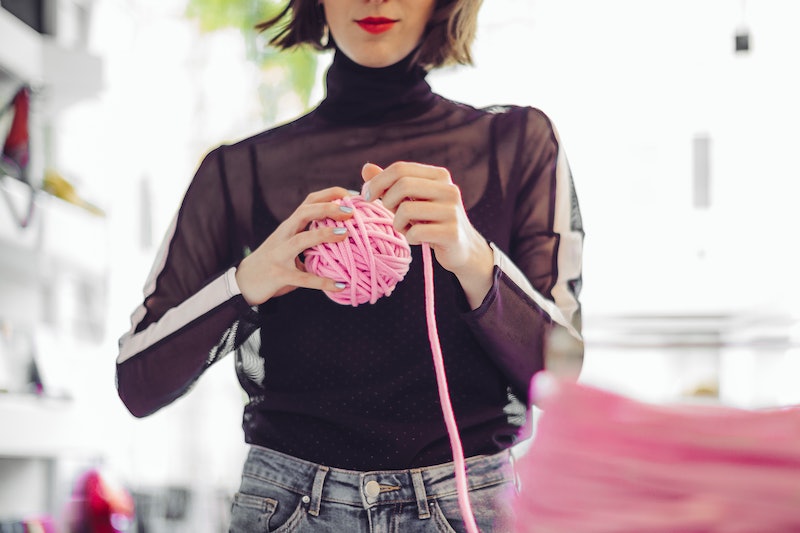 Over the last few years, Finstas, aka fake Instagram accounts, have become exceedingly common on the app. What started out as private accounts for celebrities and influencers, or an alternative platform for people who didn't want to show their whole network their candid selves, now appeals to a broader range of users. But during quarantine, you may have noticed a different kind of secondary account from people in your "Suggestions for You" feed: one devoted entirely to hobbies.

These accounts feature interior design, DIY crafts, home cooking, home-making, dogs, books, and more. Unlike a lifestyle blog, the content creator isn't a huge presence on the account. (You can tell a page is secondary if it is public, if the bio links back to another account, or if it's a new account and you already have a lot of mutual friends — which by nature, makes it not quite a Finsta.)

The biggest difference between a Finsta and a Hobby Gram is that the latter isn't meant to be a secret. Typically, the content follows a singular theme. For example, you might find a Hobby Gram with a handle like "OurFarmHouseReno" or "DrawWithMe." All of the posts will be centered around renovations or drawing, without any personal posts that would only make sense to a familiar audience.

When Instagram suggested that I follow a new account that a few of my close friends were already following, I realized my friend Kay had created a second Instagram to showcase her quarantine cooking and DIY interior design efforts. "It's not a secret! I'm just not promoting it," Kay, 33 tells Bustle. "Honestly it started out as a joke. We've been cooking so much more during quarantine, and wanted to make a digital scrapbook of our best recipes and then it turned into a real account."

Kay explains that she made a second account because she didn't want to crowd her regular followers' feeds. "Not everyone is going to want to look at my food every night, I know that," she says. "I like the idea of putting this kind of content out there into an anonymous space, it makes me feel more creative and open and there's this sense of possibility, like I might connect with someone I don't know who finds my page because we share the same interests." Though Kay admits that she wouldn't have the time or interest in making a Hobby Gram if it weren't for being stuck at home in quarantine, she plans on sticking with it. "I think it will evolve over time, but I'm going to keep putting energy into it because it makes me proud to look at what what I've done."

Peter, 30, became a puppy owner in quarantine. The combination of free time and a new interest led him to create a secondary Instagram account. "It's just for endless, shameless, 24/7 puppy content — it's also a very gratifying [hobby]," he tells Bustle. Though he and his wife did not expect much to come of the account, they were pleasantly surprised by how many people sent in messages thanking them for sharing positive content during a hard time. They even found their four-month-old Bernedoodle's siblings through the account. "Even if it's just silly, superficial, light content, it's nice to know it's making some people happy right now," he says.

For Taryn, 32, a secondary Instagram account was not just the start of a hobby, but also an opportunity to experiment with a new business. With her full-time job in commercial real estate on hold during the pandemic, Taryn knew she wanted to take full advantage of the extra time on her hands. The goal, Taryn says, is to eventually be a full-service domestic skills blog, cafe, and storefront, but for now, it's essentially a Hobby Gram. And while she posts similar content in her main feed — tablescapes, recipes, DIY beauty projects — an independent account is helping to give her the motivation and confidence to see it as a future business. "I think once it grows it will be more about the brand than it is about me personally, but I want the account to have a personality of its own that everyone can relate to."

Though Taryn says she has a lot of work to do in terms of building a following and reaching people who share the same interests, she's up to the challenge, especially since she has the time. "I recognize that social media is one of our current culture's greatest gifts of expression. So, while my end goal is to be handing people homemade banana bread over a counter in my own cafe and general store, I am trying very hard right now to appreciate Instagram for the connectivity it offers."

More like this
Manifest Your Dream Life With The Viral 'Tinkerbell Effect'
By Meguire Hennes
What Does POV Mean On TikTok? The Popular Acronym, Explained
By Emma Carey
Here’s How To Get Verified On TikTok
By Emma Carey
7 Birthday Instagram Story Ideas Your Friends Will Love
By Emma Carey
Get Even More From Bustle — Sign Up For The Newsletter