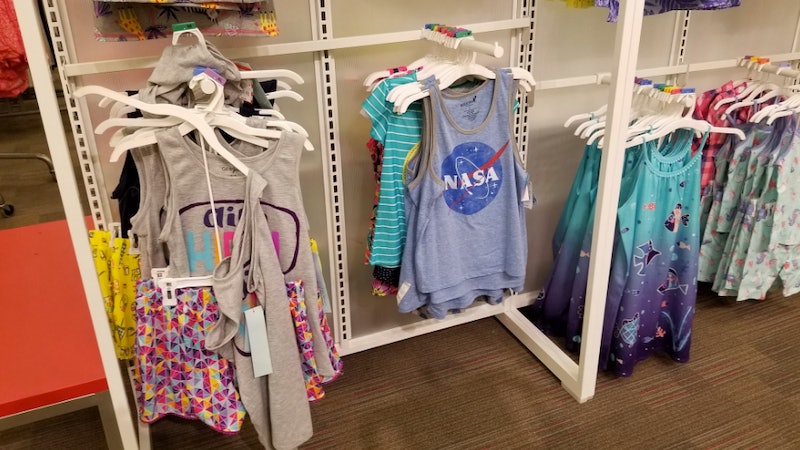 It seems like viral memes spread like wildfire these days, and even the best memes aren't without controversy. That's why the viral photo of boys NASA tank tops in the girls section of a store lit up the internet early this week, and people have mixed reactions to Katie Hinde's small act of resistance.

Editor's Note: After we published the story, a Target representative reached out to inform us that an assortment of NASA tees for girls are available for purchase.

Hinde's Tweet went viral early Monday, when she posted a picture of some NASA-branded tank tops in what looks like a Target store (to my Target-obsessed eyes). The tank tops were clearly in the girls section of the store, and Hinde accompanied the photo with a caption that said: "Did I just take a bunch of NASA tank tops from the boys section & put them in the girls section? Yes. Yes I did."

Hinde's Tweet quickly garnered a lot of attention, gathering more than 17,000 retweets and 84,000 likes. Then it made its way to Instagram, where it was posted by the account Female Collective and spread like wildfire from there. Like almost any viral post that has social implications today, there were people who agreed with Hinde's actions and people who didn't. To her credit, she retweeted people who disagreed with her and posted a second Tweet about 12 hours after the first, saying: "Getting a lot of feedback- varying among positive, constructively critical, & toxic- so after work I'll post a longer essay. Thanks all!"

Here's the original tweet, which quickly went viral. But not everyone agreed with what Hinde had done.

This tweet had an important point to make about white feminism.

This one had another interesting point to make. Hinde retweeted both messages and followed it up with another one of her own.

I'm glad to see all the parties here acting respectfully, and I think Hinde's response should be interesting to read.