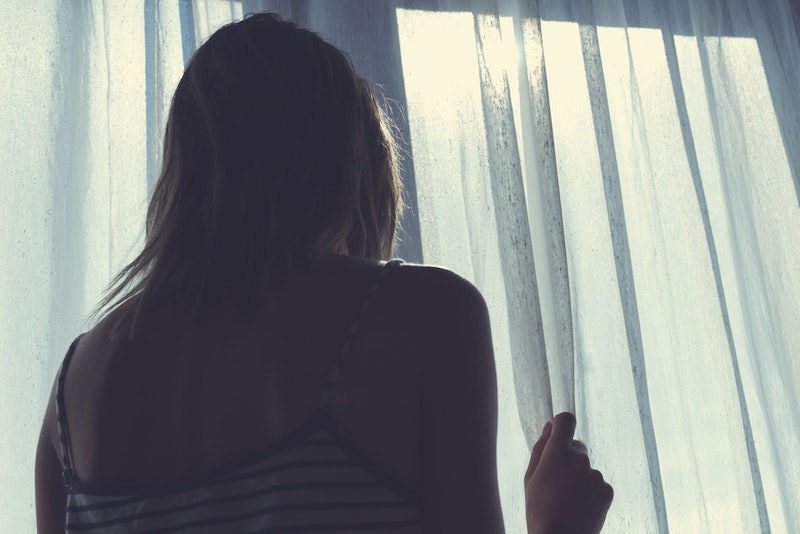 When high profile cases of domestic violence hit the news, inevitably someone asks why the survivor or victim didn't leave earlier? But the real reason people don't leave their abusers is incredibly complicated. In fact, the National Domestic Violence Hotline says the time when a person tries to leave their abuser is often the most dangerous for a victim of abuse. The truth is that it's time to stop asking why victims of domestic violence stay and look to the real causes of abuse and intimate partner violence.

Beth Meeks, capacity technical assistance director for the National Network to End Domestic Violence (NNEDV), tells Bustle, “Most women do try to leave multiple times. The fact of the matter is, the offender doesn't let them go; that is different than choosing to stay.” Meeks says she’s worked many causes where victims have tried filing police reports, getting orders of protection, and getting whatever help they can, but they are “hunted” when they try to leave their abuser. And when a person's abuser is their spouse, Meeks says they often have access to all their financials and know everywhere they might go to hide.

“A batterer knows everything about you, so he can go to the bank and shut down bank accounts and take money,” Meeks tells Bustle. “There are a lot of batterers who have access to a lot of information that is the information you would use to get away from them. They can compromise that information and block it and use it against you.”

One high-profile case of domestic violence that was recently re-examined is the 1993 case of John Bobbitt and Lorena Gallo, then-Bobbitt, which was the subject of the Lorena docuseries that premiered on Amazon on Feb. 15, 2019. Lorena Gallo was vilified in the media at the time for cutting off her then-husband John’s penis, an act Gallo claims she perpetrated in self-defense after Bobbitt allegedly abused her over the course of their relationship. Now that the media and the public are more willing to stop looking at Gallo as a punchline, there are still probably questions about some of the choices she made. Like why didn’t Gallo leave Bobbitt instead of committing such an extreme act of violence?

In the '90s, the domestic violence behind the Bobbitt case got pushed so far to the periphery that it was almost a footnote to the plethora of Lorena Bobbitt jokes that emerged instead. Although the facts depicted in the Lorena docuseries regarding the alleged domestic violence Lorena endured were publicly available in the '90s, the media chose not to talk about them, USA TODAY reports. But the docuseries brings those pieces of evidence back to the forefront, including a lot of the trial footage, says USA TODAY.

This included some of Gallo’s testimony, and “long stretches of her describing rape and abuse are included as she sobs on the stand,” says USA TODAY reporter Kelly Lawler. “Multiple witnesses testified about the abuse she suffered from her husband, including evidence of injuries and of symptoms of post-traumatic stress disorder,” Lawler adds.

If you're asking why Gallo didn't just leave instead of committing this act of violence, for which she was found not guilty, the reason is that sometimes, trying to leave can turn deadly. According to a report by the Centers for Disease Control and Prevention (CDC), more than half of the deaths of American women are related to intimate partner violence, The Atlantic reported in 2017. The CDC analyzed the murders of women in 18 states from 2003 to 2014, says The Atlantic, and found that 55 percent of the 10,018 deaths were caused by a former or current partner or the partner's family or friends. In 93 percent of those cases, the perpetrator was a current or former romantic partner, says The Atlantic.

“Many battered women do not see that as battering when it begins,” says Meeks. “And, so, what they do think is we have a communication problem. And again, most of us, wanting to be good partners, will accept part of the blame, right? What can I do to make things different?”

Ultimately, domestic violence is about one person having power or control over another, says the National Domestic Violence Hotline. The question shouldn’t be why victims of domestic violence stay, because their abusers really don't give them a choice. The real question is why people choose to abuse in the first place.