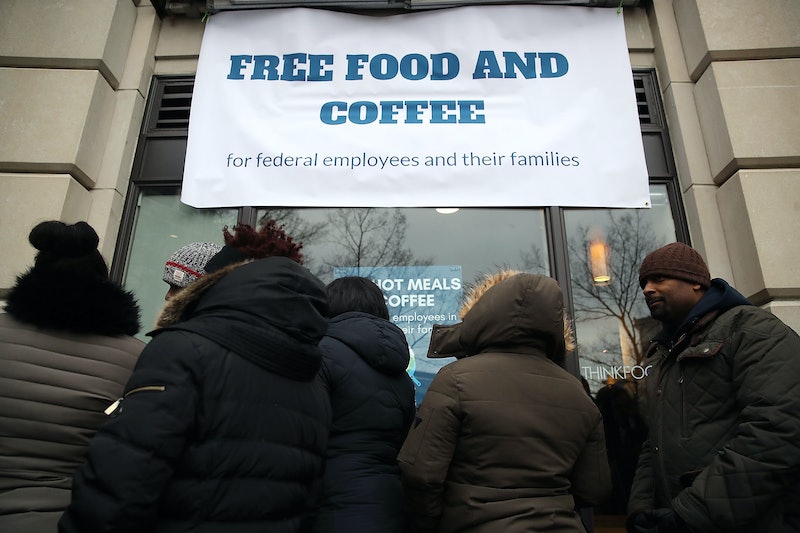 The longer the ongoing partial government shutdown continues, the more challenges it is presenting a variety of U.S. residents, including some of those who rely on government help for covering rent. If it continues much longer, people living in subsidized housing could face eviction, according to several reports.

Many of those who will feel the impacts first are the elderly, according to a report by The Huffington Post. In a recent letter sent out to hundreds of tenants in Arkansas, Louisiana, Missouri, and Mississippi, property management company Tri-State Management recently warned residents who receive financial help through a U.S. Department of Agriculture (USDA) rental assistance program that they would soon be responsible for covering "basic rent" on their own, should the government remain closed come February. HuffPost reports that the majority of folks receiving USDA rental assistance are elderly.

“Due to the government shutdown, all government agencies are on furlough until further notice," the company wrote in a note, which was shared to Twitter. "This means no rental assistance payments will be process until they return to office. As of February 1, 2019, all tenants will be responsible for full basic rent."

In response, Arkansas Sen. John Boozman told the Arkansas Democrat-Gazette in a statement that he hoped President Donald Trump would successfully negotiate the government's doors back open.

"I am hopeful that President Trump's proposal to reopen the government will bring congressional leaders to the table to negotiate so Arkansans who qualify for and rely on government housing assistance won't be faced with an interruption in aid," the statement read. "I will continue working with the White House and my colleagues from both sides of the aisle to find a solution to end this uncertainty."

Sen. Boozman also told the paper that he had been in contact with USDA, well as the Department of Housing and Urban Development (HUD). They reportedly told him that payments for January and February would not be affected by the shutdown. Tri-State Management, the company whose notice received national attention over the weekend, also told the paper that they were pushing rent due dates to Feb. 20.

Although there are rumors that tenants who lose their subsidized housing assistance as a result of the shutdown could be faced with eviction, whether or not that's legally permissible is not entirely clear.

Economic instability and housing insecurity is an issue that impacts thousands upon thousands of Americans, but unfortunately, there is no precise data on its prevalence, even with amount of people relying on government assistance to fund their housing costs. It's a difficult phenomenon to measure, although HUD recently announced that it plans to work on developing a housing insecurity index, inspired by USDA's food insecurity index.

That being said, should the shutdown prevent rental income assistance from being disbursed, its immediate and long term economic impact would be difficult to predict. What is true is that the shutdown is taking a toll on not just federal employees, but private citizens as well. The extent of its impact remains difficult to quantify.